The sub camp was housed in an existing apartment block.

Jews from Poland and other European countries.

In the early spring of 1943, the prisoners were probably transferred back to Auschwitz II-Birkenau.

The History of the Sub Camp Altdorf

Altdorf sub camp was located in the village of Stara Wieś near Pszczyna. It is now part of the city of Pszczyna located in the western part along ul Rybnicka.

Tiergartenstrasse4Association was unable to determine the exact date of formation of this sub camp. The few witnesses located after the war remember that the Altdorf sub camp was founded in late summer or early autumn of 1942.[1] A hint as to the existence of the sub camp Altdorf is an order from the commandant of Auschwitz concentration camp dated November 2, 1942 [2], which required SS men to travel to the “Pszczyna forest detachments” (Plesser Forstkommandos) which were regarded as travel outside of the Interessengebiet (Zone of Interest).

For the purposes of the sub camp Altdorf, some rooms of a residential apartment building near the brickyard in the village of Stara Wieś were adapted.

In the Altdorf sub camp there were about 20 prisoners, Jews from Poland and other European countries. [3] The prisoners were transported by truck directly from the main camp at Auschwitz and were quartered in the cellar of the residential building. There were two rooms, one served as a sleeping room, while the other – smaller – was used as a kitchen. A stove was installed and one of the prisoners, probably a chef by profession cooked food for both the SS guards and prisoners. Food provisions were brought periodically by truck from the main camp at Auschwitz.[4] Prisoners slept on wooden bunks also brought from Auschwitz, with straw and blankets for covers. The prisoners entered the cellar through the basement side entrance, which was located behind the building. In the courtyard behind the building, every day there was a brief roll-call, supervised by one of the SS guards.

After being counted the prisoners went to work in the nearby forest about 500 meters from the sub camp. At work they received a crust of bread and a piece of sausage, black pudding or cheese. Their work consisted of clearing forest-land, digging up the roots of fallen trees, turning soil and planting small spruce trees.[5] Officially, their employer was the Pszczyna Forest Authority (Oberforstamt Pless). It is likely, as in the case of the sub camp at Kobiór, that the harvested trees, especially branches and the waste material, were used as fuel for burning corpses in the pits of Auschwitz II-Birkenau camp where the Sonderkommando 1005 action had begun.[6] Returning to the sub camp the prisoners carried on their backs the blocks of wood, which were stored in the basement of the apartment block. Working tools were stored in a shed in the forest. After returning from work (at approximately 15.00 hrs – 16.00 hrs), there was again a brief roll-call and the prisoners were locked in the cellar for the night.

The SS occupied two rooms on the ground floor of the residential building, one of which was intended only for the commandant. From the accounts of witnesses these rooms contained only wooden beds and a table borrowed from one of the families occupying the other apartments in the building.[7] The prisoners were escorted to work by one or two of the SS guards. It was not until lunchtime that they were joined by the other guards. At night the prisoners were guarded by two SS men, one who stood guard in the cellar, and the second who walked around the outside of the apartment block.

Witnesses have reported that the behaviour of the SS towards the prisoners was reasonable and it seems that among the guards there was a fairly relaxed atmosphere. Officially, the prisoners after finishing work were not allowed to leave the room in the cellar other than for their toiletry needs – there was a latrine outside.[8] Occasionally they were allowed to leave the cellar and sometimes they witnessed the SS guards shooting at tin cans placed on a wooden pole. The bored SS guards also took up gym exercises. They practiced on gym poles constructed by the prisoners and set up in front of the apartment block. Sometimes they were accompanied in these exercises by one of the prisoners, a pre-war Jewish boxer. Outside the apartment block, there was a small store-room, where rabbits and chickens were kept. These animals after being killed were eaten by the SS guards but not by the prisoners. Witnesses recall that the SS men often got drunk. Nevertheless, from the sub camp Altdorf there were no escapes. Prisoners confided with other civilian occupants of the apartment block that “they (the SS) are not bad” [9]

The sub camp Altdorf was too small to have facilities for dental and medical care for the prisoners and SS guards. If necessary, patients were transported to the main camp in Auschwitz for treatment.

Most basic needs of the prisoners and SS guards were provided for in the sub camp. This applied to for example shoe repairs which were undertaken by one of the Jewish prisoners’ named Lanzbergier who was a shoemaker by profession. As Łucja Anna Larysz a local resident recalled: “From time to time the SS men brought him to us and guarded the prisoner all day while the shoemaker repaired the shoes. The material needed to repair shoes such as leather skins, hooves, and twine they took from my husband without any compensation…..Shoes were always repaired by the same prisoner. Coming in the morning he brought a piece of bread. He worked until the evening; dinner was not brought to him. If the SS man guarding him was a good man then he allowed me to give him (the prisoner) for dinner a bowl of soup, probably because the SS man himself wanted some cooked food. It happened onetime that an SS guard left a prisoner in our apartment under the care of my husband and left (…).”[10]

It also happened that the civilian inhabitants of the apartment block surreptitiously left food for the prisoners, even though it was strictly forbidden.

[6] Sonderkommando 1005 was the code name given to the coordinated action to excavate and burn the bodies of the victims of Nazi crimes in occupied Poland and the East. Prior to August 1942 victims were buried in mass graves. This included victims of the Nazi occupation of Poland from September 1939 and other Eastern European countries and Jews and other victims killed in the Nazi death camps, Treblinka, Belzec, Sobibor, Kulmhof, Maidanek and Auschwitz. Also the victims of the Einsatzgruppen in the Soviet Union. In 1942 the Nazi leadership decided to erase the evidence of their crimes and appointed SS-Standartenführer Paul Blobel to lead Sonderkommando 1005. Blobel began his experiments to find the best method to excavate and eradicate the remains of the victims in Kulmhof in June 1942. By September 1942 he had developed a simple method through the use of field crematorium built in the ground from brick and fuelled with wood, branches and oil. In September 1942 he invited representatives from Auschwitz concentration camp to visit Kulmhof to view these methods. The commanders of Auschwitz themselves were then tasked with implementing Sonderkommando 1005 for the tens of thousands of victims mainly Jews murdered in the so called White and Red bunkers in Auschwitz-Birkenau and buried near the Birkenau camp. It was likely one of the tasks of the Forestry sub camps of Auschwitz to gather wood and branches to be transported to Birkenau and used for fuel to burn the excavated bodies.

[7] The residents of the building on ul Ceglana where the sub camp Altdorf was located were not displaced.

Little is known about the guard unit of sub camp Altdorf. Most likely, it was about 10-12 SS men, one of which was an SS-Unterscharführer who served as the Kommandoführer.

The Evacuation of the Sub Camp Altdorf

We were unable to determine when Altdorf sub camp was finally dissolved. Witnesses recall that in February 1943, the detachment was still in Stara Wieś. Probably the sub camp was closed in the spring of 1943.

The Post War History of the Former Sub Camp Altdorf.

After the evacuation of the sub camp in 1943 the apartment block was again occupied by local residents.

The Preservation Status of the Former Sub Camp Altdorf

The sub camp Altdorf was set up in an apartment building in the village of Stara Wieś near Pszczyna. [1]

This apartment building still exists and is located on the left-hand side of the road at the end of ul Cegielniana in Pszczyna. It’s a simple building with a high attic. The roof is flat. It is now, as before and during the war inhabited.

In the cellar are still the rooms where the prisoners slept. The prisoner entrance to the rooms in the basement at the rear of the apartment has now been bricked up.

Nearby are the remnants of the old brickworks. There is some evidence that prisoners from one of the other forestry sub camp of Auschwitz, Radostowitz worked in the brickyard located in Stara Wieś in the immediate vicinity of the sub camp Altdorf. [2] Whether prisoners from the Altdorf sub camp also worked there is unknown.

[1] Stara Wieś was incorporated in 1945 into the city of Pszczyna and is still one of its districts.

[2] Information derived from the testimony of Anthony Pastuszek. In witness statements related to the sub camp Altdorf no information was found confirming that this was indeed the case.

At the building, as well as in its vicinity there is no commemoration or memorial of the Auschwitz sub camp.

The Auschwitz-Birkenau State Museum visited the site of the former sub camp Altdorf on 17 November 1967 and took four photographs including:

Topography of the Sub Camp Altdorf 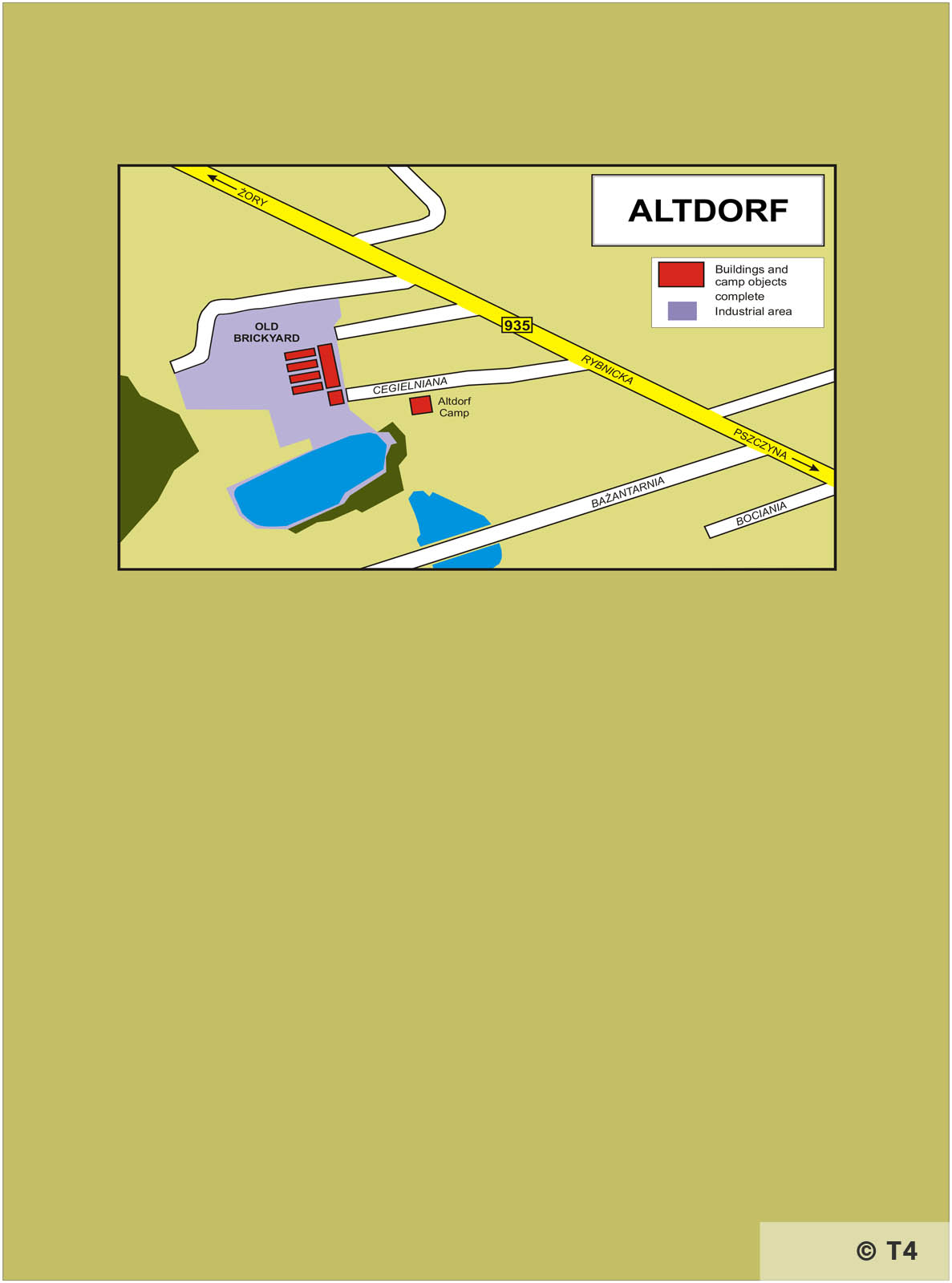 Map of of the former Altdorf sub camp. T4 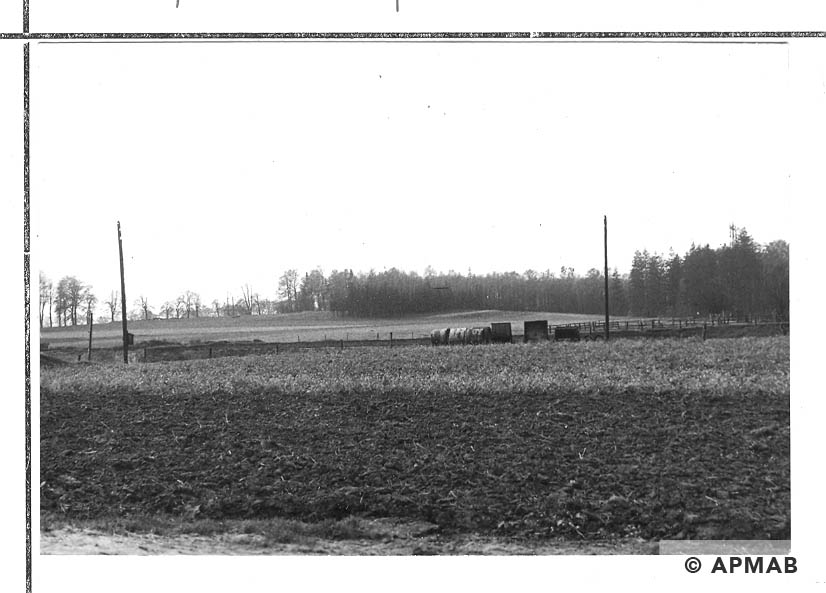 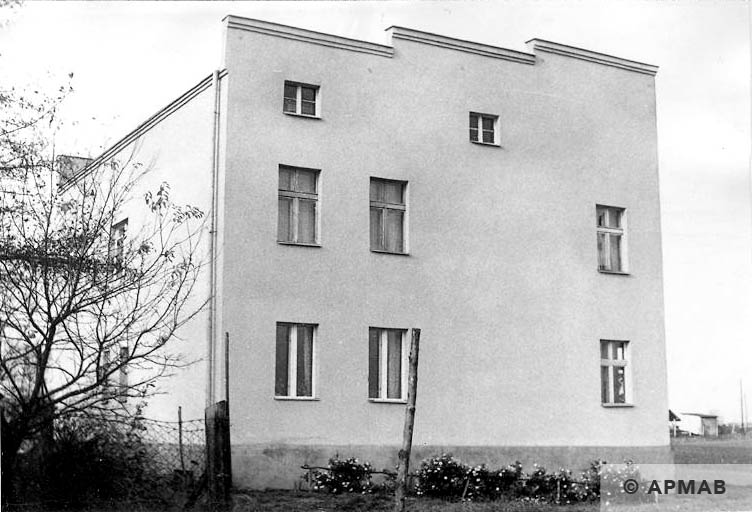 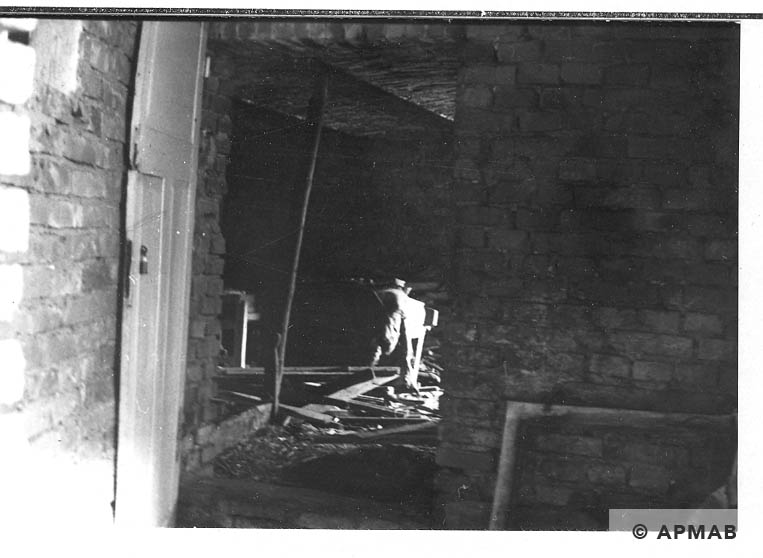 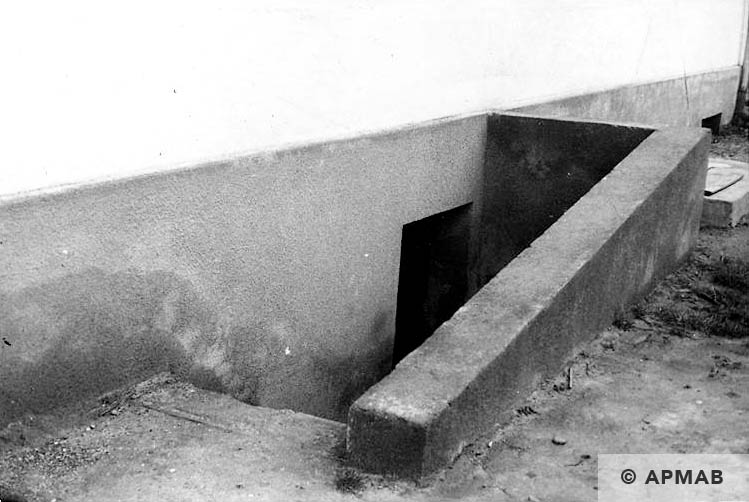 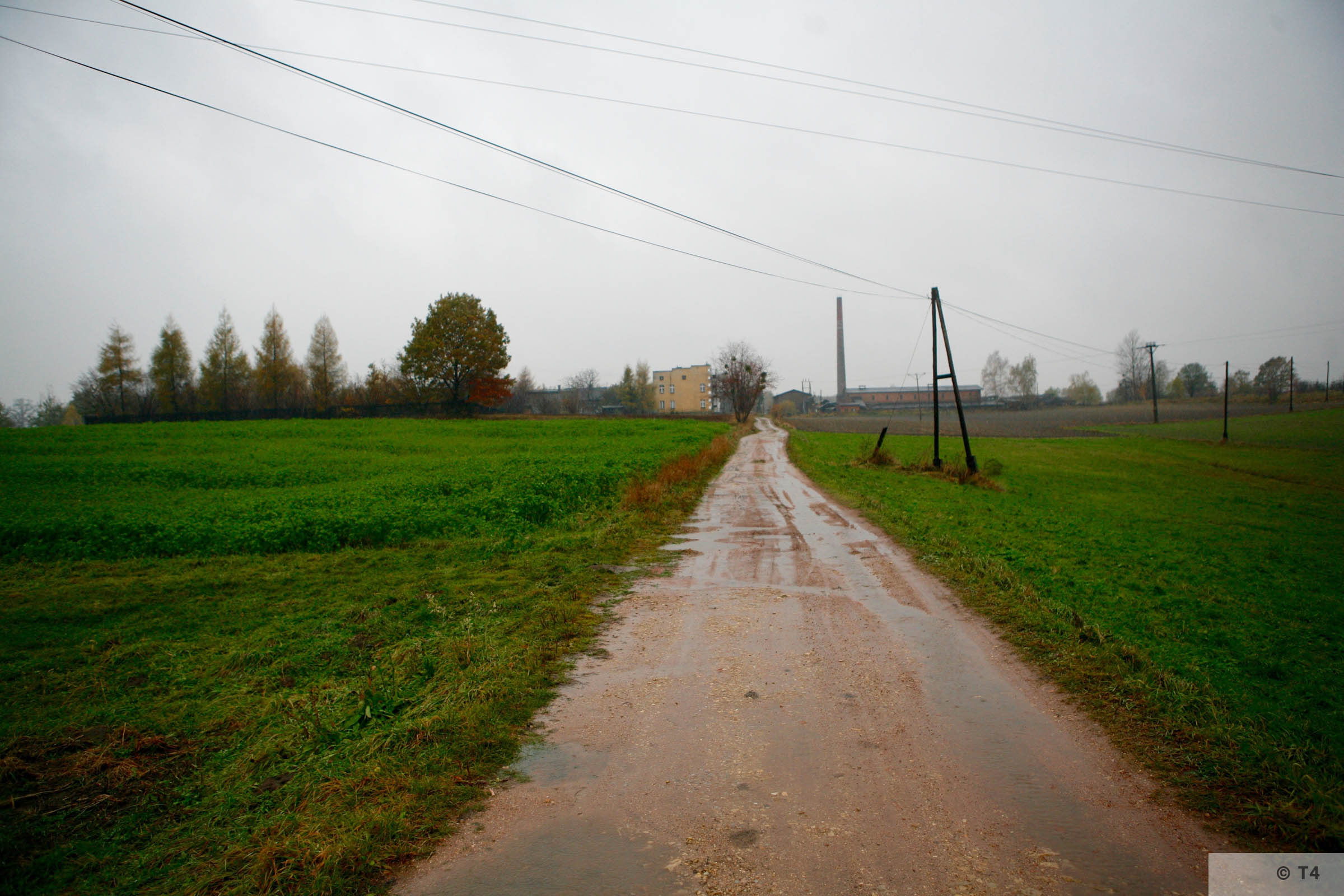 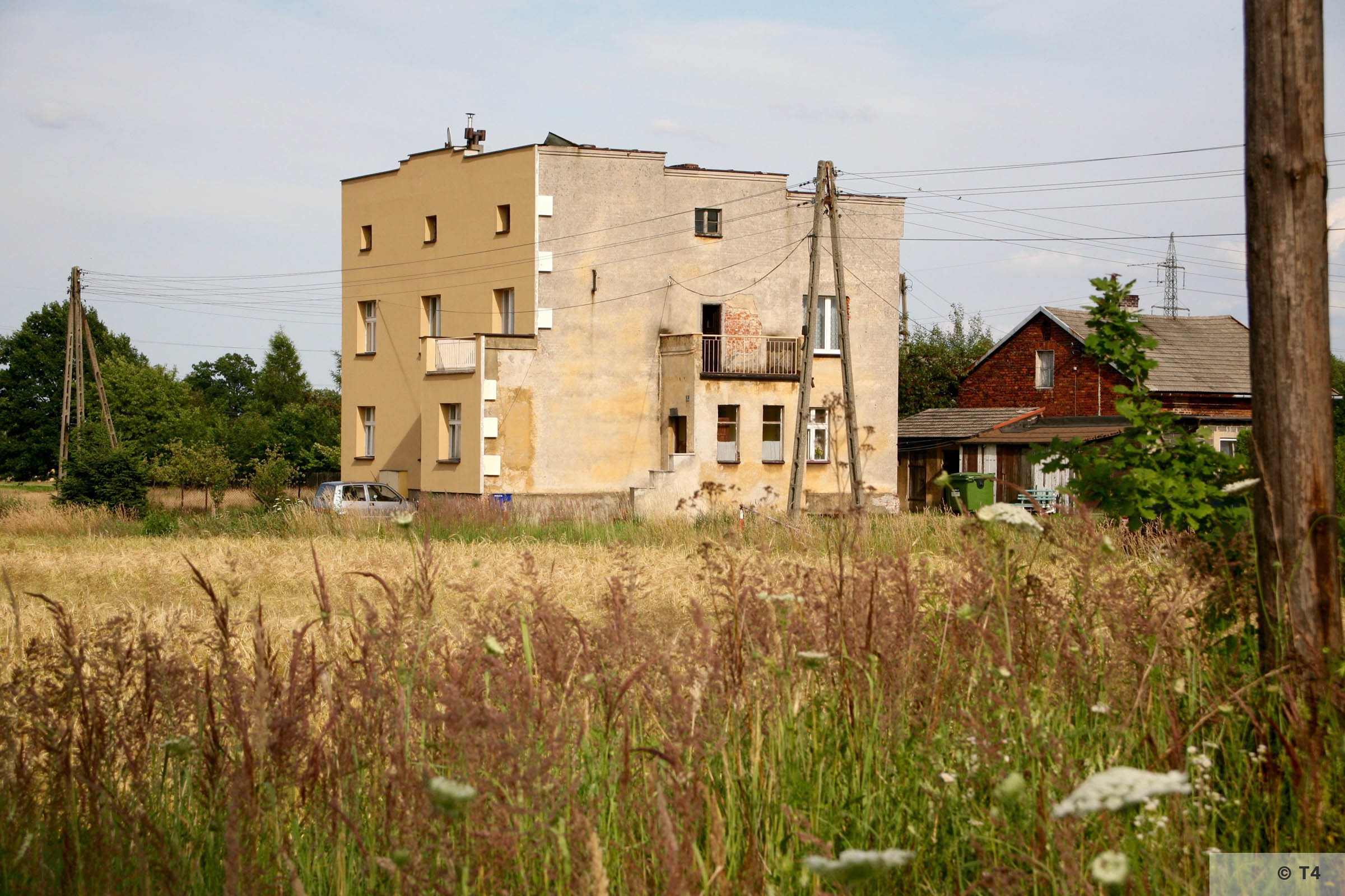 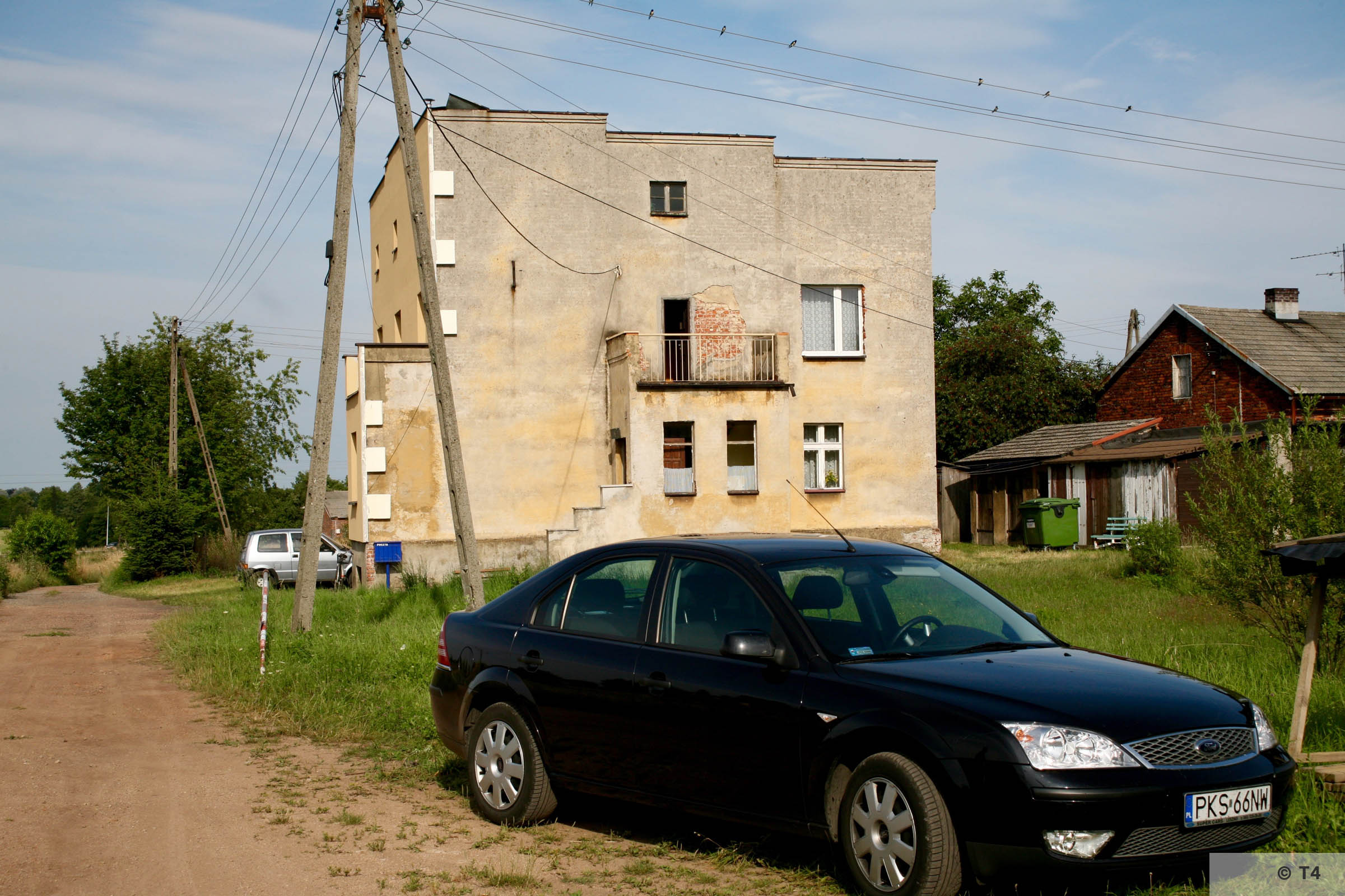 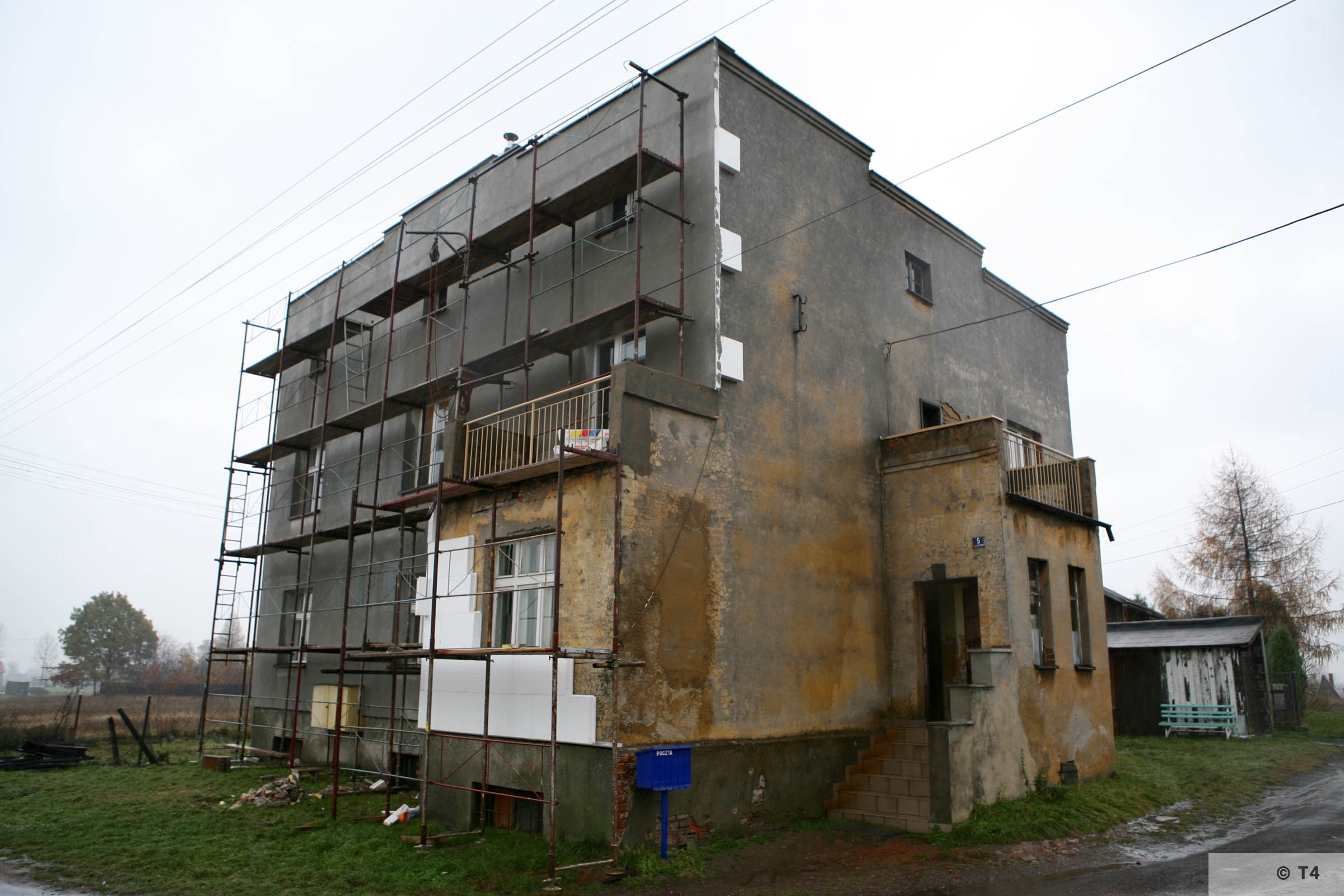 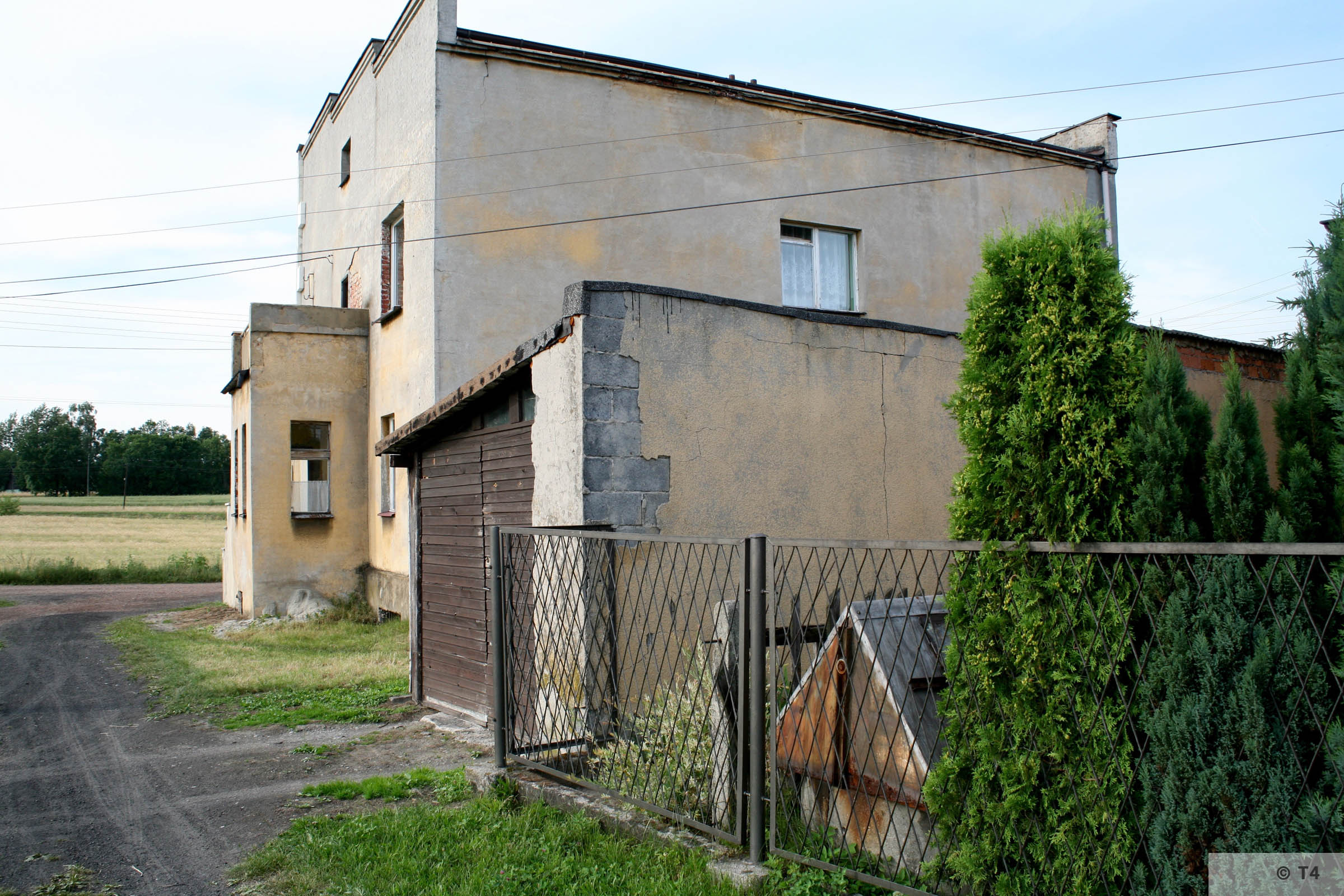 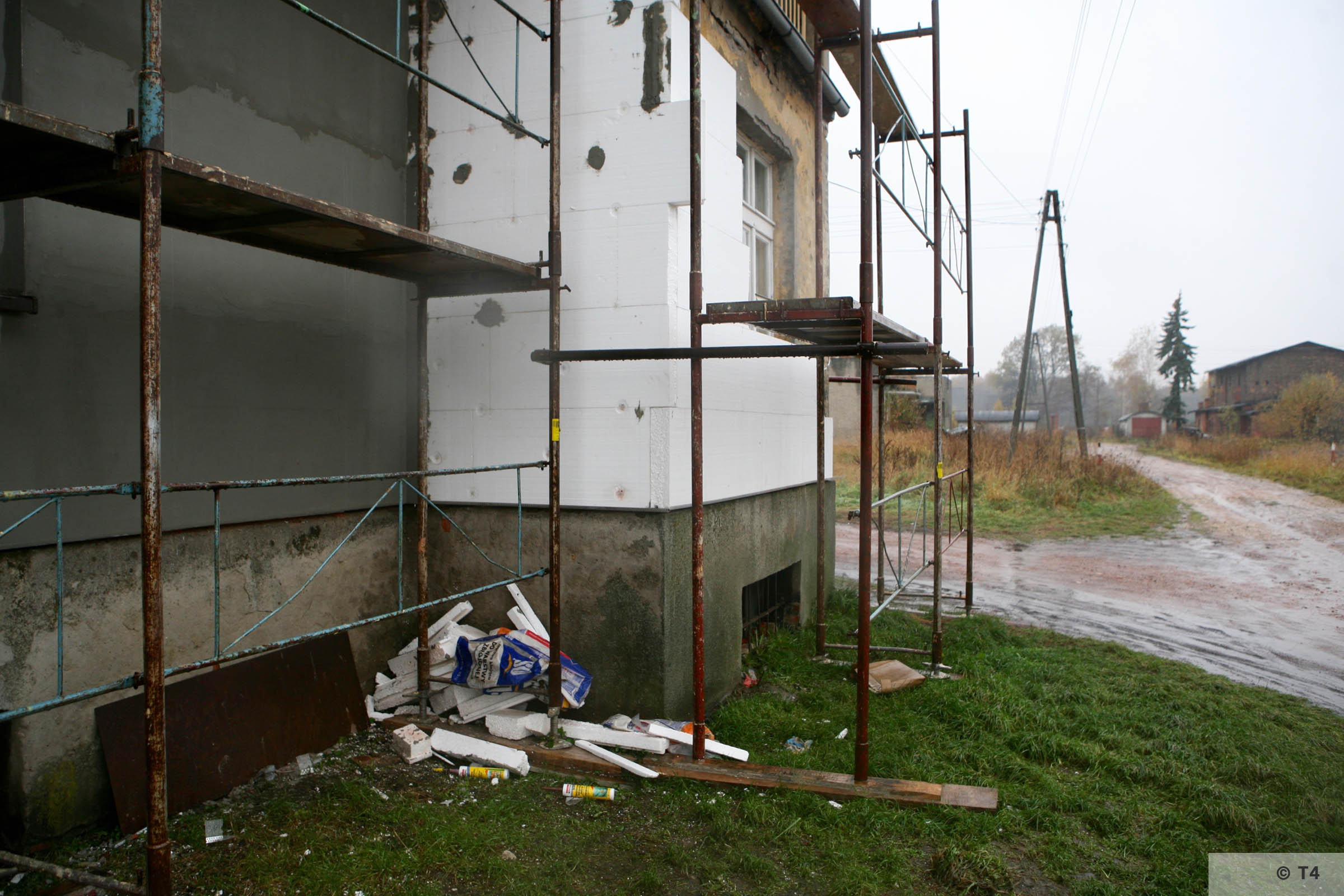 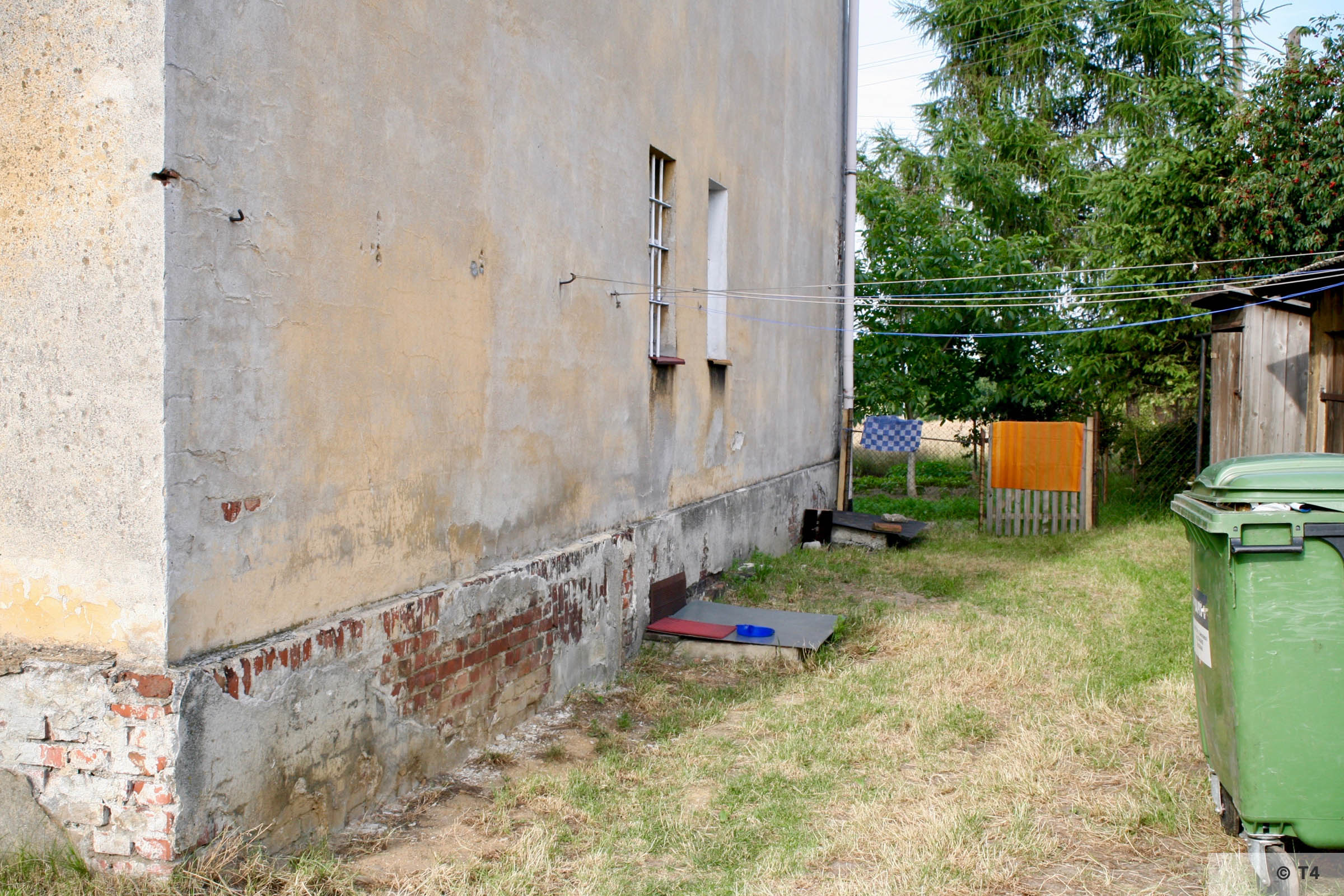 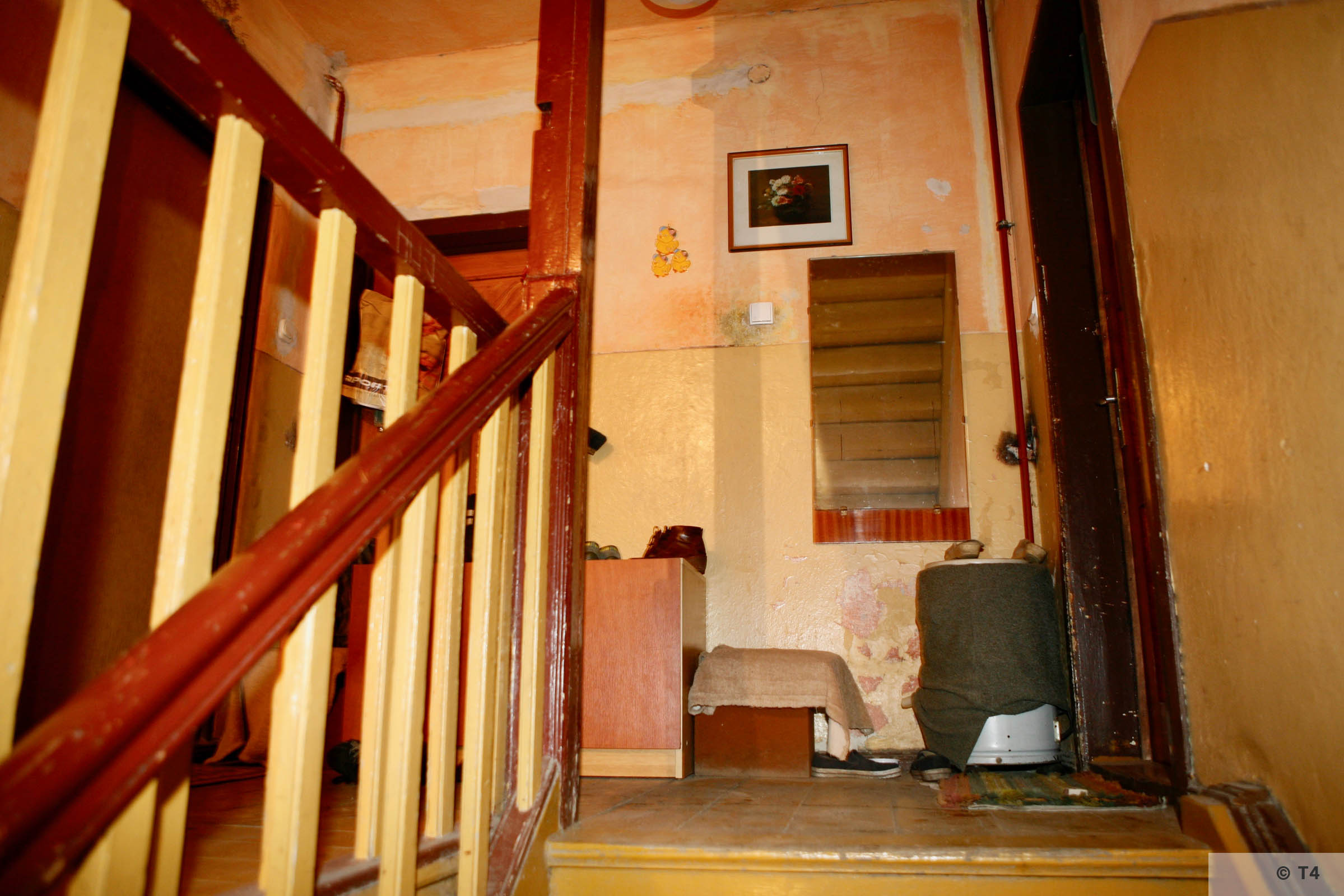 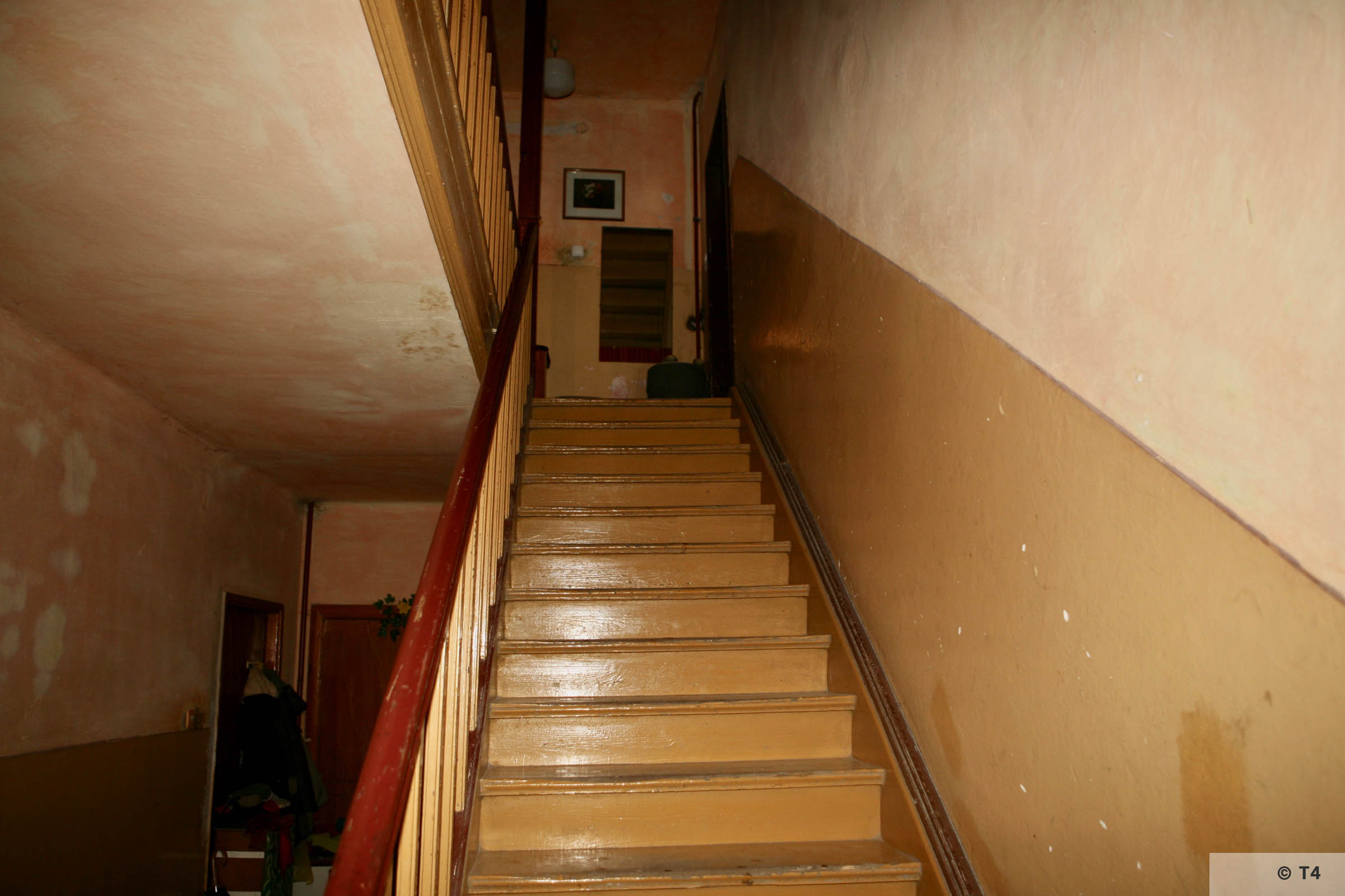 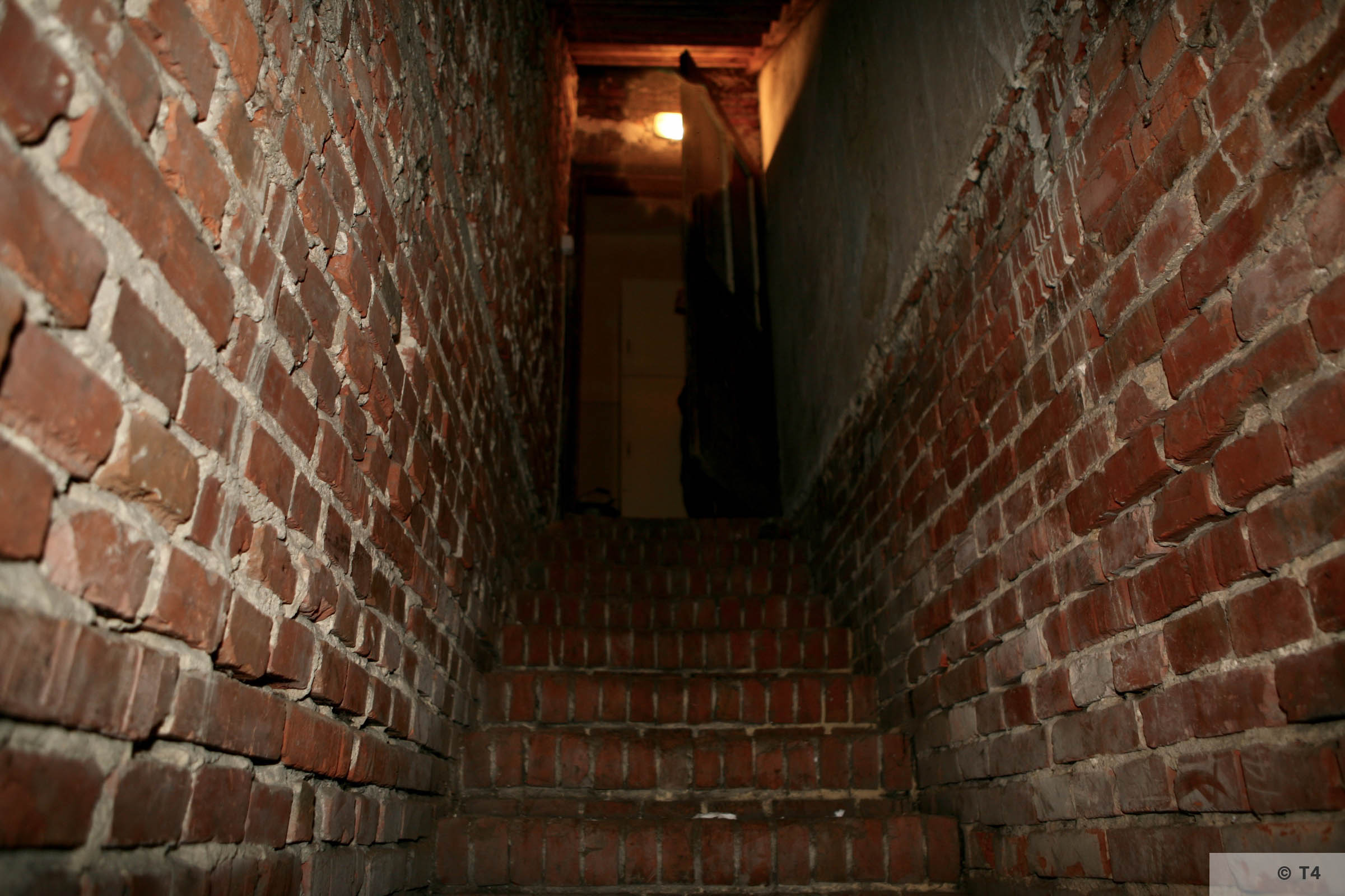 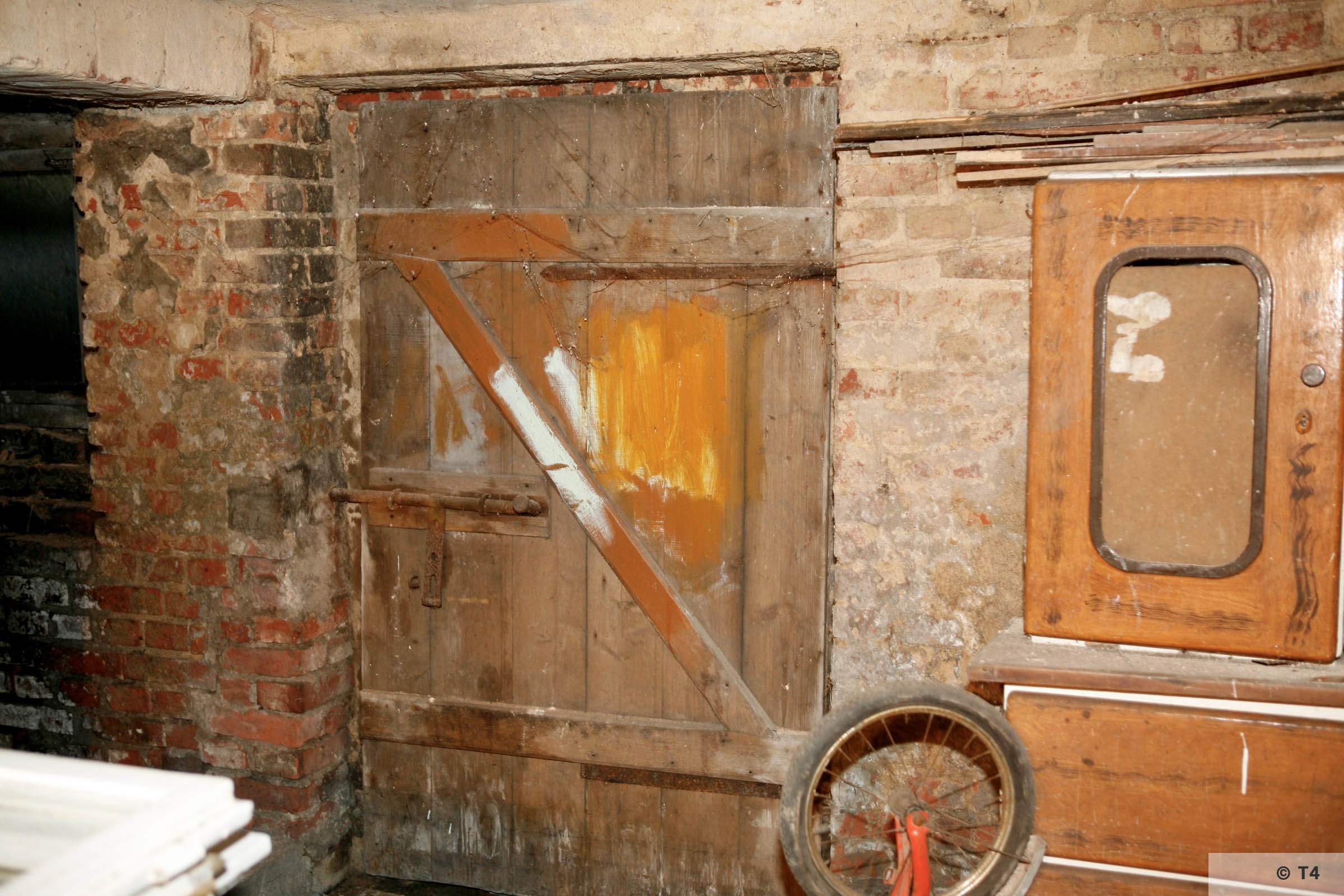 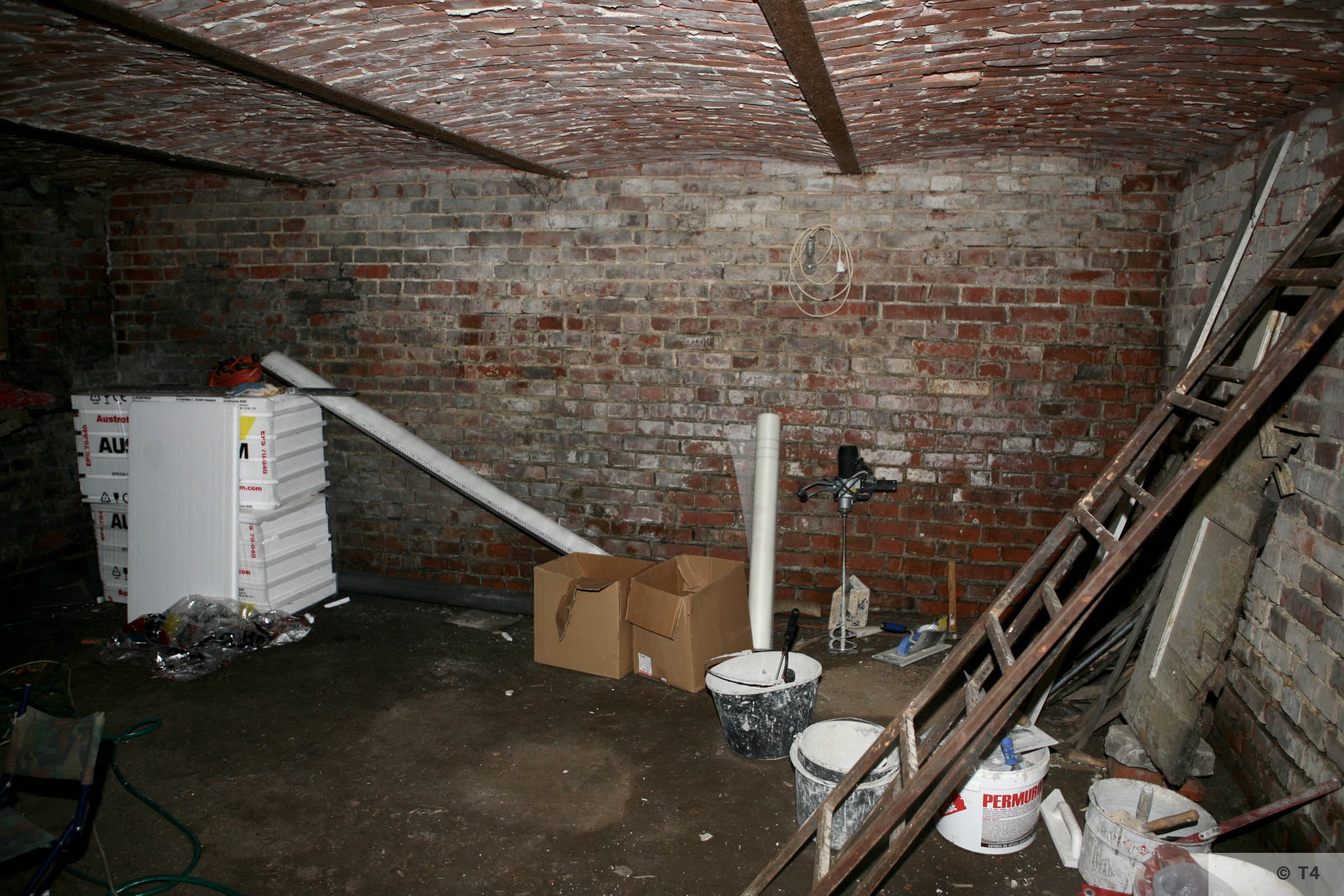 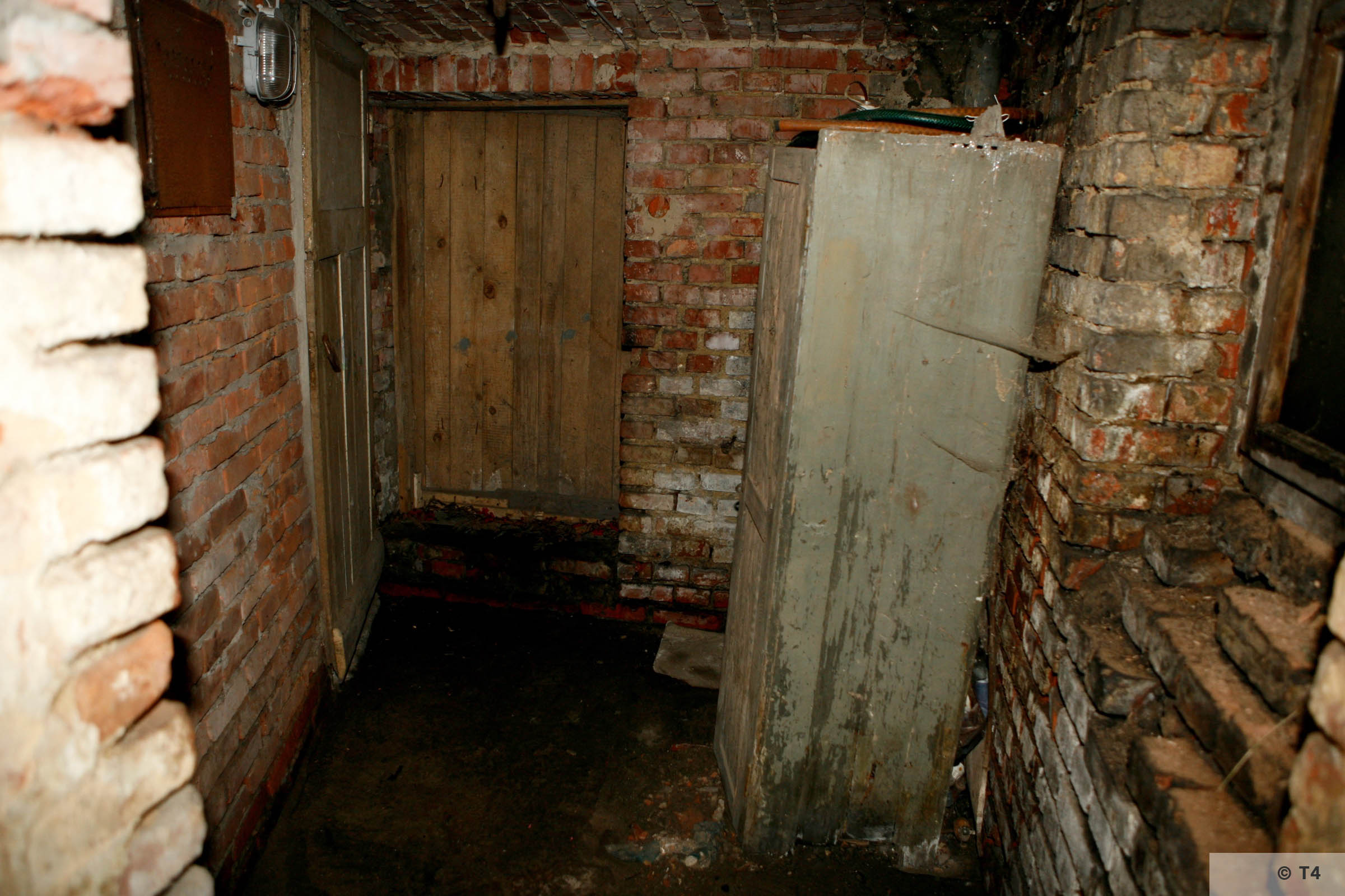 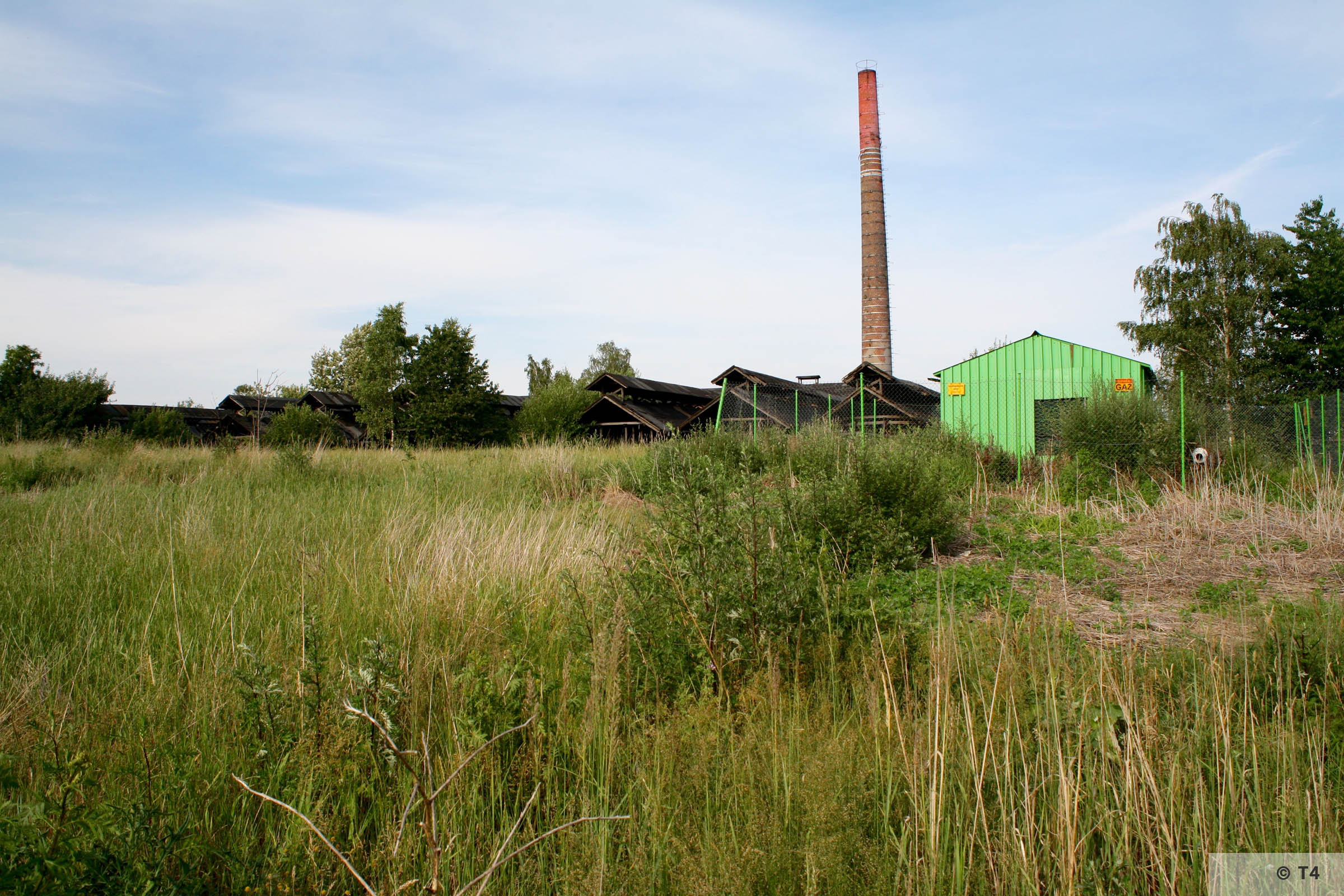 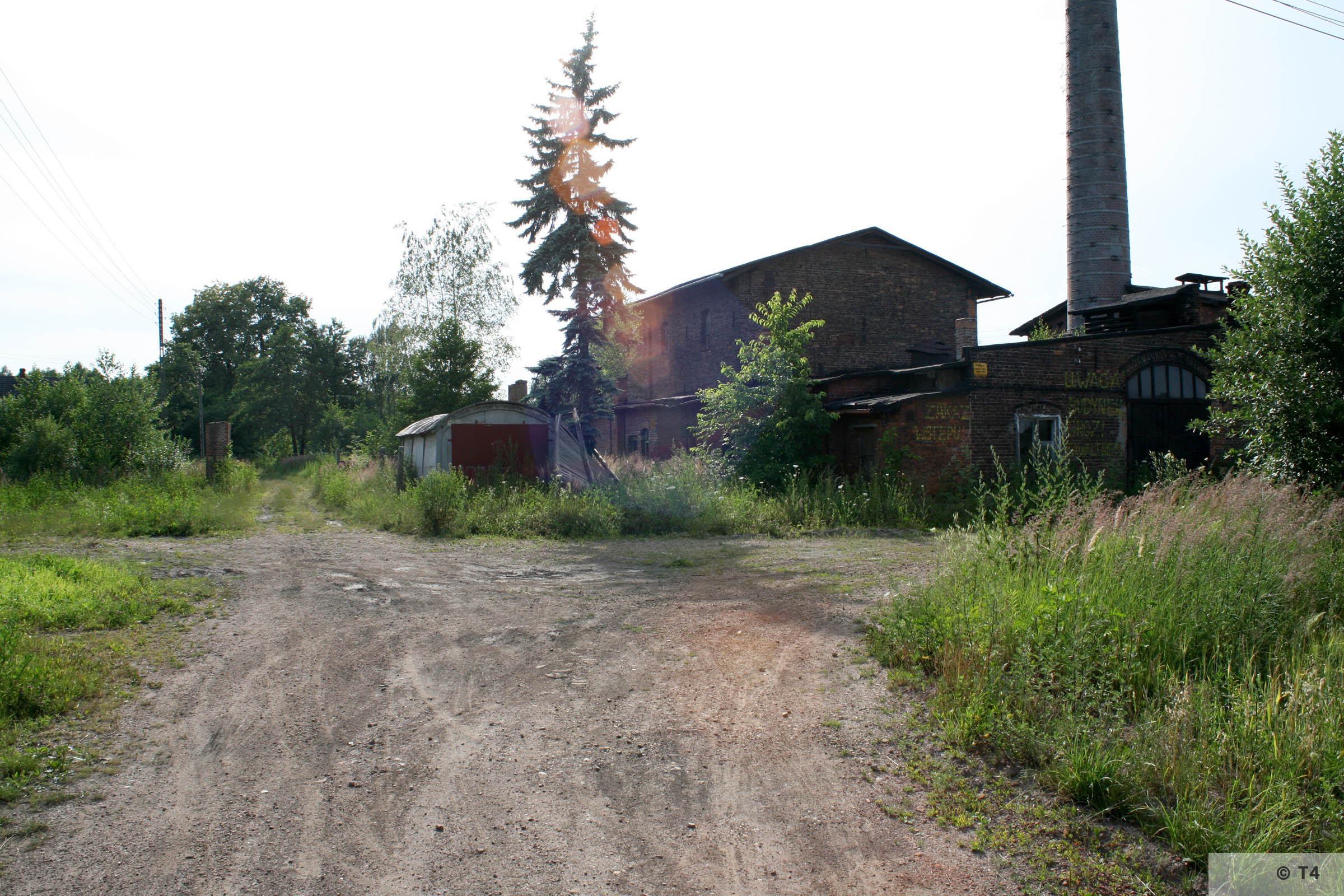 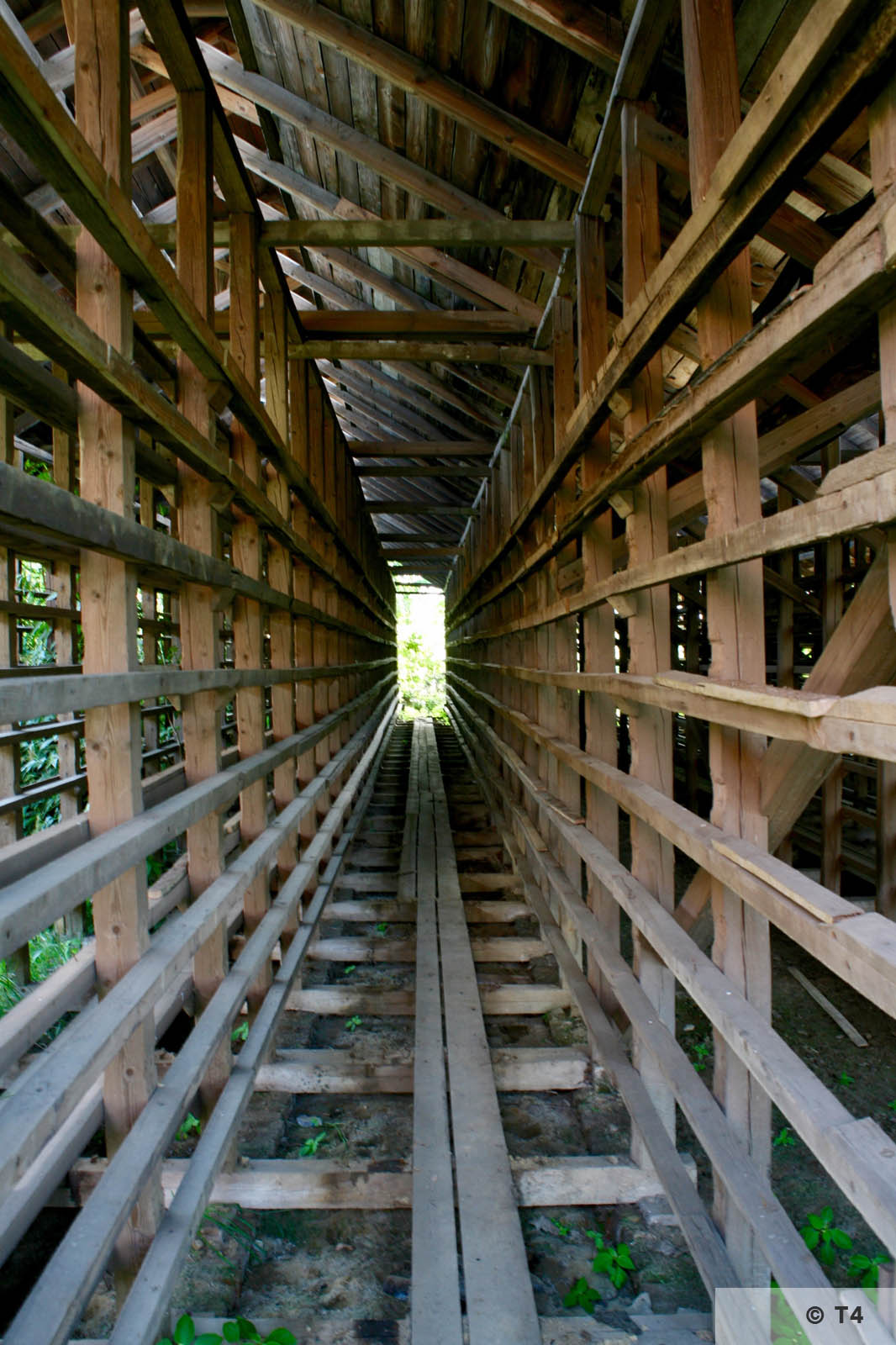 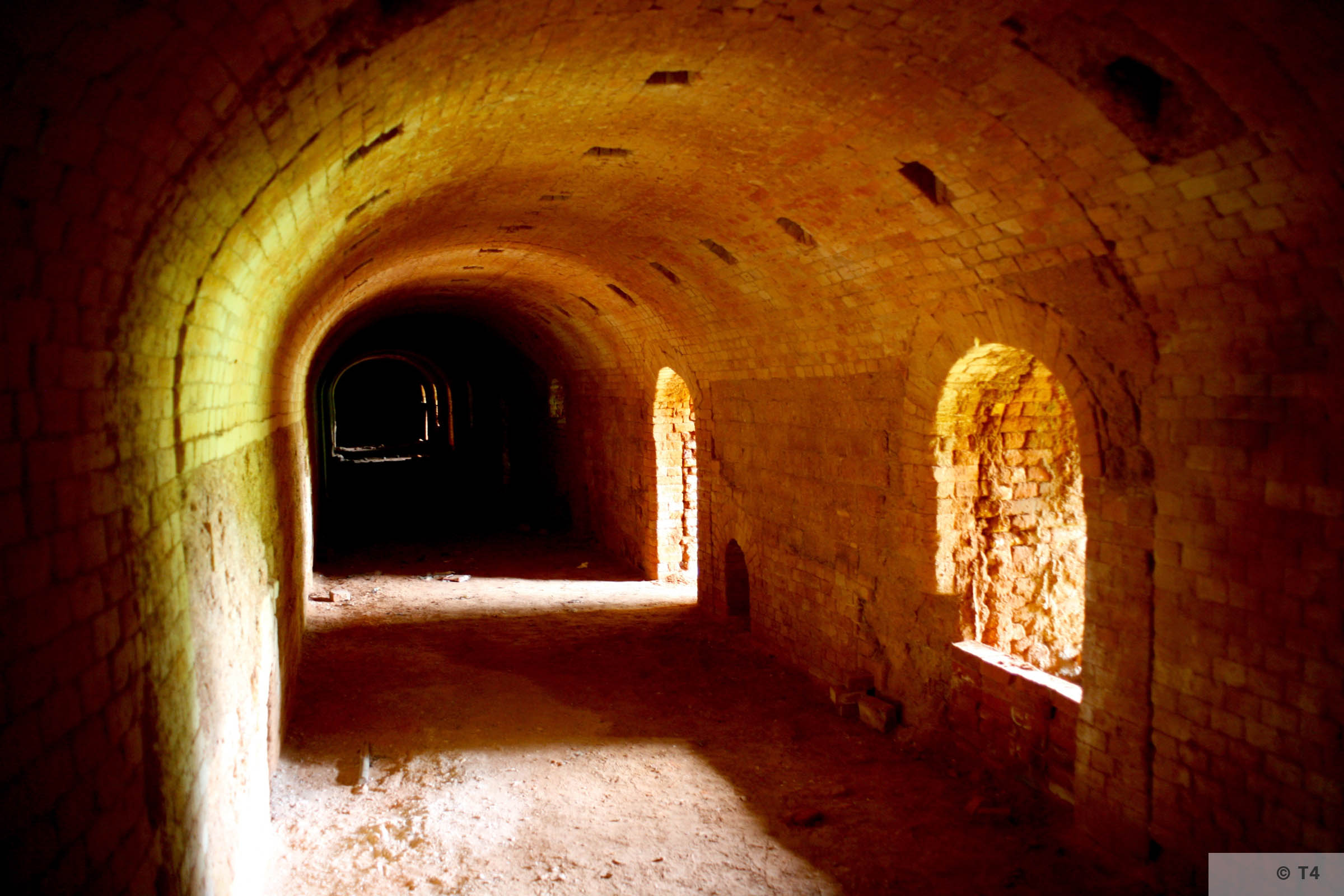