One of the Primary Objectives of the Re-Finding the Sub Camps of Auschwitz Project was to Determine the Status of Memorialisation at the Sites of the Former Sub Camps. 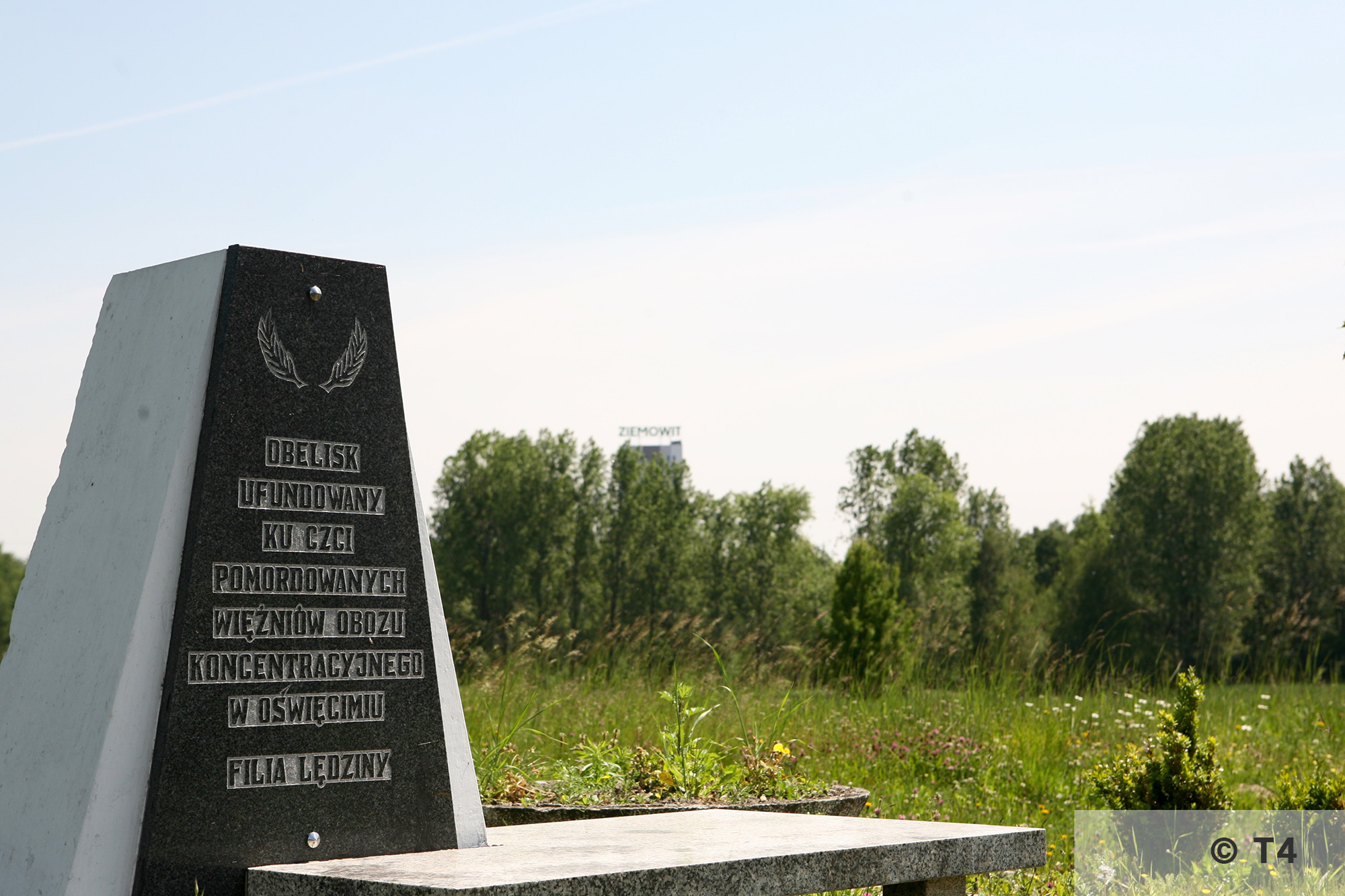 Memorial on the area of the former Lager Heimat of sub camp Günthergrube. The Ziemowit mine where prisoners worked can be seen in the background. 2006 T4 6945

One of the primary aims of the “Re-finding the Sub Camps of Auschwitz” project was to document the extent of the memorialisation of the individual sub camps.

In the cases of Wirtschaftshof Birkenau and Wirtschaftshof Plawy there is no commemoration at the sites of the former sub camps. There is however an information board at the entrance to Auschwitz II-Birkenau erected by the Polish population of the former Interessengebiet in April 2001.

In the cases of Aussenkommando Chelmek, Sonderkommando Kattowitz and Arbeitslager Trzebinia a memorial does exist near the location of the former sub camp but it is not clear whether these are general memorials to the victims of Nazi war crimes and/or for the prisoners of the former sub camp.

Tiergartenstrasse4Association has not visited the sites of the Auschwitz sub camps since 2008. It is possible that the memorialisation status of individual sub camps has changed since then. Wherever possible we have attempted to check any changes in status via the internet.

There currently exists no single exhibition detailing the history of the sub camps of Auschwitz and little information. However, on local initiatives, some small museums and exhibitions have been created.

In October 2006, thanks to the efforts of the local government of Goleszów and the Auschwitz-Birkenau State Museum, a memorial room was opened in Goleszów for the prisoners of the former Arbeitslager Golleschau sub camp. As part of this project, a tourist and educational path was developed, leading from the building of the main directorate of the cement plant in Goleszów to the quarry in which prisoners worked.

In May 2007, a new memorial plaque in Harmęże was unveiled through the efforts of the Society for the Protection of Oświęcim. On this occasion, a brochure devoted to the history of the Harmense sub camp developed by the historian Adam Cyra of the Auschwitz-Birkenau State Museum was published.

In the building of the former primary school, now the Przedszkole Publiczne nr 2 (Public Kindergarten No. 2) there is a small room of remembrance dedicated to the memory of the prisoners from the Wirtschaftshof Budy sub camp and Strafkompanie.

In some of the mines, steel works and heavy industry businesses there are museums dedicated to the history of the businesses. For example, we were lucky enough on our site visit to the former Arbeitslager Gleiwitz II sub camp and Gasrußwerke in March 2007 to be shown around the area by the caretaker of the former Gasrußwerke Gleiwitz. There is a small museum in the main administration building recording in photographs and documents the history of the plant after the Second World War. There are a few documents and short history of the time of the Gleiwitz II sub camp. There are also photographs of the partly destroyed Gasrußwerke after the war.

There are a number of memorials at the burial sites of former prisoners on the death marches west in January 1945, many in local cemeteries. Whilst the Association retraced some of the routes and photographed some of the memorials this work was not completed and the photographs are not presented on this website.

More recently website based memorialisation has become increasingly important. The best example is the website of the Jaworzno Museum which represents the history of the former sub camp Neu-Dachs in some depth through photographs, multimedia and written text.[1]

The Auschwitz-Birkenau State Museum has itself on its own website produced short histories on each Auschwitz sub camp. [2]

The Wollheim Commission of the Goethe University in Frankfurt am Main is dedicated to the research of I.G. Farben and its use of slave labour especially at Monowitz. Its website provides excellent information and essays on the topic. [3]

See all of the Sub Camps of Auschwitz