The Prisoner Death Marches from Auschwitz and the Auschwitz Sub Camps West to the Altreich – January 1945.

Orders to finally dissolve and evacuate the sub camps were issued to the Lagerführer on-or-around the 17th January 1945. The precise details of these orders is unknown but it is likely that they were similar to those issued in other areas and to other camps, “ To the degree that the situation on the front makes it necessary, timely orders must be issued for the complete emptying of the prisons. Should an unforeseen development of the situation make it impossible to transport the prisoners, their liquidation is ordered with the proviso that the bodies of those shot must be removed to the degree possible (burning, dynamiting buildings, etc) In such a situation, the Jews employed in armaments factories or elsewhere must be dealt with in a similar way. Under no circumstances should a situation arise in in which either prisoners or Jews are liberated or fall into enemy hands, regardless of whether this is resistance movement bands or the Red Army.” [4]

Prisoners were formed into columns and marched out of the camps from around the 17th January 1945. Most of the prisoners were marched on foot to collection points in Gliwice and Wodzisław Śląski from where the prisoners were transported by rail to concentration camps in the Altreich: Mittelbau-Dora, Buchenwald, Sachsenhausen, Mauthausen, Flossenbürg, Ravensbrück, Bergen-Belsen.

Other prisoners were marched on foot to Gross-Rosen concentration camp and its sub camps in the Central and Western Sudetenland and also to the concentration camps in the Altreich. The forced marches to Gross-Rosen were the longest death marches (around 275 km) on foot and resulted in the highest number of deaths as the already weakened prisoners succumbed to the harsh winter and lack of food or were shot by SS guards when unable to keep up.

The evacuation of the prisoners from the sub camps did not proceed in a consistent manner. The likely orders received by the Lagerführer of the sub camps were to move the prisoners west to concentration camps in the Altreich; no prisoners were to be left behind or to be allowed to fall into Soviet hands. These orders were not consistently applied and the treatment of prisoners unfit to leave the camp on the death march varied. In some sub camps the ill and sick were killed; in others they were left behind to be liberated by the Red Army; in others the ill and sick were forced onto the death march.

In other sub camps for example Arbeitslager Laurahütte all prisoners sick or otherwise were forced onto the death march. In two of the sub camps in Czechoslovakia, Freudenthal and Lichtewerden the SS guards fled the camps and the prisoners were liberated by the Red Army.

Those unable to keep up with the column on the forced marches were shot by the roadside. On the death march from Leszczyny to Gross-Rosen concentration camp it is estimated that approximately 1,000 of the 2,500 prisoners who set out from the sub camps died or were shot en route. In contrast on the two foot marches from the Auschwitz main camps to Gliwice of around 40,000 prisoners, which included some sub camp prisoners, it is estimated that only a few hundred perished.

Transportation from Gliwice and the Gross-Rosen concentration camp to the concentration camps in the Altreich was by rail in open trucks and cattle trucks. In the harsh winter many prisoners died of hunger and exposure.

The death marches west were described in a report drawn up on February, 1 1945 in Neisse (now Nysa) by Procurator General Haffner for Reich Justice Minister Otto Thierack: “The evolution of the situation in Upper Silesia is apparent in today´s joint report, to which I refer. Rapidly developing events cannot fail to influence the transport of prisoners. The planned marching routes are partially unusable because the streets are blocked or within the range of enemy activity. The blocking of the streets results from the partial evacuation of 1,500,000 civilians from the endangered areas in marching columns. Unforeseen motor vehicle columns are travelling in a westward and south-westward direction on the few main roads. In addition, there are withdrawing columns of Wehrmacht and Police. Yet almost 50,000 male and female Auschwitz concentration camp prisoners and thousands of English and Soviet POWs are being sent along these same roads. I have been informed that, of columns numbering 3,000 POWs, 1,000 arrive at the destination. In the complete confusion that prevails on the roads, which is made worse by enemy air attacks, I regard this as completely possible. There are no words to describe the scenes occurring before our eyes. The road is strewn with the countless bodies of the dead, fallen horses, and overturned vehicles. The situation became greatly exacerbated from January 20 to 23. Namely, according to information from the head of Security Police, things reached the inconceivable point where 8,000 to 9,000 concentration camp prisoners could not be transported and were left without supervision.”[5]

Upon reaching the concentration camps in the west many prisoners were assigned to their sub camps. Many prisoners were moved around three or more Stammlager and sub camps as the front closed in from the east and west. Already weakened by more than a month on the road and the privations of the concentration camps many prisoners succumbed. Surviving prisoners were marched to the north coast of Germany, or to the south to Dachau, Flossenbürg and their sub camps. Others ended up in Bergen-Belsen concentration camp where thousands died in the last weeks before liberation by the British army. Other prisoners ended up in Neustadt in Schleswig on the prison ship SS Cap Arcona moored in the Bay of Lübeck in April 1945. The Cap Arcona was sunk by the British Air Force on 3 May 1945 and most prisoners did not survive.

We present on this website a list and maps of the main death march routes of prisoners from Auschwitz and its sub camps. On the Survivors section we also present a table of Jewish survivors from the Warthegau and trace their deployment in the Warthegau labour camps through to their transfer to Auschwitz and its sub camps and finally the death marches west to the concentration camps in Germany and liberation for the lucky few.

[4] Strzelecki, Andrzej, The Evacuation, Liquidation and Liberation of Auschwitz, [in:] Voices of Memory 1, Auschwitz-Birkenau State Museum 2008, p. 57. Decree of July 20, 1944 from the commander of the pólice and security service of the General Government on the evacuation and liquidation of prisons and compulsory labour camps for Jews.

Our research so far has concentrated on the Jews of the Warthegau. This is but one category of prisoners who were sent to the Auschwitz sub camps. Other categories of prisoners included:

We would like to extend the research to all the survivors of the Auschwitz sub camps based on the records of the International Tracing Service (ITS) now called Arolsen archives in Bad Arolsen in Germany and other sources. 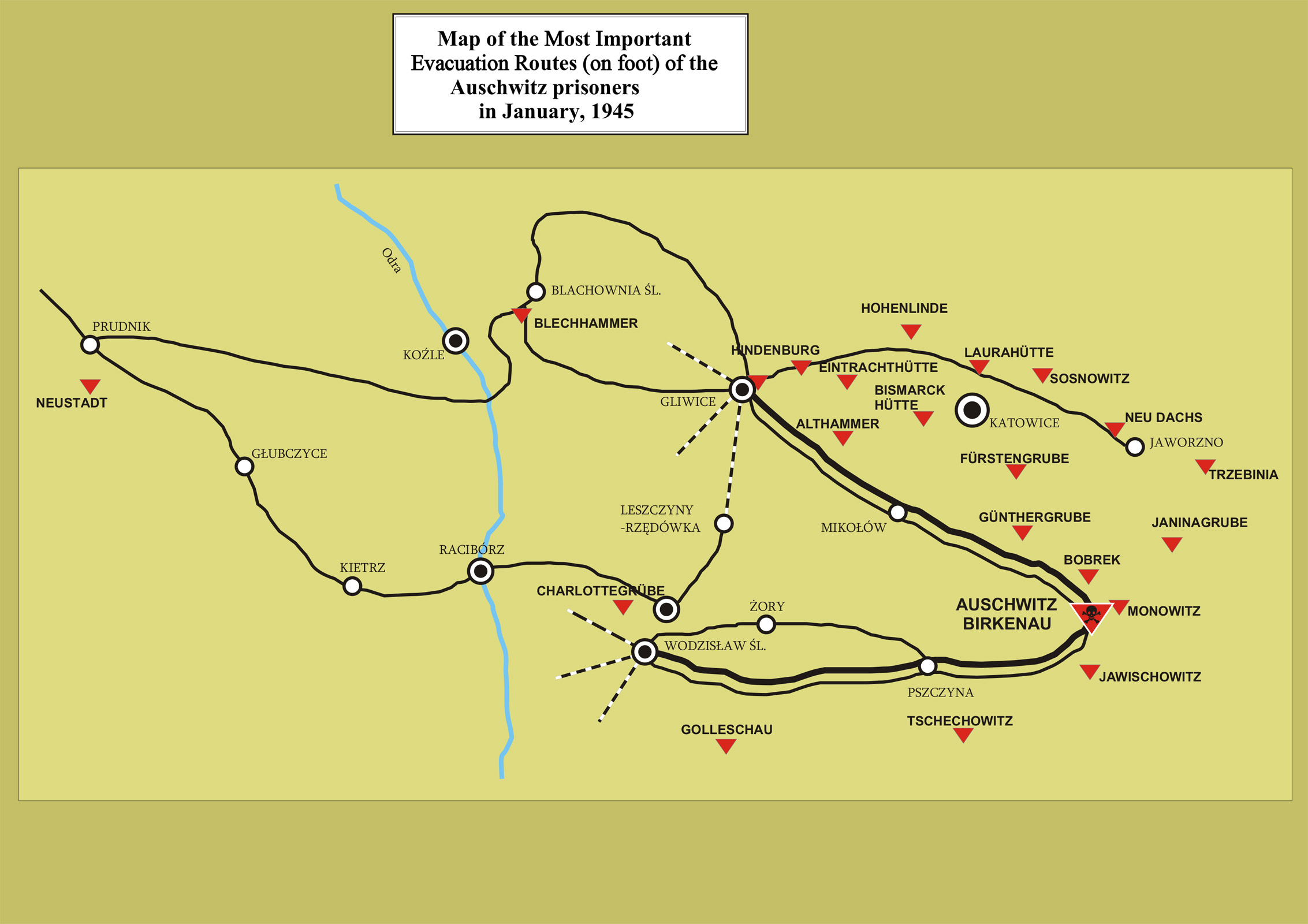 Most important evacuation routes of prisoners from Auschwitz in January 1945.

Map of death march from Auschwitz to Wodzisław Śląski passing through Żory.

Map of death march from Auschwitz to Wodzisław Śląski passing through Jastrzębie Zdrój.