The Individual Histories of the Auschwitz Sub Camps in Text, Photographs, Maps and Documents. 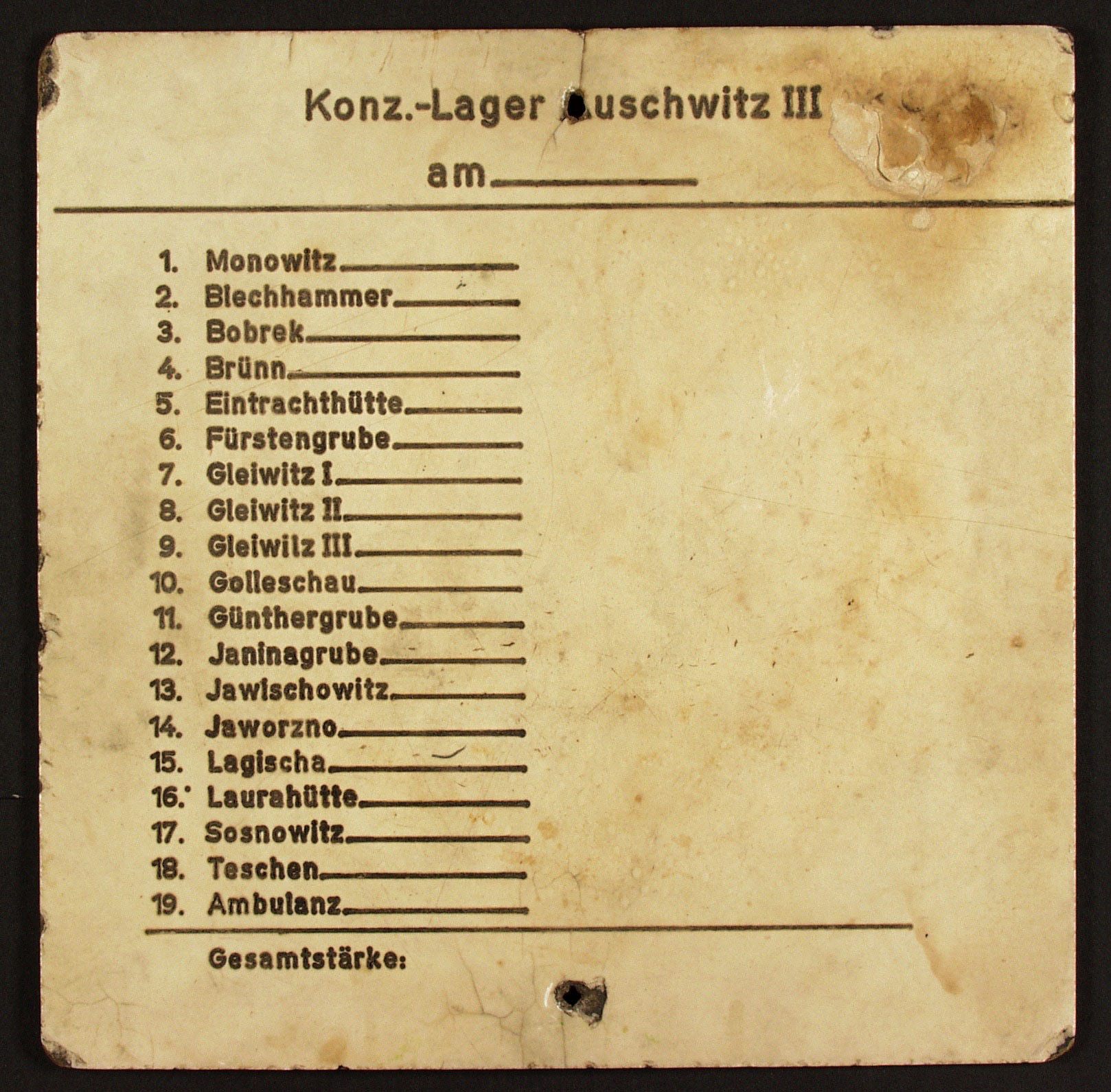 A prisoner number count form for the sub camps of Auschwitz III-Monowitz. PMO-II-4-266

The Individual Histories of the Auschwitz Sub Camps

In this section Tiergartenstrasse4Association present the individual textual, topographic, photographic and documentary histories of the 45 sub camps of Auschwitz. The textual history of each sub camp is organised as:

The over 3,500 individual photographs and documents related to the Auschwitz sub camps are organised by individual sub camp as follows:

The individual sub camps and their histories, photographs, topography and documentation can be accessed directly from the interactive Google Map and listing of all 45 sub camps below or from the section – The Auschwitz Sub Camps and their Classification by Industry Type of the Company or Entity that Employed the Prisoners or from the Companies and Prisoner Labour Section.

What is a Sub Camp?

Virtually all of the Stammlager (main concentration camps) had three types of Arbeitskommandos (Work Kommandos):

A sub camp could be described as, or referred to as, a subsidiary or branch camp (Aussenlager, Zweiglager or Nebenlager) or simply a labour camp (Arbeitslager) but it could also be described as an Aussenkommando (External Kommando) or Sonderkommando (Special Kommando). Such a multitude of concepts and names used in the original German nomenclature sometimes creates confusion in the interpretation of the concept of a sub camp. Use of the terms Aussenlager, Zweiglager, or Nebenlager could suggest a different degree of organizational structure and subordination of the affiliate camp to the main camp. However, as the former commandant of Auschwitz, Rudolf Höss testified on this subject: “these terms are not associated with any separate organizational structure of the given sub camp, they were all synonymous and used at the same time.” 1

The editors of the Zeszyty Oświęcimskie journals also faced this definitional problem, when they sought for the first time to write the histories of the sub camps and Aussenkommandos of Auschwitz concentration camp beginning in the 1950s and 1960s. How should a sub camp be defined? The definition of a sub camp adopted by the editors of Zeszyty Oświęcimskie was set out in the introduction to the series, “It should be understood as being a work kommando or group of work kommandos living in a separated and fenced off area (using walls or barbed wire), and living in barracks located in the area.” 2

Although in official camp documentation some sub camps were described as Aussenkommandos, these sub camps differed from the larger sub camps of Auschwitz only by their lesser degree of organization, fewer prisoners and length of operation of the sub camp. Small sub camps described as Aussenkommandos without extensive camp structure were created to perform specific tasks. The prisoners were placed in adapted rooms of existing buildings for this purpose and little sub camp infrastructure was needed or built. After the works were finished, the Kommando was dissolved and the remaining prisoners were transferred back to the main camp.

Individual sub camps could also have a number of seperate Kommandos and Aussenkommandos that performed different tasks in the sub camp and outside of the sub camp for external employers. In many cases the primary employer of prisoners from a sub camp seconded some or all of their allocated prisoners to independent companies they had sub contracted work to, for example building companies.

So the complete definition of a sub camp should be: work Kommando(s) from the Stammlager where the prisoners were housed at or near their place of work and in addition, the camp (s) came under the authority of a single Lagerführer.

In Budy, there were three camps: Wirtschaftshof Budy Männerlager, Wirtschaftshof Budy Frauenlager and the Strafkompanie. The Strafkompanie was set up by SS-Oberaufseherin Maria Mandl as a punishment camp for female prisoners. The prisoners were subject to harsher conditions than prisoners in the sub camps however the prisoners also performed agricultural work in Budy. For the purposes of this study these camps are treated as a single sub camp, even though we have separated them for the purposes of their textual histories.

In Rydułtowy there were up to 5 separate camps housing Auschwitz prisoners. These are treated as one sub camp, Arbeitslager Charlottegrube, as there is no evidence they came under the authority of separate Lagerführer.

The head of each sub camp was the Lagerführer, who, depending on the size of the camp, could also be the commander of the guard unit stationed in the sub camp (the Postenführer or Kompanieführer), while the Kommandoführer was the head of a Kommando or Aussenkommando. If the sub camp was small, the functions of the camp commander and the guard commander were combined. If the sub camp was larger, with thousands of prisoners, then its organizational structure was much more sophisticated. The Lagerführer of the sub camp could have deputies, report officers (Rapportführer), block officers (Blockführer), supervisors of working Kommandos (Kommandoführer), a head of employment (Arbeitsdienstführer), a head of a separate political department, a head of the censorship office, and even separate SS managers of the prisoner kitchen and hospital.

The employment of SS overseers so called SS-Aufseherinnen is a separate definitional problem in the camps and sub camps. In the case of sub camps for women, the post of SS-Oberaufseherin was created, who were the heads of the other female SS-Aufseherinnen in the camp. The sub camp would also have an overall male SS Lagerführer. No military ranks were introduced for the SS-Aufseherinnen, but a functional hierarchy existed. Due to the guiding principle that women in SS service could not give orders to SS men, conflicts of competence often arose between the SS-Oberaufseherin and ranking SS men.3

Virtually all of the Nazi concentration camps defined as Stammlager, which reported directly to the head of the Inspektion der Konzentrationslager, Amt D in the SS-Wirtschafts-Verwaltungshauptamt (WVHA),  had their own complex of sub camps.

The Nomenclature of the Auschwitz Sub Camps

Given the lack of separate legal identity of the Stammlager perhaps it is not surprising that the nomenclature of the sub camps is inconsistent.

The SS Kommandos sometimes took the prefix Aussenkommando. Others only used a name.

However, there was some method to the prefix description and the naming of the sub camps.

The prefix description assigned to the agricultural sub camps was Wirtschaftshof (farm).  The exception was Harmense where the prefix Geflügelfarm (poultry farm) was applied. The prefix assigned to most of the sub camps where prisoners worked for industrial entities was Arbeitslager (labour camp).  It may be that all such camps were prefixed Arbeitslager but this has not yet been verified.

When it came to the sub camps where prisoners worked for companies or entities involved in oil and chemicals, coal mining, steel works and power plants, sometimes the camp was named for the German name for the mine, steelworks or factory in which the prisoners worked. For example, Arbeitslager Laurahütte in Siemianowice Śląskie, was named after the Laurahütte steel plant in which the prisoners worked. In other cases where the prisoners of the sub camps worked at a number of different locations in the locality, the camp was named for the German name of the town or locality as in the case of Neu-Dachs in Jaworzno. Prisoners from the Neu-Dachs sub camp worked at coal mining in the mines of Dachsgrube, Rudolfgrube and Richardgrube and in the construction of the Kraftwerk Wilhelm and expansion of the Kraftwerk Friedrich-August power plants.

The four Auschwitz sub camps in Gliwice were not named for the businesses for which the prisoners worked but simply named: Arbeitslager Gleiwitz I, Gleiwitz II, Gleiwitz III and Gleiwitz IV.

The four forest sub camps of Auschwitz were named for the German locality in which the prisoners were accommodated. We have so far only confirmed that one forest camp was definately prefixed with Aussenkommando, Kobior. Again it may be that in reality all four were prefixed Aussenkommando.

The SS and other Kommandos were generally named for the German place name of the town or locality in which the prisoners were accommodated.

Two Kommandos of Auschwitz prisoners were specifically allocated to bomb disposal and/ or bomb damage clearance: Tschechowitz – Bombensucherkommando in Czechowice-Dziedzice, and the 2 SS Bauzug. The prefixing and naming of these Kommandos describes literally what they are.

In Sosnowiec, there were two separate camps, in two different locations, performing different tasks and with separate Lagerführer which are referenced as Sosnowitz I and Sosnowitz II. Auschwitz did not differentiate in naming terms between these two camps. The nomenclature was proposed by the Polish Historian Dr. Franciszek Piper from the Auschwitz-Birkenau State Museum while working on the history of the sub camps in Sosnowiec to differentiate the two camps. The designations Sosnowitz I and Sosnowitz II have now been accepted in the professional literature.1

To date 45 Auschwitz sub camps have been identified. The sub camps of Auschwitz have been classified by the industry type of the company or entity which employed the prisoners or otherwise by type of work performed by the prisoners, where there is no specific industry:

Locations of the Sub Camps of Auschwitz