SS Kommandos: Reclamation of camp infrastructure from former POW camp for Poles for use in building Auschwitz I.

Use of an existing bunker at the site of the former POW camp for Polish prisoners.

The History of the Former POW Camp for Poles in Sośnica

The former Polish POW and army camp was located in Sośnica near the mine of Sośnica.

The area is now a field.

The establishment of the first sub camp of Auschwitz, Aussenkommando Sosnitz was inextricably linked with the initial construction of the Auschwitz concentration camp itself.

In the second half of April 1940, the Inspector of Concentration Camps, Richard Glücks dispatched a committee, headed by Rudolf Höss from the Sachsenhausen concentration camp to Oświęcim to check the viability of setting up a transit camp there. Höss was accompanied by Dr. Kirchert an expert in sanitation and SS-Untersturmführer Seidler an expert in construction. After a two-day visit checking the condition of a former Polish army barracks, they concluded that not only was a transit camp feasible (as originally planned), but even a regular concentration camp. The report set out the required changes to turn the existing camp into a concentration camp, including first the installation of water and sewage facilities. [1]

After returning to Oranienburg, Höss presented his report to the Inspector of Concentration Camps who sent it to the office of Himmler. At the end of April 1940 Himmler ordered Glücks to immediately set up a concentration camp in Oświęcim with a capacity for about 10,000 prisoners. Glücks appointed Höss as the camp commander. On 1 May 1940, Höss went back to Oświęcim, along with several SS men, to begin preparations for the opening of the camp. [2]

Relatively little is known about the early days of the organization of the Auschwitz concentration camp. Certainly, Höss was absorbed with administrative duties associated with sourcing materials and equipment and preparation for the quarters of the first prisoners. He attempted to acquire building materials and barbed wire fencing for the proposed concentration camp. [3]

In his memoirs, Höss says of this initial period: “In Berlin there were problems with conflicts of jurisdiction to enable the expansion of Auschwitz, because under the law, all property belonged to the Wehrmacht, and could only be used by the SS for the duration of the war. The RSHA (Reichssicherheitshauptamt, Reich Main Security Office), the Commander of the Police and Security in Krakow, and the Inspector of the Security Police and SD in Breslau were constantly asking when they could send larger contingents of prisoners, while I did not know where I could get 100 meters of barbed wire from. In Gleiwitz, there were heaps of wire in Wehrmacht stock. But I could not get anything from there, since first I had to get the permission of the Wehrmacht in Berlin. The Inspectorate of Concentration Camps, could not be induced to intervene. So, I was forced to steal the quantity of barbed wire that was needed most urgently.” [4]

In order to maintain minimum security arrangements to prevent escapes, Höss needed to build an electrified barbed wire fence hung at an appropriate height and guard towers around the new Auschwitz concentration camp. This was the main priority for Höss in this initial period of the organization of the camp. [5]

Having problems sourcing the material needed to build the fence around the barracks and general construction of the Auschwitz camp, Höss indicates in his memoirs that this was the reason for the first transport of 728 prisoners to Auschwitz who arrived at the camp from Tarnów prison.[6] Previously, a number of German prisoners had been brought from Sachsenhausen concentration camp to act as Kapos. They were housed in one of the buildings of the former Polish Tobacco Monopoly in several rooms on each floor located in the so called Stabsgebäude. In other areas of the building were organized a makeshift infirmary and administrative offices.

At this time in Sośnica near Gliwice an Aussenkommando, was set up to dismantle the fences of the former Polish prisoner of war camp and transport them back to Oświęcim. One of the members of the Kommando, Arthur Rablin survived to give testimony: “After the Wiejowski escape, a few days later, around 10 July 1940 one of the first Aussenkommandos was organised which was employed in the demolition of the former camp of Polish prisoners in Sośnica near Gliwice. The Kommando had about 30 prisoners and its leader was SS-Oberscharführer Franz Hössler. The function of Kapo was held by prisoner No. 10, a man named Galas, called by the prisoners Miki. Our group stayed there permanently. We lived in a flooded bunker. Of this group, I remember one prisoner No. 1023 Skawiński (…). In Sosnica we worked almost a whole month (…). In Sosnica we removed the barbed wire fence, which was quite large. This wire was then used for the fence at Auschwitz concentration camp.” [7]

The former Polish POW and army camp was located in Sośnica near the mine. Scant information remains on the Aussenkommando Sosnitz and we were unable to determine all the relevant facts related to the sub camp. What is known, is that the prisoners of the Aussenkommando removed the barbed wire fencing of the former Polish POW camp and transported it to the Auschwitz concentration camp. The Aussenkommando in Sośnica was closed in early August 1940 after completion of it´s tasks gathering and transporting the necessary materials to Oświęcim. The prisoners were then returned to the Auschwitz concentration camp. In Auschwitz, a separate detachment of prisoners straightened the barbed wire fencing and wound it onto wooden spools to be used for the camp fence at Auschwitz concentration camp. [8]

[5] Setkiewicz, Piotr (Auschwitz-Birkenau State Museum) rightly suggests in his article “Ogrodzenie i system izolacji obozu oraz zabezpieczeń przed ucieczkami więźniów w KL Auschwitz” (Architektura zbrodni. System zabezpieczenia i izolacji obozu Auschwitz, Oświęcim 2008), that Rudolf Höss, who before moving to Auschwitz was the Schutzhaftllagerführer in the camp of Sachsenhausen adopted solutions for the fences that he was familiar with from his time in Sachsenhausen.

Little is known about the SS guards from the sub camp Aussenkommando Sosnitz other than the fact the Lagerführer was Franz Hössler. He was born in 1906 in Oberdorf, a photographer by profession. He was a member of the NSDAP and SS from 1933. His service in the concentration camps began in Dachau. In June 1940 he was transferred to the newly established Auschwitz concentration camp. Hössler through assiduous service, was promoted through the hierarchy of the camp leadership to become in July 1943, the Schutzhaftlagerführer of the women’s camp at Birkenau. He terrorised the prisoners, and constantly mistreated them. He also took part in executions, at the notorious Black Wall at Block 11. In addition, Hössler was the specialist in the cremation of the bodies of victims of the camp, until they built the crematoria at Auschwitz-Birkenau. He led the task to exhume the bodies at Auschwitz-Birkenau in 1942 and 1943, burning them on specially prepared pyres, the so called Sonderkommando 1005. For this purpose, he had visited the Kulmhof death camp in September 1942 to view the cremation techniques developed there by the leader of Sonderkommando 1005 Paul Blobel.

Due to the small number of testimonies regarding the Sosnitz sub camp it was difficult to locate the exact location of the sub camp during field visits carried out by Tiergratenstrasse4Association between 2006-2008. It should be emphasized that it is not certain today whether the Nazi and post war communist camps were in the same location in Sosnice.

The exact date of the establishment of a forced labour camp for German prisoners of war at the Sośnica mine in Gliwice is unknown. The camp had certainly opened by May 1946 and was part of the structure of camps of the Polska Policja Narodowa w Katowicach (Polish National Police in Katowice) and the Gliwickie Zjednoczenie Przemysłu Węglowego (Gliwice Unification of the Coal Industry). It was POW camp number 72 / VIII / 5. The prisoners were employed in the Sośnica mine. The number of prisoners in the camp on 31 May 1946 was 495 and in January 1948 473. According to official data, 35 prisoners died in the camp, while according to the accounts of former prisoners – about 50 died. The camp was dissolved at the end of June 1949.[1]

The Preservation Status of the Former Sub Camp Aussenkommando Sosnitz

There are no remnants of the former sub camp Aussenkommando Sosnitz.

There is no plaque, information table or memorial to the former sub camp.

The Auschwitz-Birkenau State Museum had not visited the site of Aussenkommando Sosnitz sub camp. 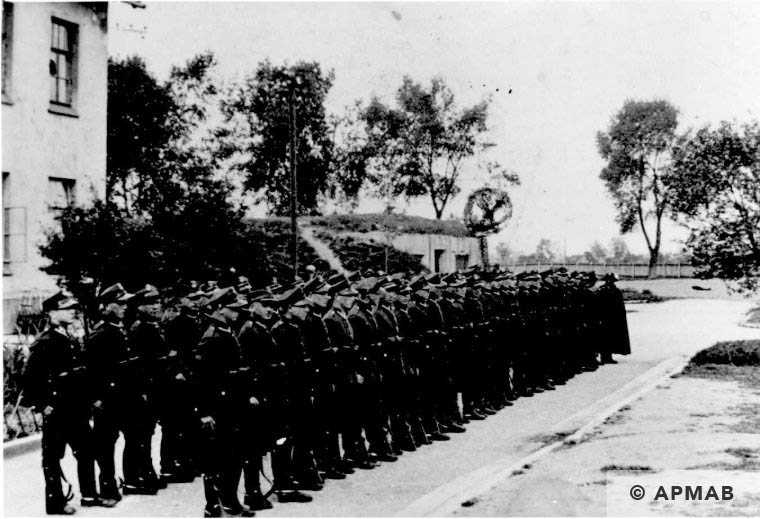 Barracks of the Polish army in the area of KL Auschwitz before September 1, 1939. APMAB 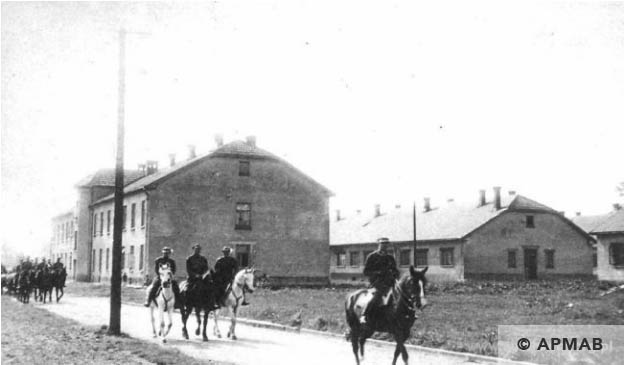 Barracks of the Polish army in the area of KL Auschwitz before September 1, 1939. 2 APMAB 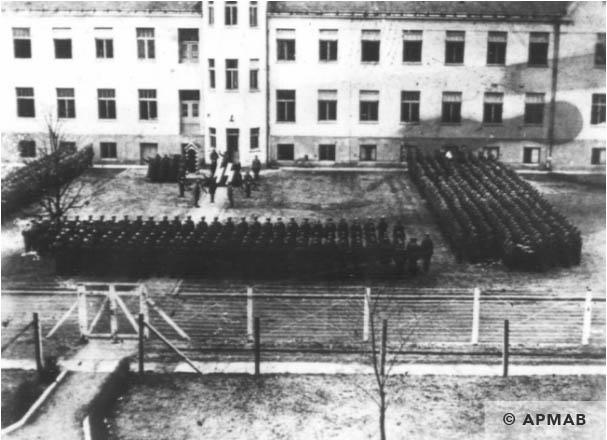