Other Name of the camp

The felled timber was transported to Auschwitz-Birkenau and used as fuel to burn the bodies of Jews exhumed during the Aktion Sonderkommando 1005.

Prisoners were accommodated in the stables at the Radostowice foresters office.

The History of the Sub Camp Radostowitz

Radostowice village is situated in the administrative district of Suszec. Radostowice is bordered to the east by Pszczyna (district of Stara Wieś [1]) and partly Czarków, Kobielice in the west, and in the south Poręba. It´s northern boundary extends to the state owned forests. From 1938 in the northern part operated a railway line with a station at Radostowice.

The establishment of this small sub camp was preceded by preparations for the arrival of the prisoners, remembered by the forest ranger Antoni Pastuszka: “During the German occupation I was working in the forest of Radostowice, Forestry Office Kobiór, about 500 metres away from the railway station. The tasks of the foresters were set by the head ranger, a German civilian named Gerlach. Probably at the end of 1941[2]  (exact dates I cannot remember), Jan Kotas and I were instructed to prepare a room for the prisoners, who would be brought from the Auschwitz camp to work in the forest. As the ranger Gerlach had farms and farm buildings empty and available, he instructed us to use them. In brick stables (about 5 m away from the office) two iron bunk beds were set up. I do not know who brought them, because at the time I was working in the forest, and they had been brought and placed in front of the stable.” [3]

Other adaptive works included installing iron bars on the windows, and also security doors. Inside the stables a primitive latrine was built. [4]

The exact date of establishment of the sub camp in Radostowice is unknown. However, the sub camp was probably established in September 1942, the first time the name Radostowice appears in the travel orders, on 7 September 1942.[5] About 20 prisoners were sent in trucks directly from the main Auschwitz camp. They were accompanied by four SS guards. [6]

The prisoners were mostly Jews. They were dressed in standard striped prison uniforms. Little is known about the conditions in which they lived, as the civilian forest rangers were not allowed to enter the stable where the prisoners slept.

A standard working day was as follows: “The work began around 07.00 hrs and went on until 19.00 hrs. They always walked more than 3 km on foot, armed with tools such as axes and saws. They worked in Szczyrk and Babczyna Dolina…The prisoners worked in cleaning up the forest, ie removing thickets of young trees of maximum 20 years old, which were dry, bent, or broken, or which had become fused together. Mostly deciduous trees were cut down, and birch, because they burned well in their newly cut state. The felled trees, were tied into bundles and taken out onto the road. In the evenings after work there arrived in the woods in Radostowice heavy trucks, on which the felled trees were transported to the concentration camp at Birkenau.” [7]

The area in the forest where the prisoners worked was surrounded by SS men. Prisoners could not leave the place marked out by the SS as the work area. Antoni Pastuszek testified that one time a prisoner wanting to bring a bundle of sticks to the road, crossed the imaginary boundary and was immediately shot by a guard. It is probably the only case of the shooting of a prisoner by a SS guard at the Kommando. [8]

Wood obtained in this way, from Radostowice as well as from the other so-called Waldkommandos: Kobior, Altdorf and Meseritz were intended as fuel for burning corpses in the cremation pits at Auschwitz-Birkenau where Sonderkommando 1005 had begun. [9]

Returning to their stables in the evening the prisoners carried their tools but also firewood for fuel.

When there was no demand for wood the prisoners worked in the brickyard located in Stara Wieś in the immediate vicinity of the sub camp Altdorf. [10]

The Radostowitz sub camp probably existed for around a year with a winter break in 1942/1943 due to the severe frost. According to some reports, prisoners were brought back in the Spring of 1943, although it is uncertain whether these were the same prisoners who had previously worked in the Waldkommando.

[2] Most probably the witness remembered the date incorrectly.

[9] Sonderkommando 1005 was the code name given to the coordinated action to excavate and burn the bodies of the victims of Nazi crimes in occupied Poland and the East. Prior to August 1942 victims were buried in mass graves. This included victims of the Nazi occupation of Poland from September 1939 and other Eastern European countries and Jews and other victims killed in the Nazi death camps, Treblinka, Belzec, Sobibor, Kulmhof, Maidanek and Auschwitz. Also the victims of the Einsatzgruppen in the Soviet Union. In 1942 the Nazi leadership decided to erase the evidence of their crimes and appointed SS-Standartenführer Paul Blobel to lead Sonderkommando 1005. Blobel began his experiments to find the best method to excavate and eradicate the remains of the victims in Kulmhof in June 1942. By September 1942 he had developed a simple method through the use of field crematorium built in the ground from brick and fuelled with wood, branches and oil. In September 1942 he invited representatives from Auschwitz concentration camp to visit Kulmhof to view these methods. The commanders of Auschwitz themselves were then tasked with implementing Sonderkommando 1005 for the tens of thousands of victims mainly Jews murdered in the so called White and Red bunkers in Auschwitz-Birkenau and buried near the Birkenau camp. It was likely one of the tasks of the Forestry sub camps of Auschwitz to gather wood and branches to be transported to Birkenau and used for fuel to burn the excavated bodies.

[10] Information derived from the testimony of Anthony Pastuszek. In witness statements associated with the sub camp Altdorf there was no information confirming that this was indeed the case.

Little is known about the SS guards of the Radostowitz sub camp. We are unable so far to determine any names of the SS men forming the guard unit. It is known that the SS men lived in the granary building located next to the stables where the prisoners were locked in for the night. [1]

The Evacuation of the Sub Camp Radostowitz

The prisoners were eventually transported back from Radostowice to Auschwitz concentration camp in the autumn of 1943.

The Post War History of the Former Sub Camp Radostowitz

The buildings were returned to the forestry office.

The Preservation Status of the Former Sub Camp Radostowitz

The original buildings of the former sub camp Radostowitz (Waldkommando Radostowitz) still existed on the visits of the Tiergartenstrasse4 Association in 2007 and 2008. Directions to reach the former sub camp: leave Oświęcim on ul Pszczyna No. 935 in the direction of Żory and then turn right at the crossroads in Radostowice. Going straight on you pass on the right side the small railway station Radostowice. There is a forest path where the Radostowice foresters office is located (Urząd Leśny Kobiór). This is where the sub camp Radostowitz was located.

The existing foresters office was used as the office of the sub camp, while in the granary accommodation was created for the SS guards. The prisoners lived in the stable.

Following the forest path in a northerly direction for about 3 km is the part of the forest of Kobior where prisoners laboured.

There is no memorial at the location of the former Auschwitz sub camp Radostowitz.

As far as can be ascertained the former sub camp Radostowitz had not been visited by the Auschwitz-Birkenau State Museum.

Topography of the Sub Camp Radostowitz 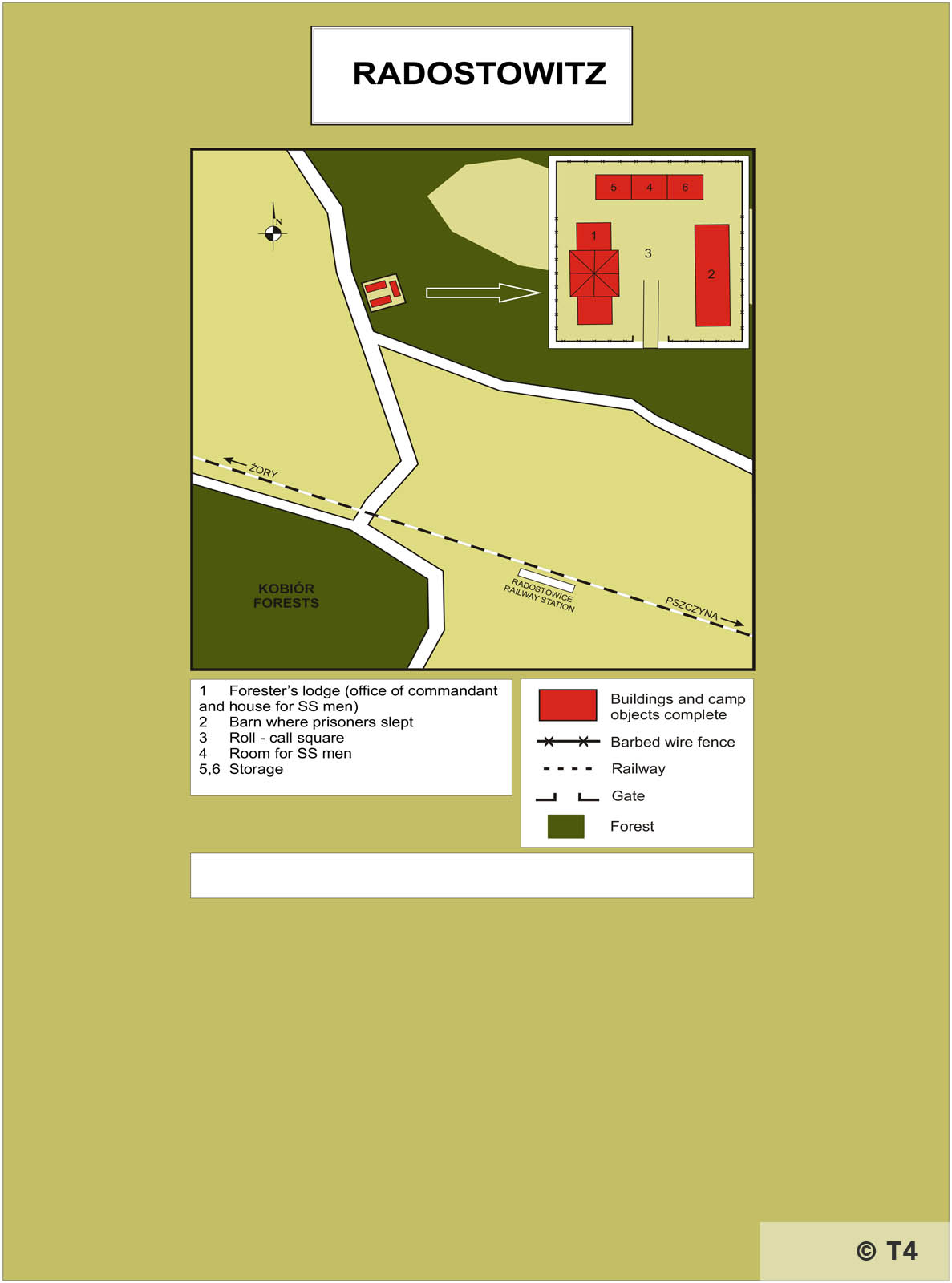 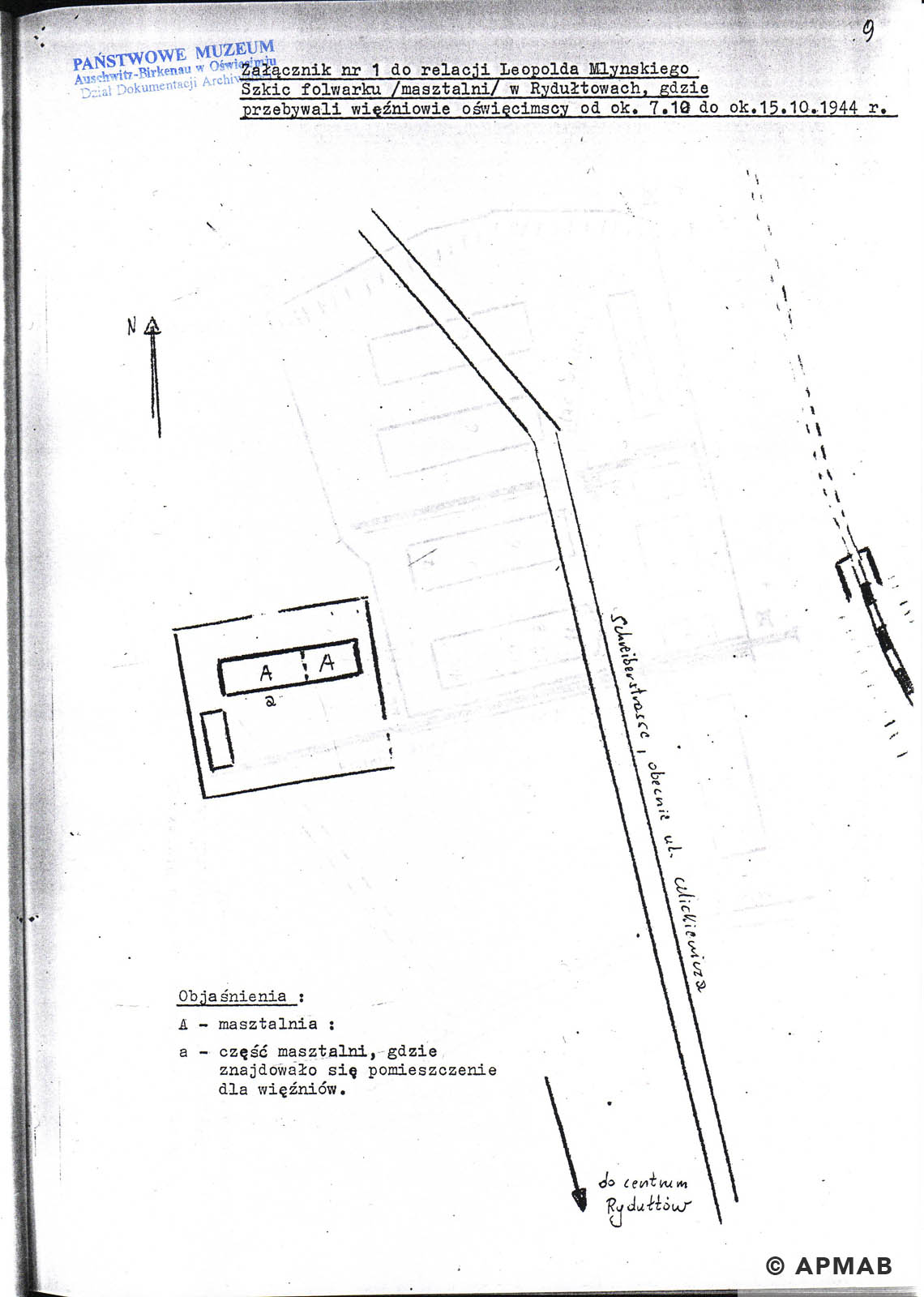 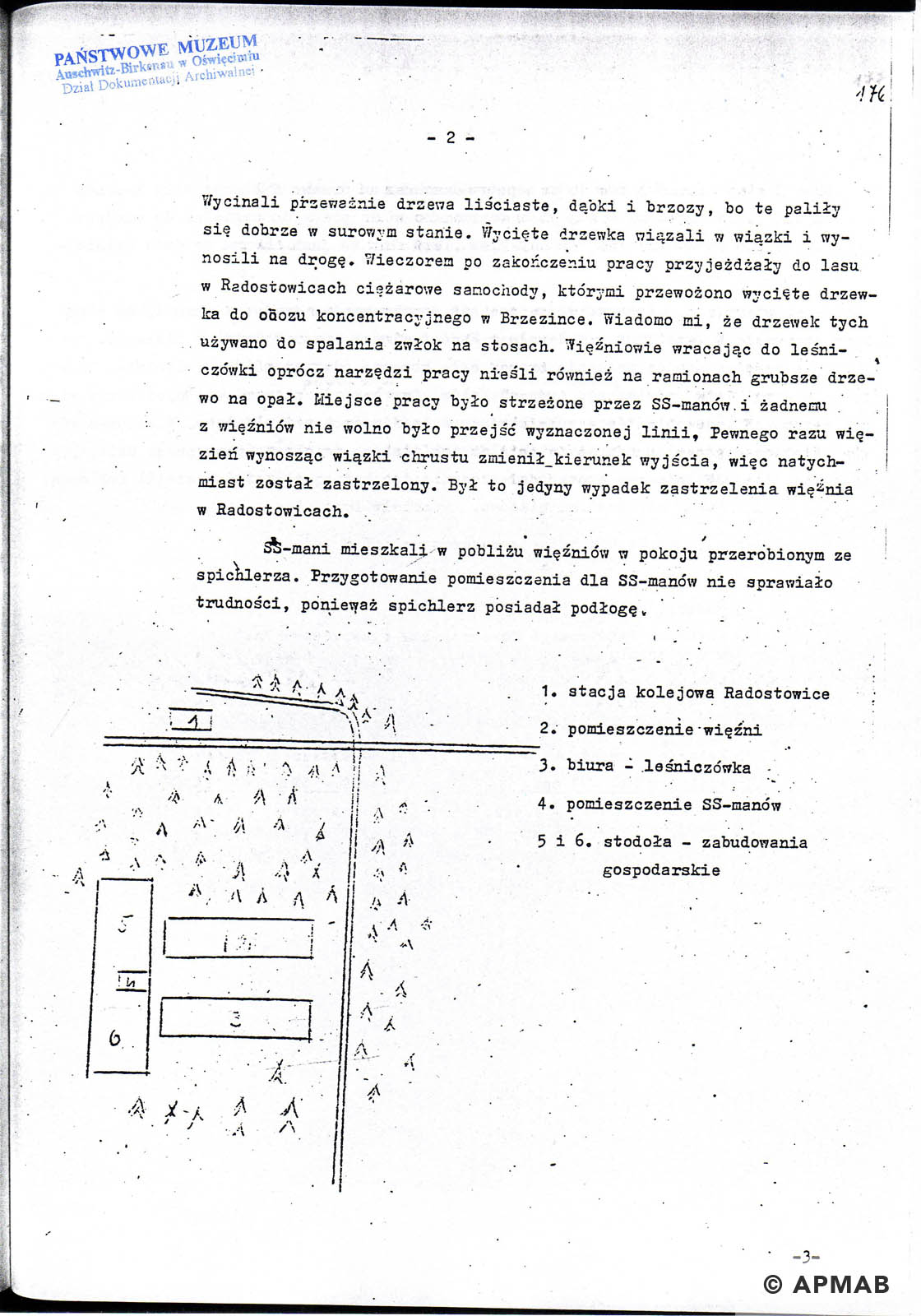 Location of the Sub Camp Radostowitz 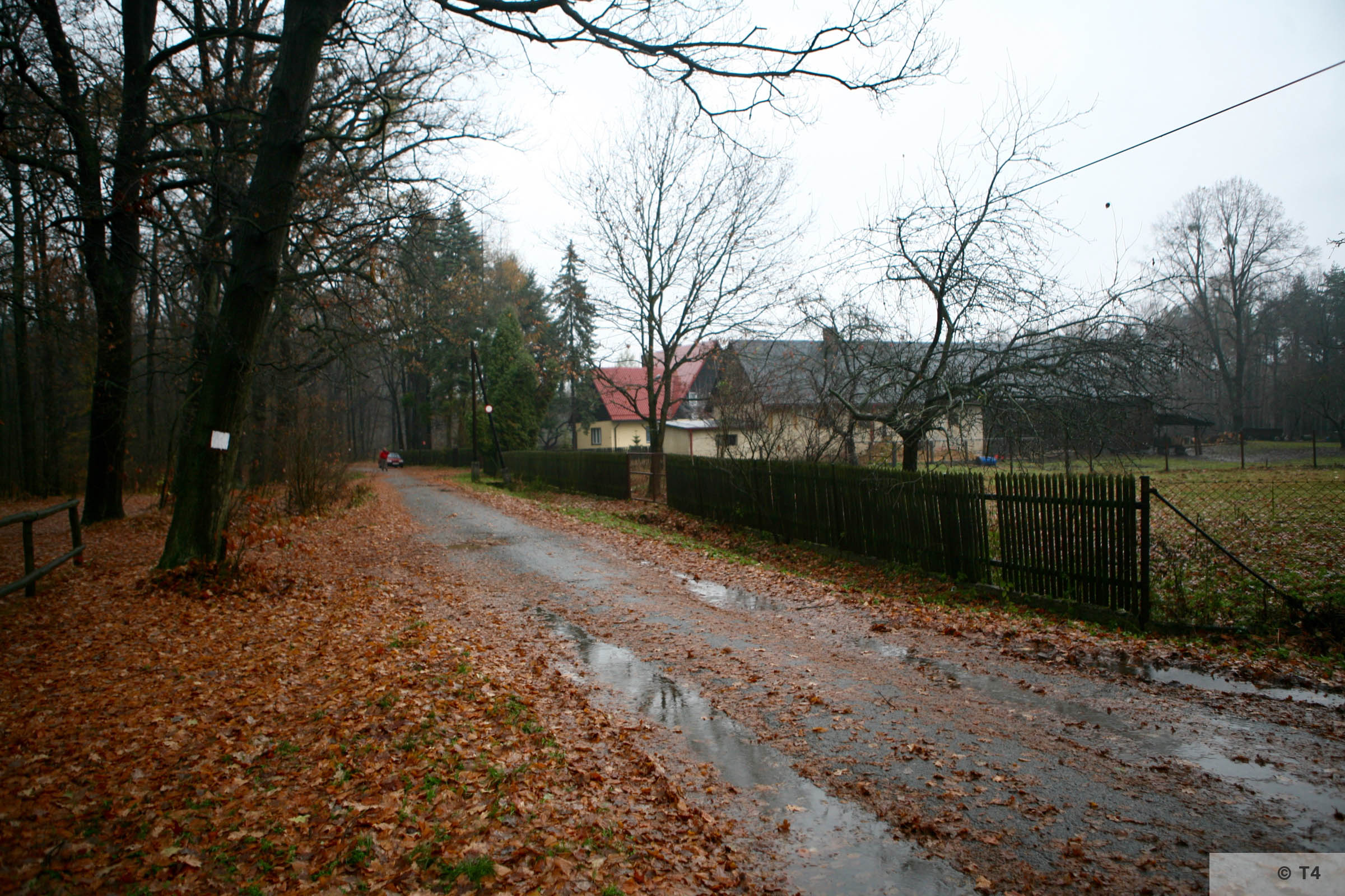 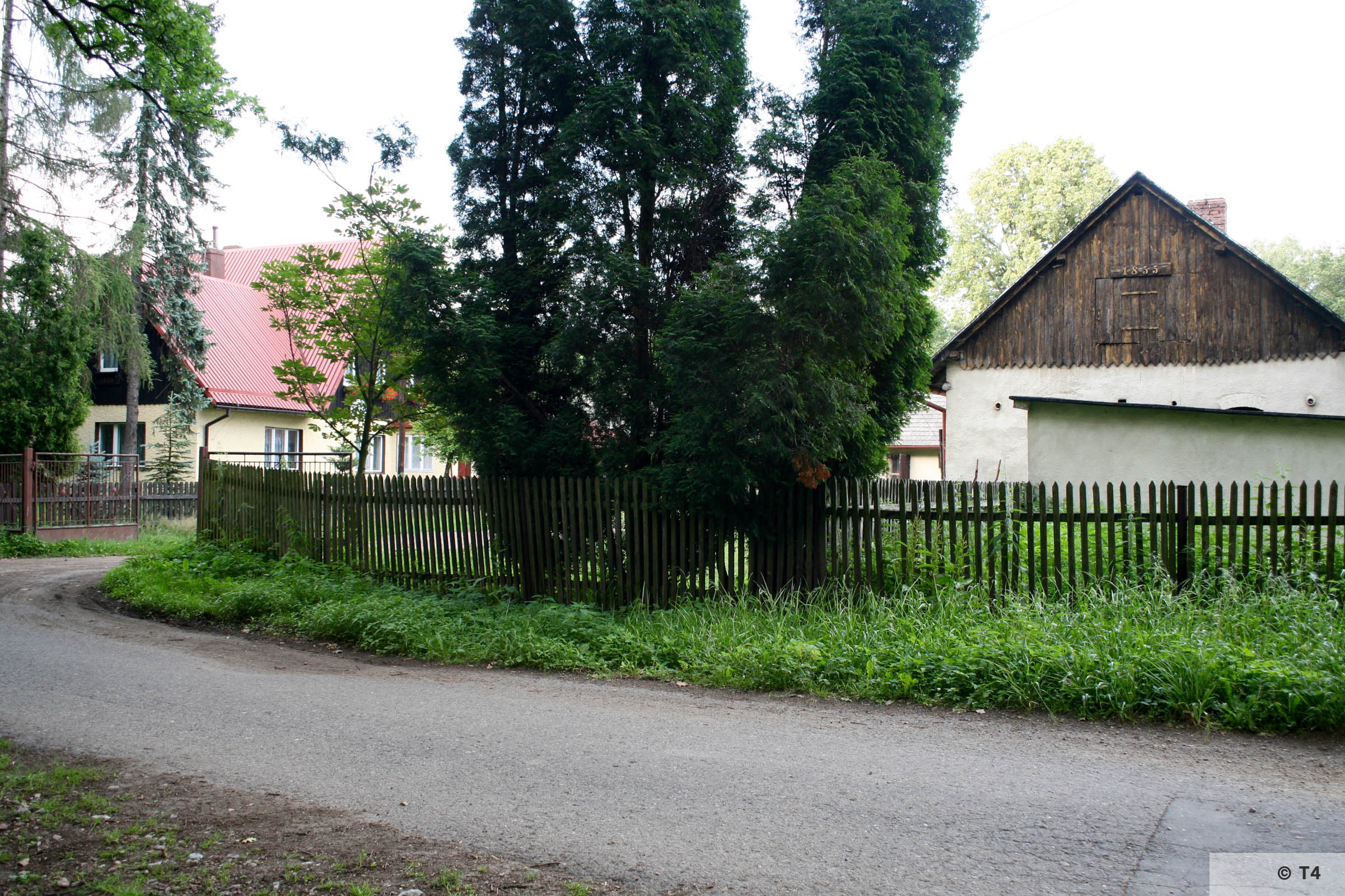 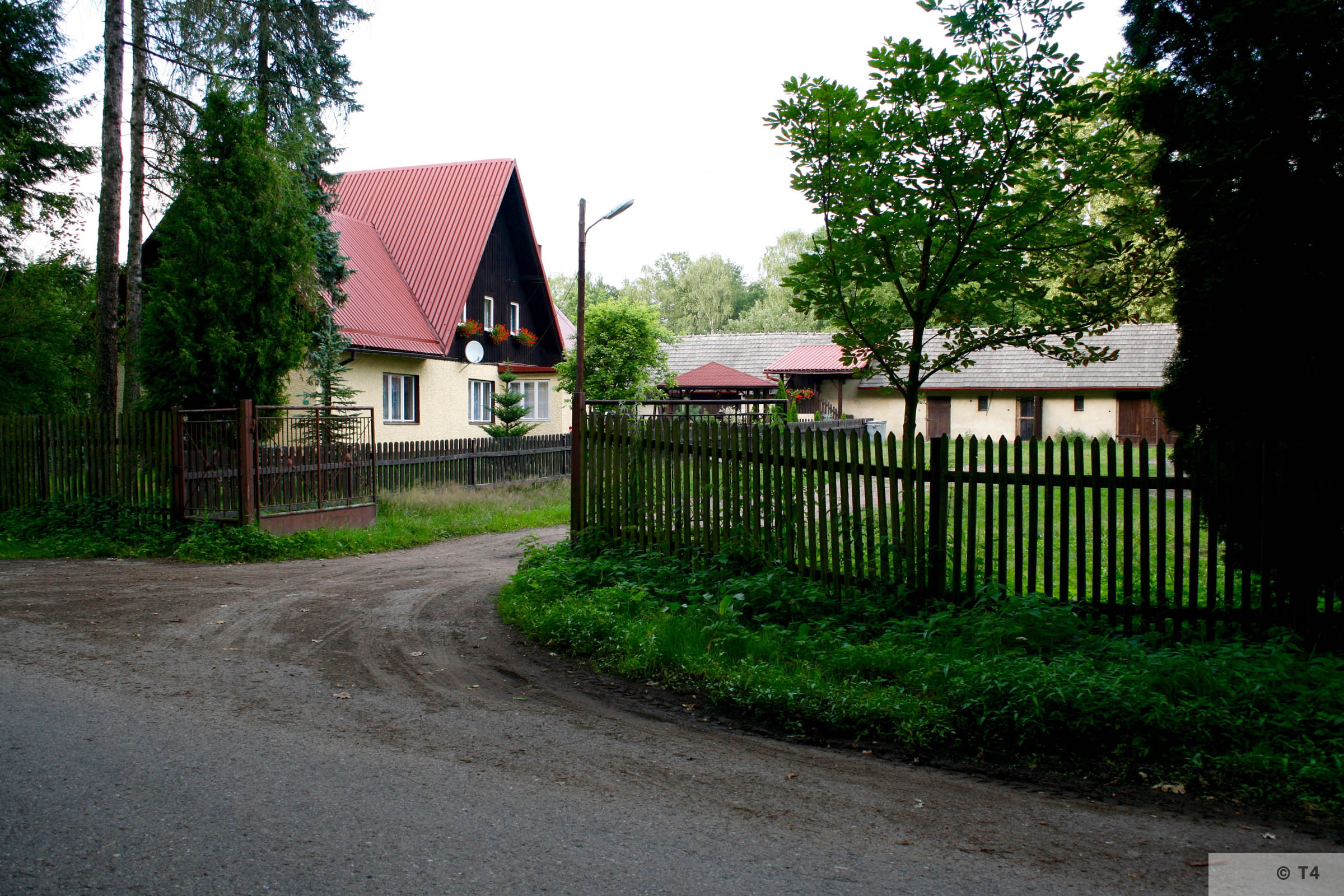 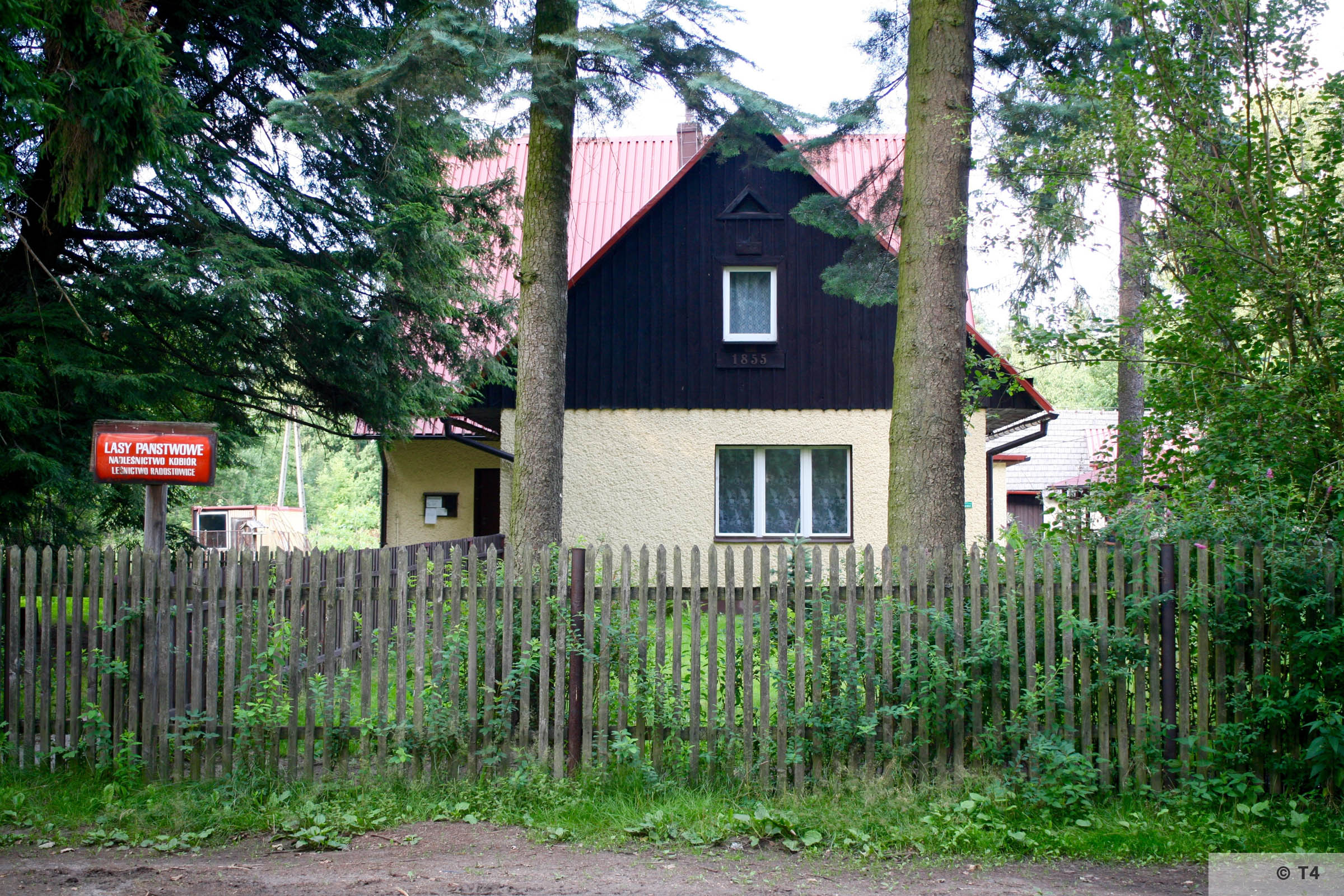 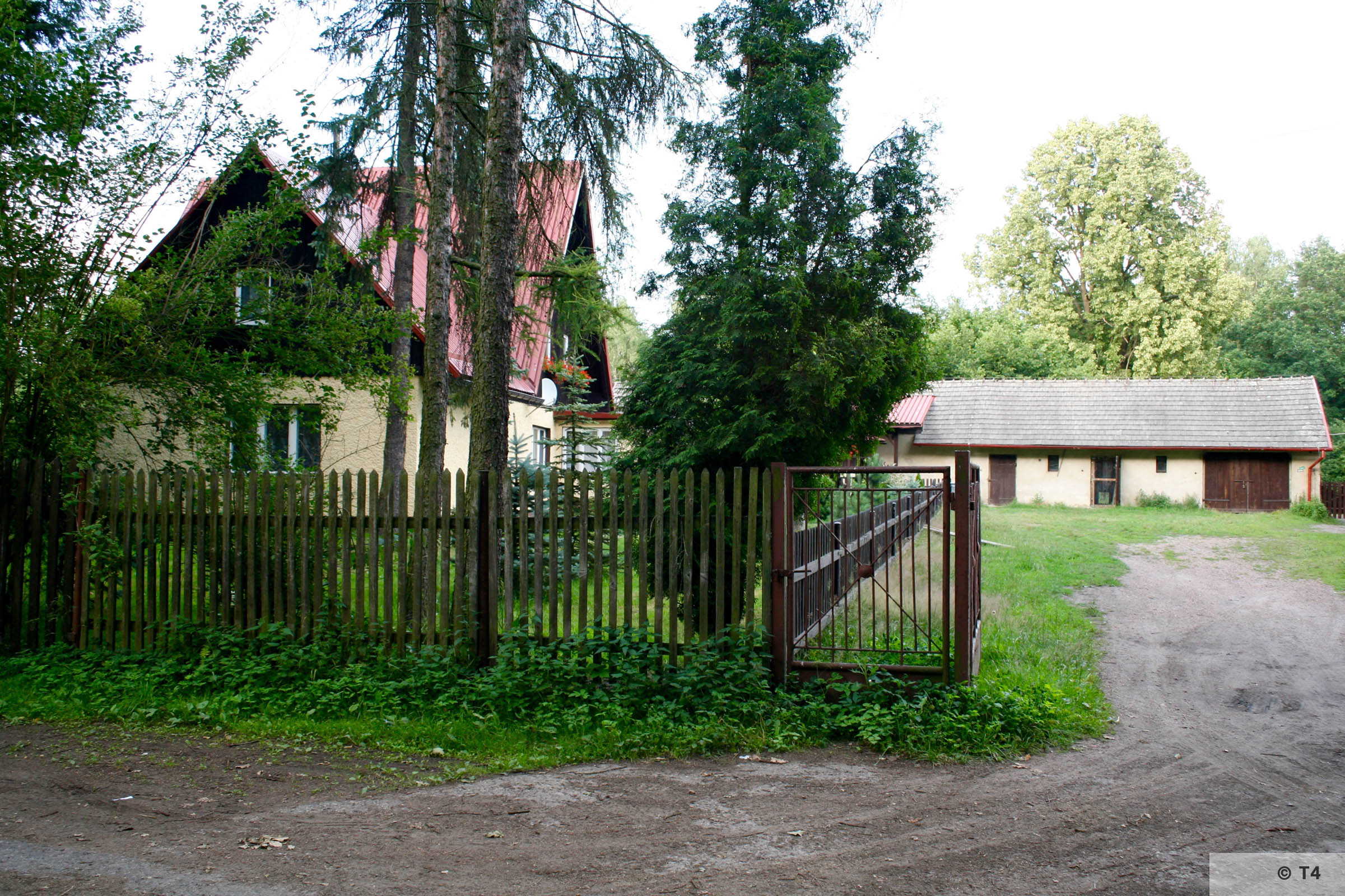 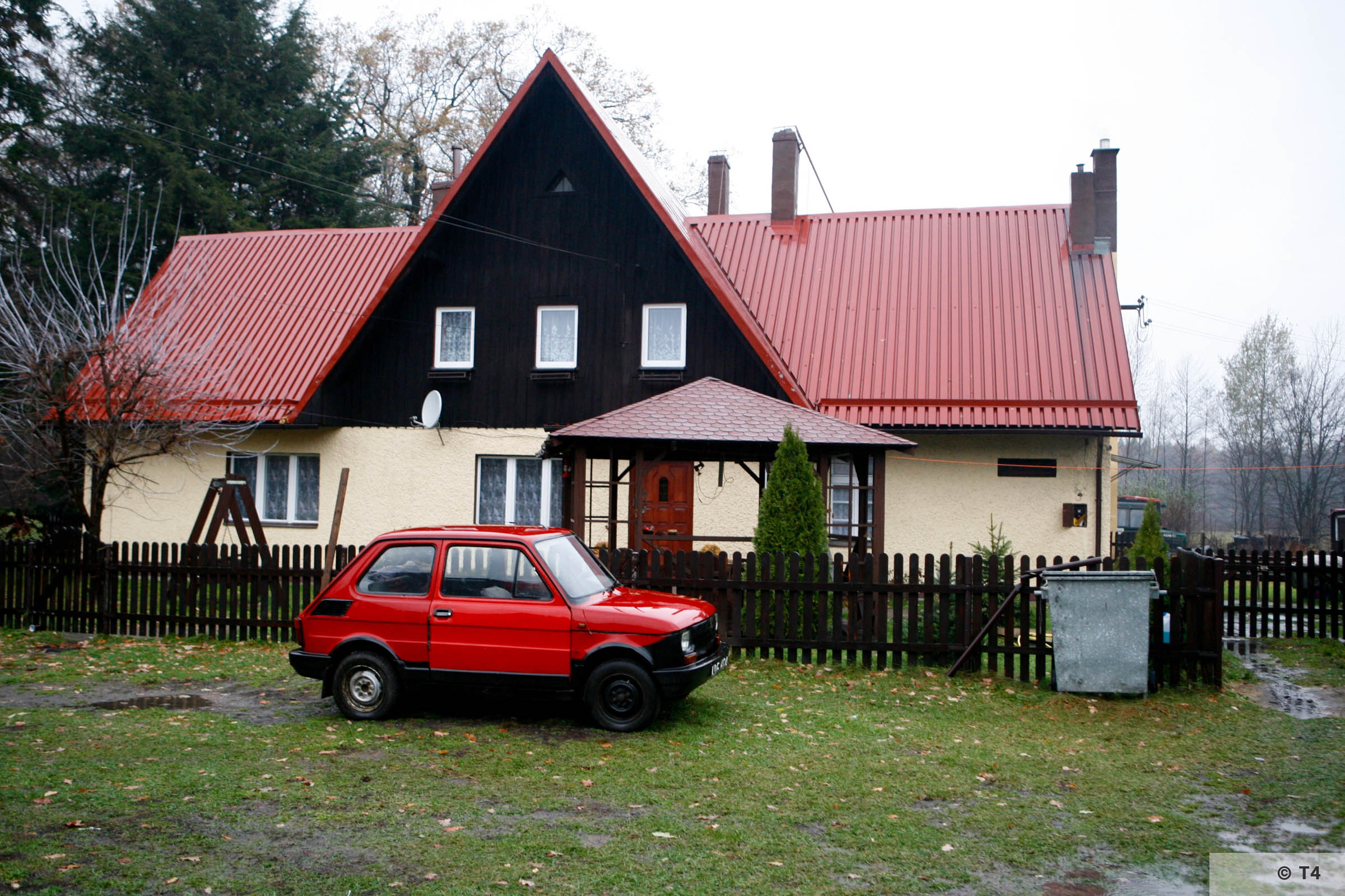 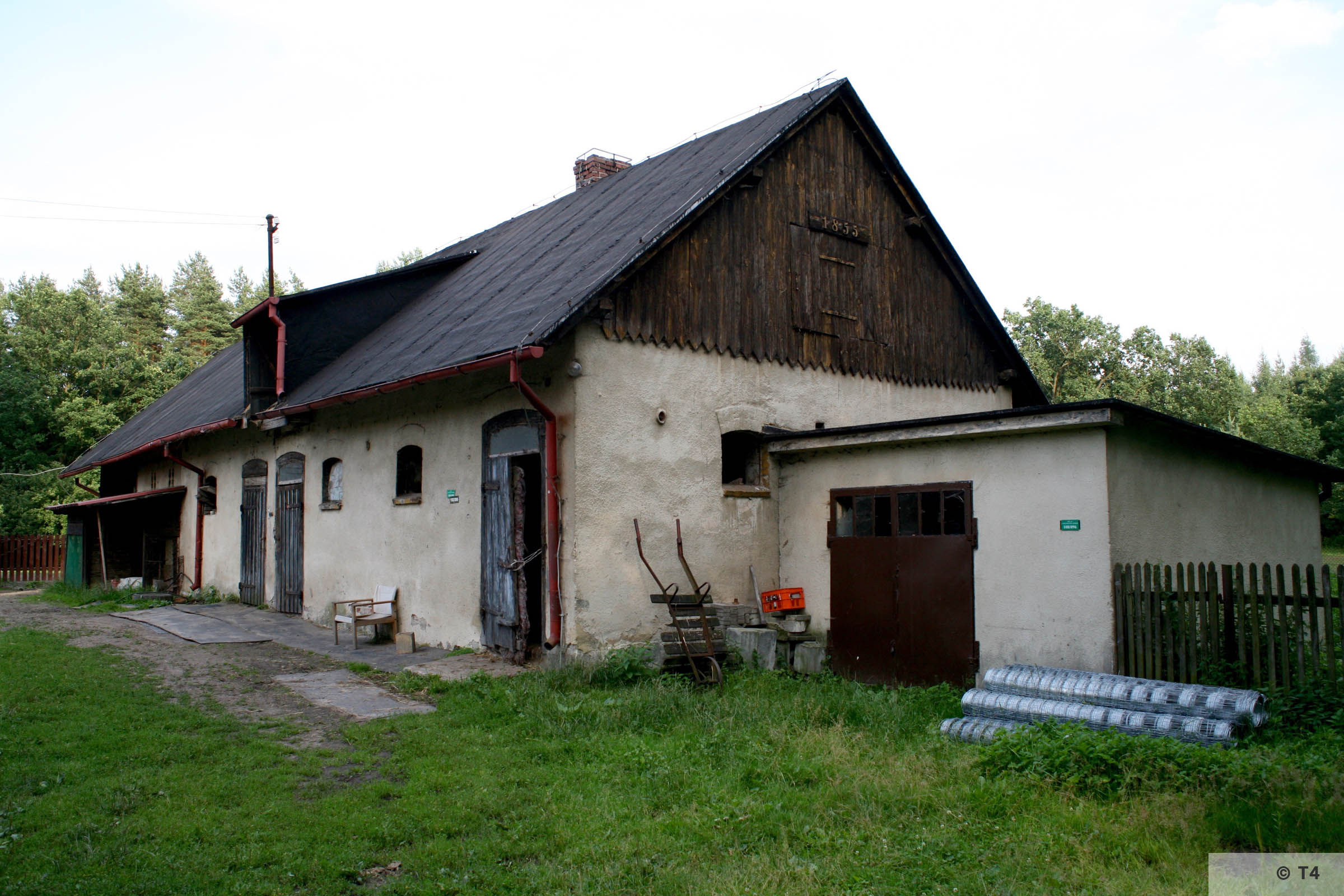 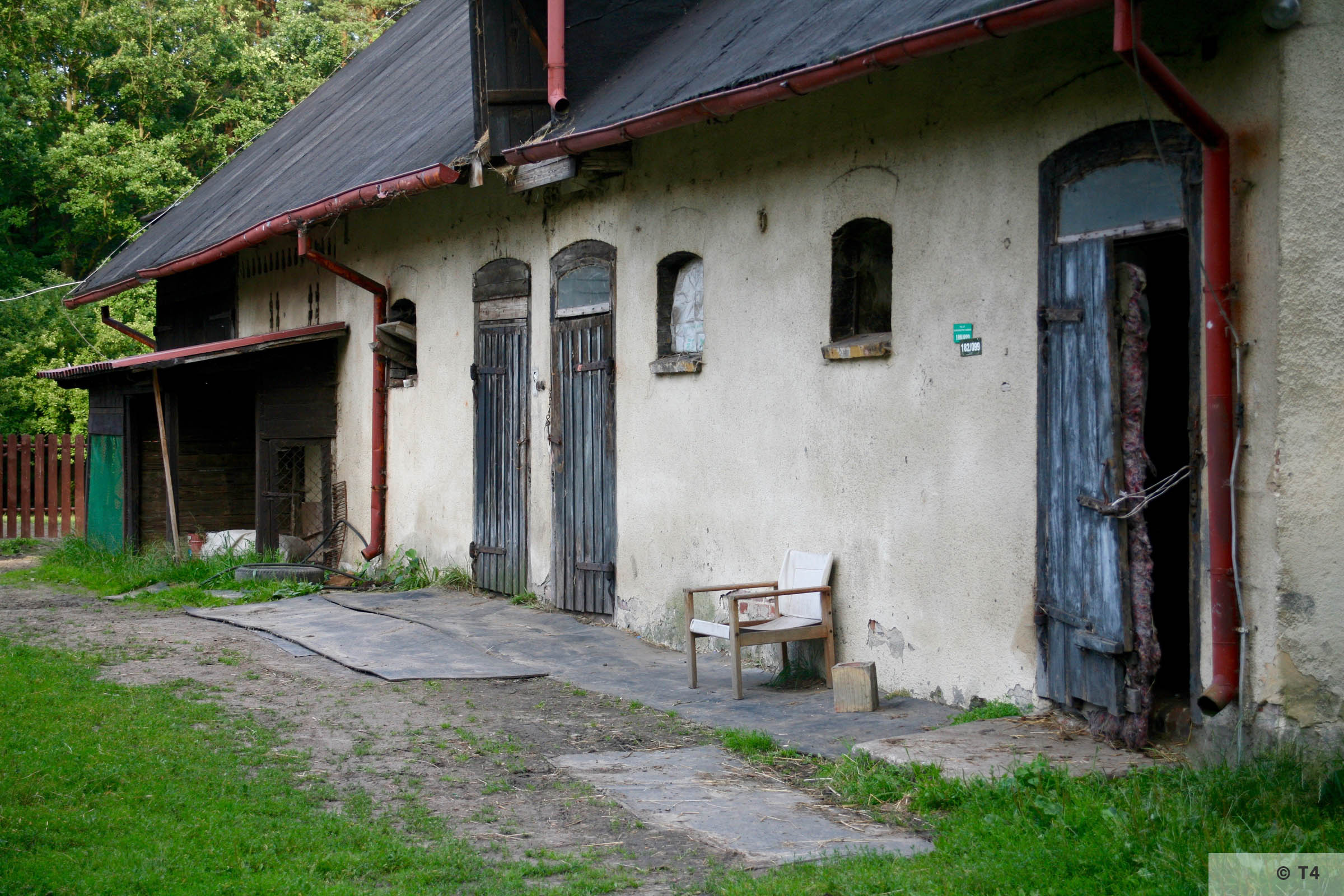 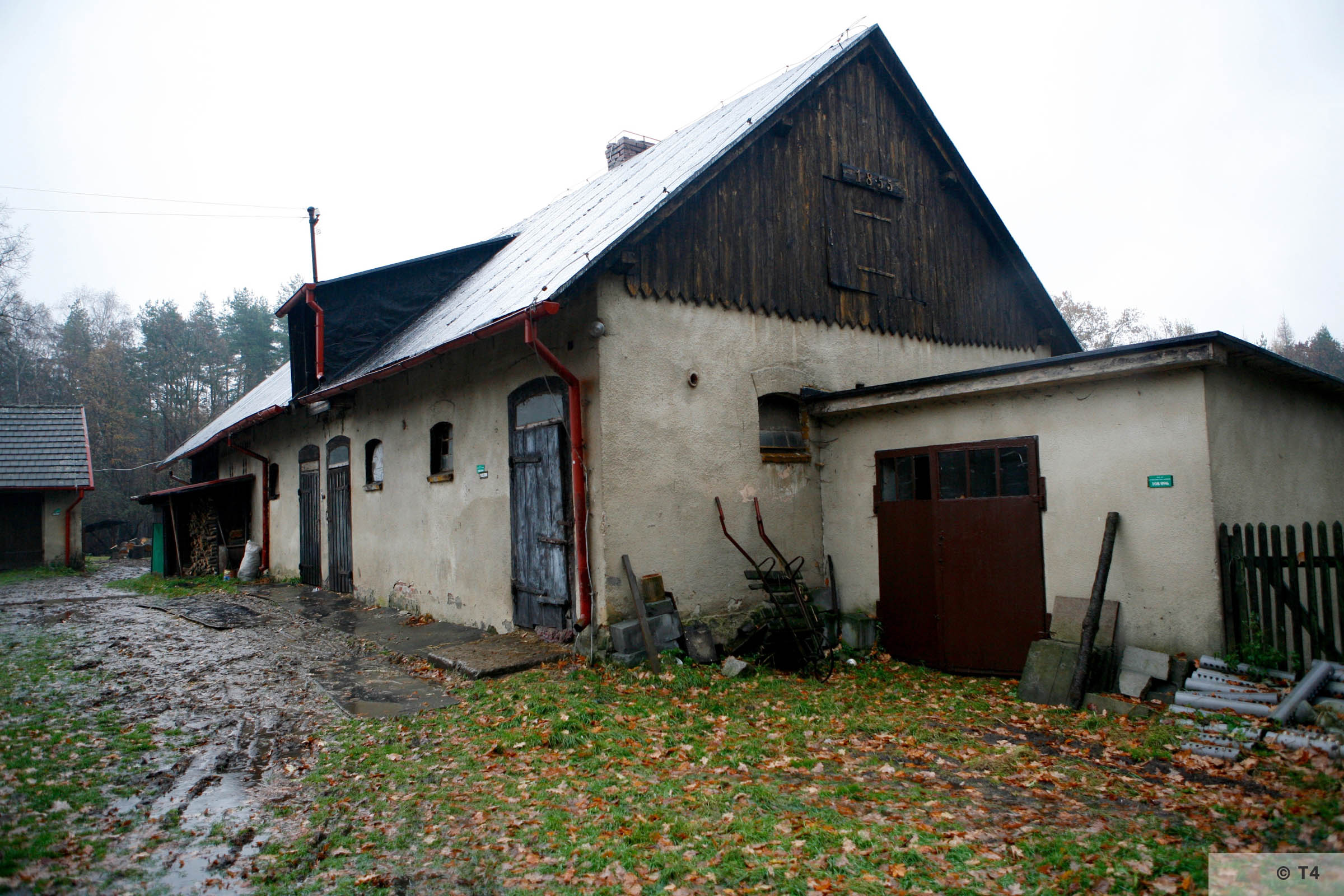 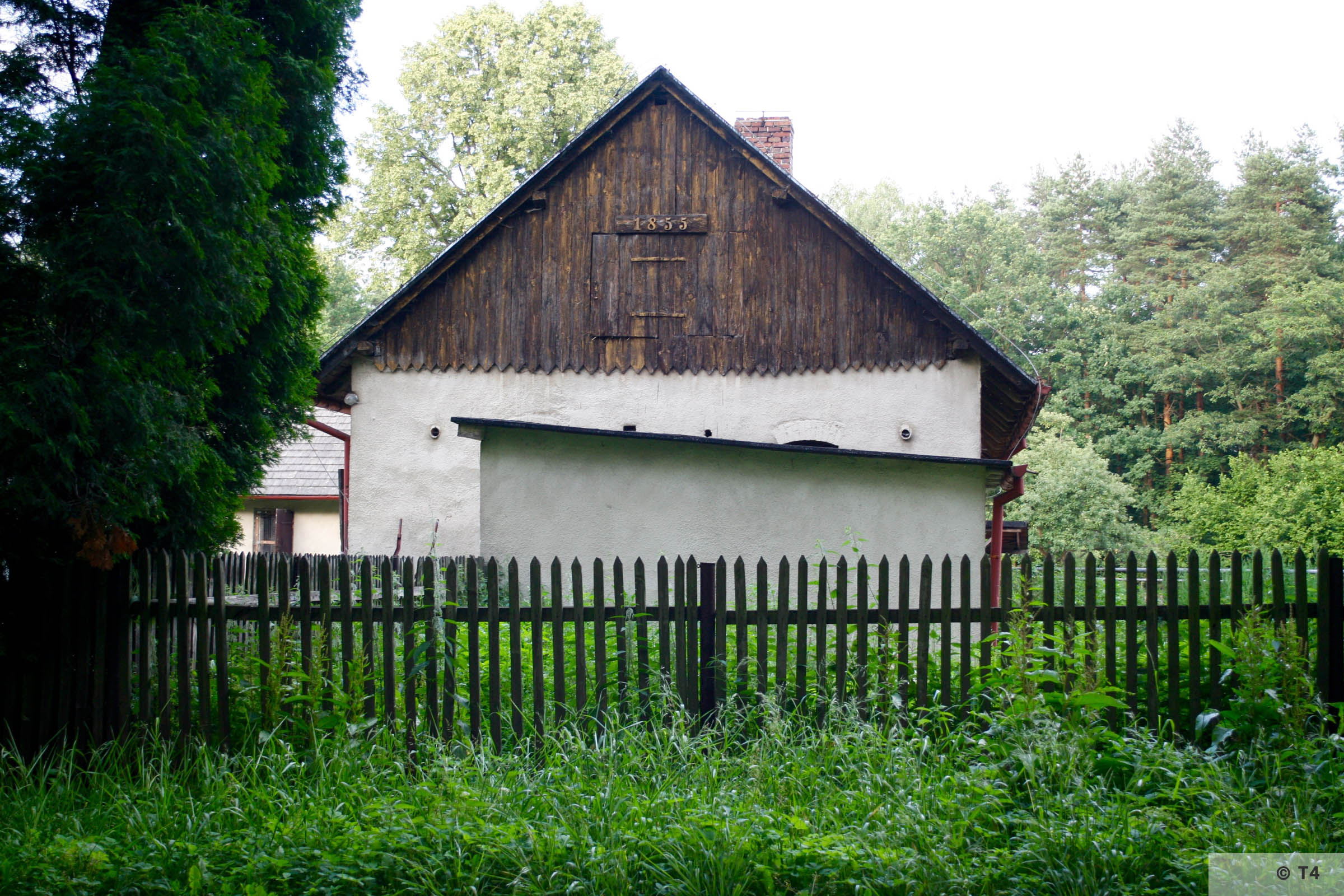 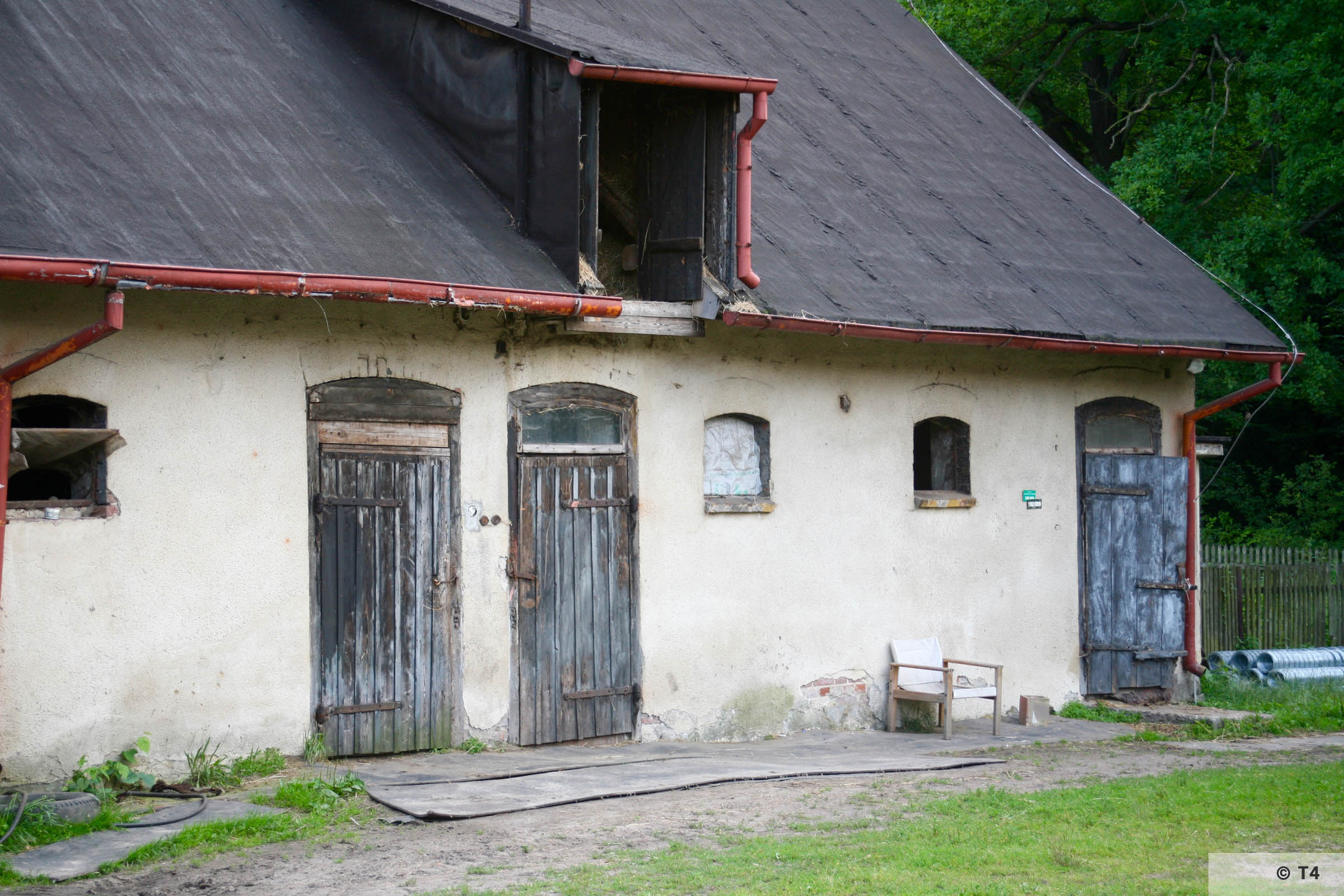 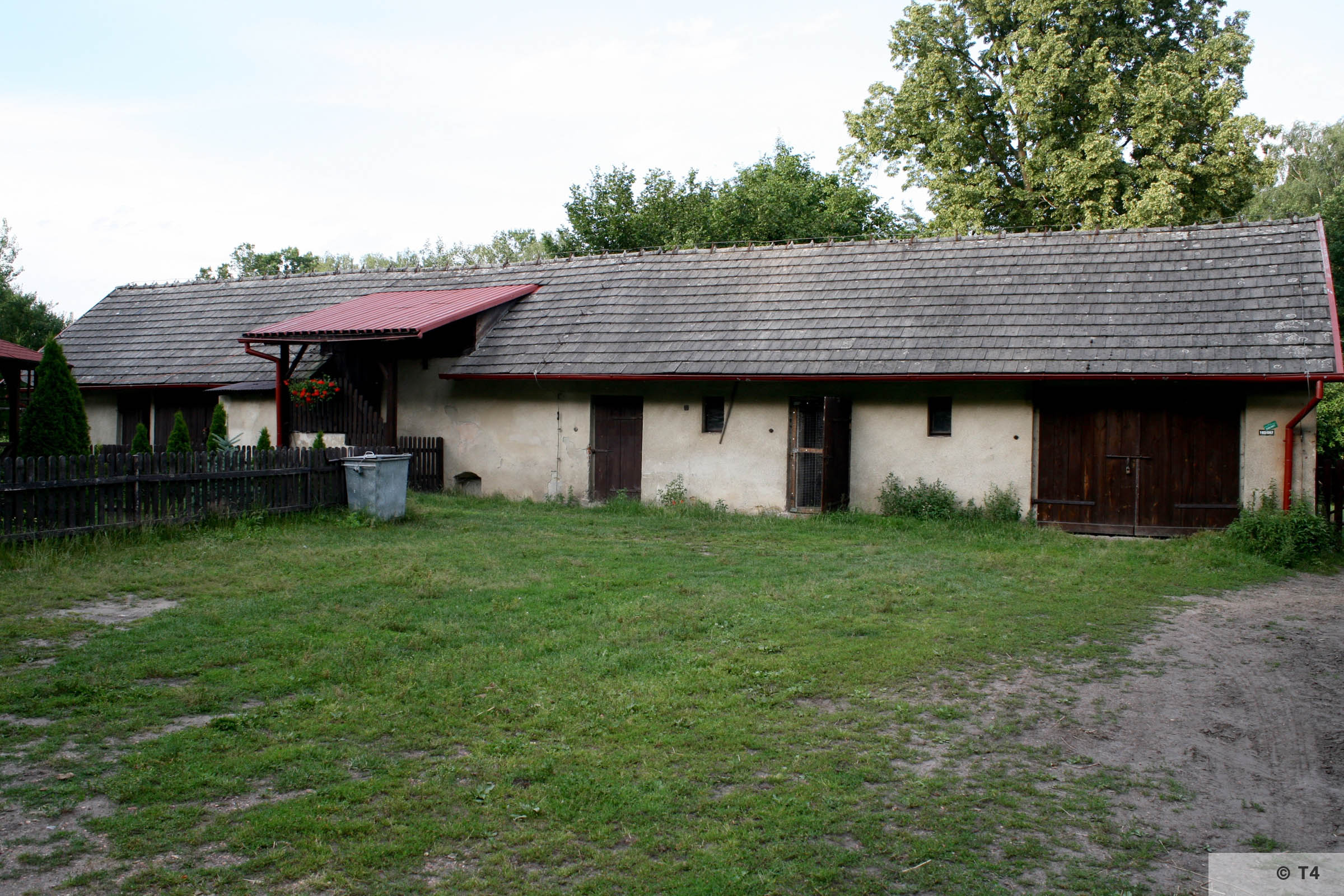 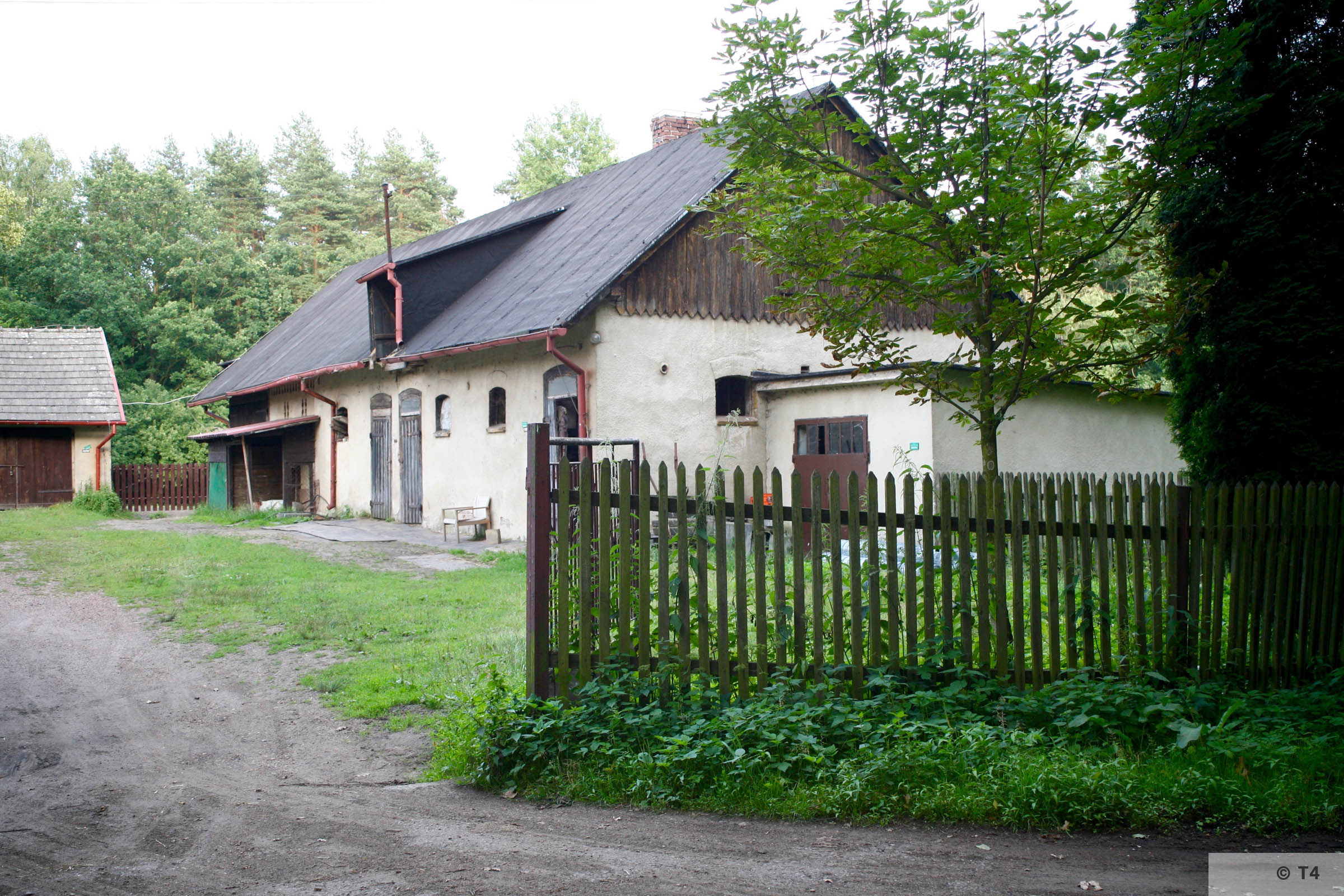 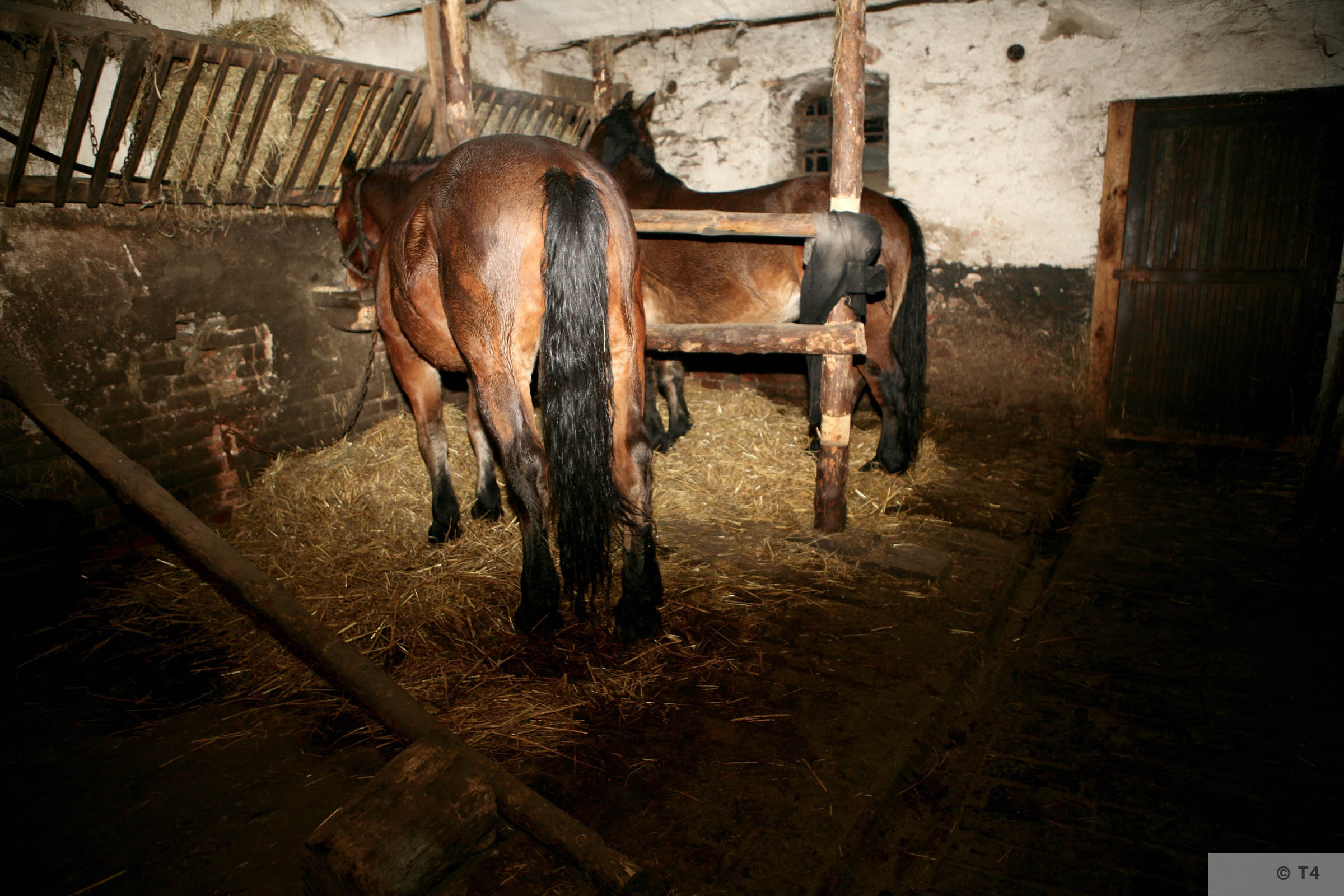 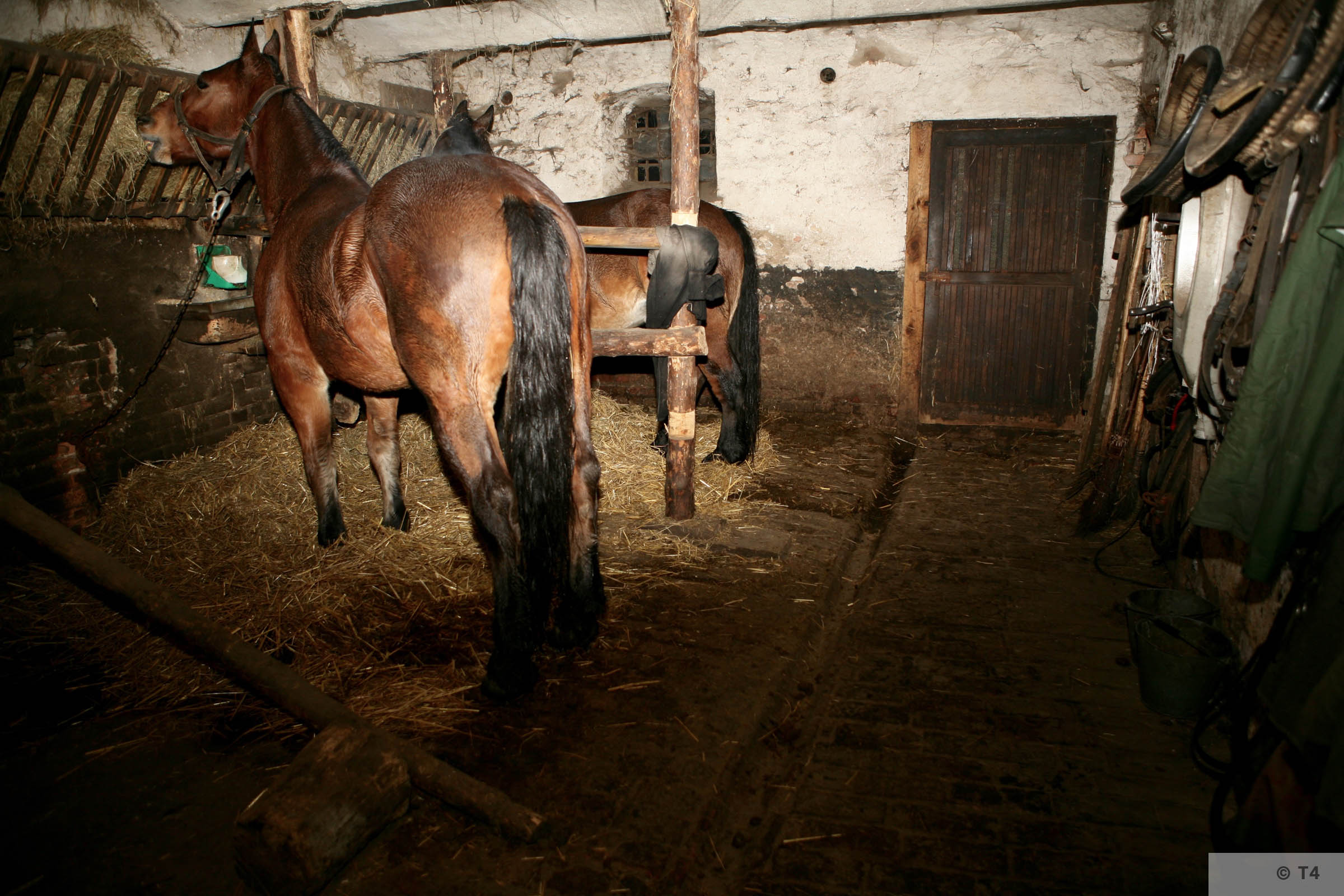 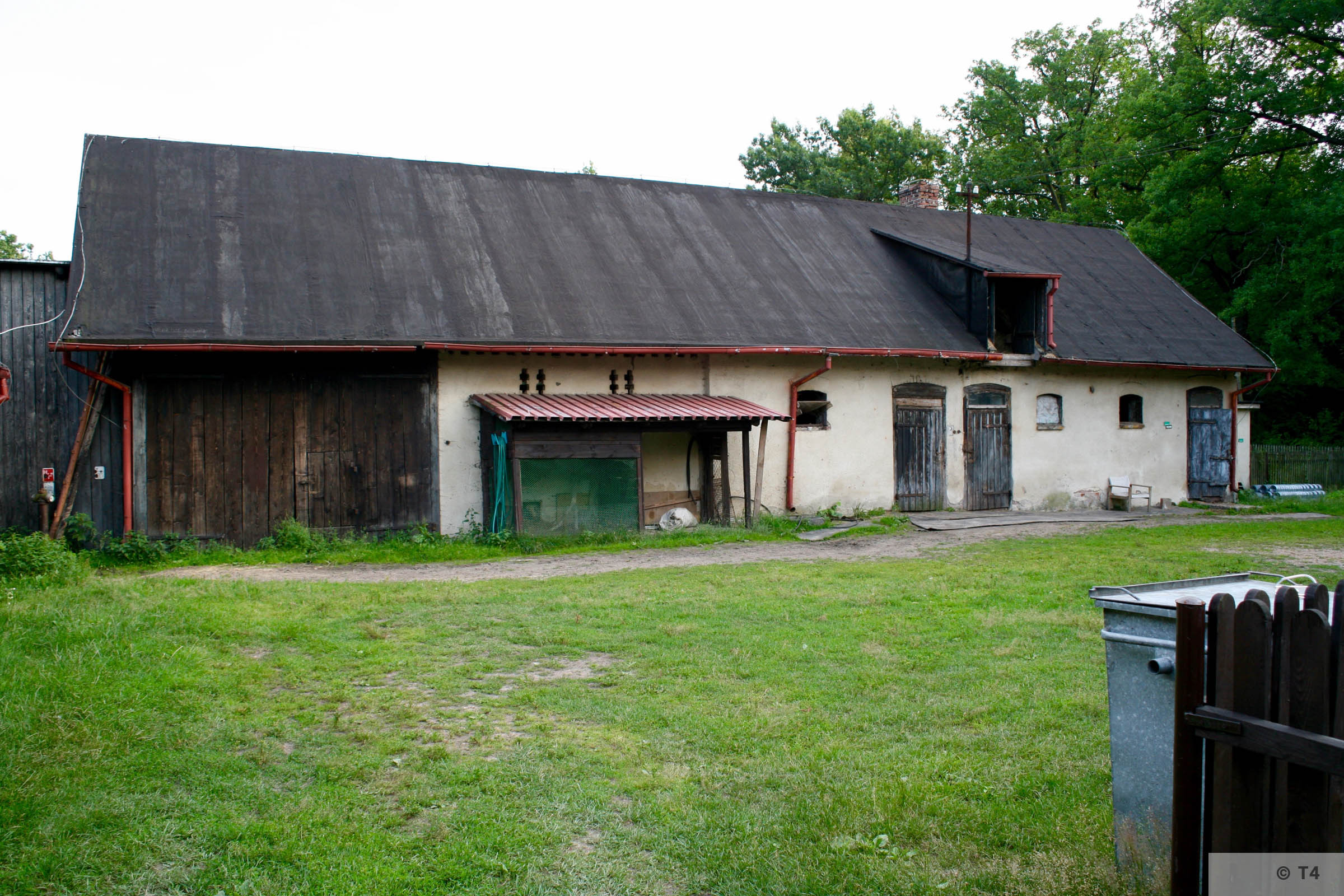 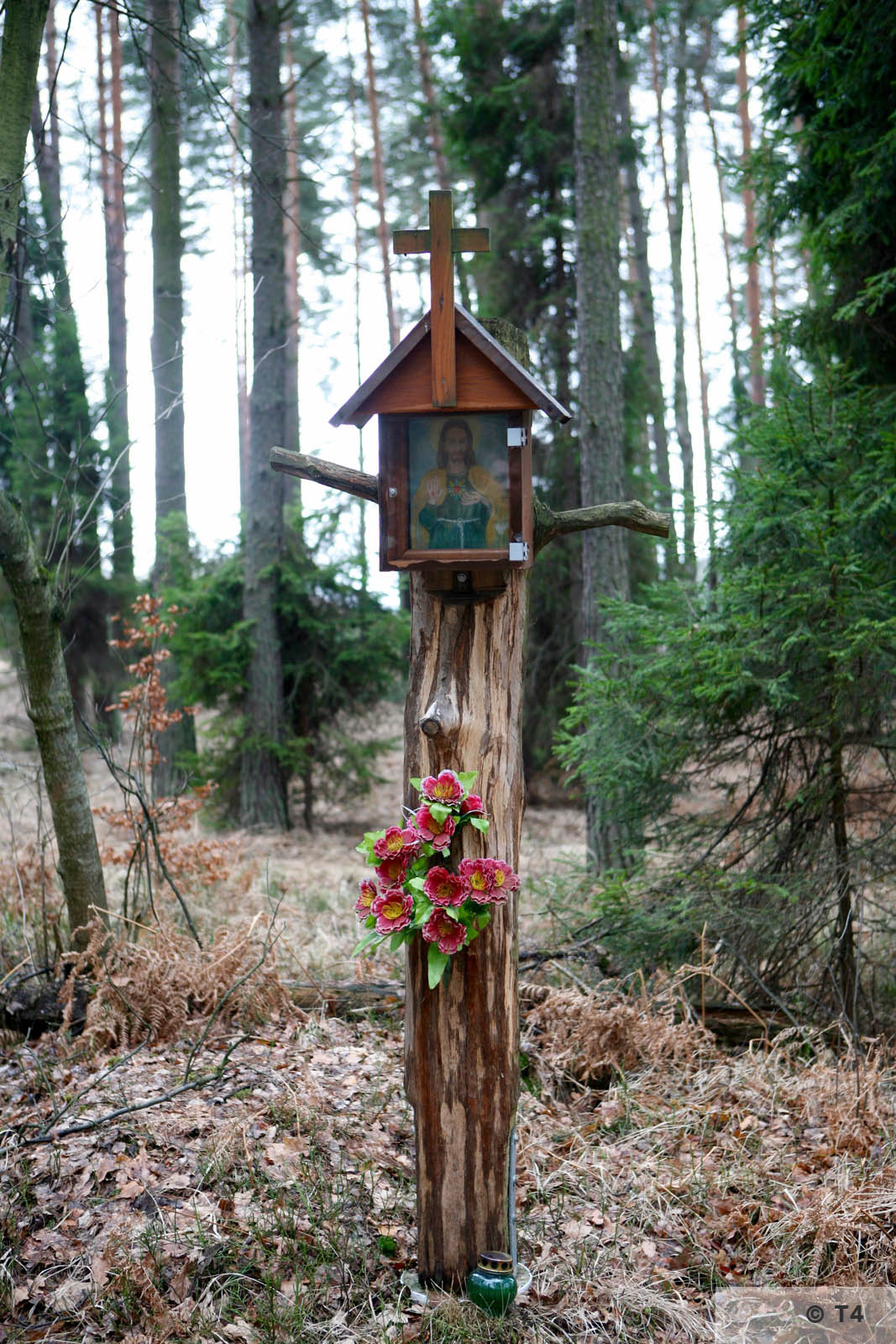 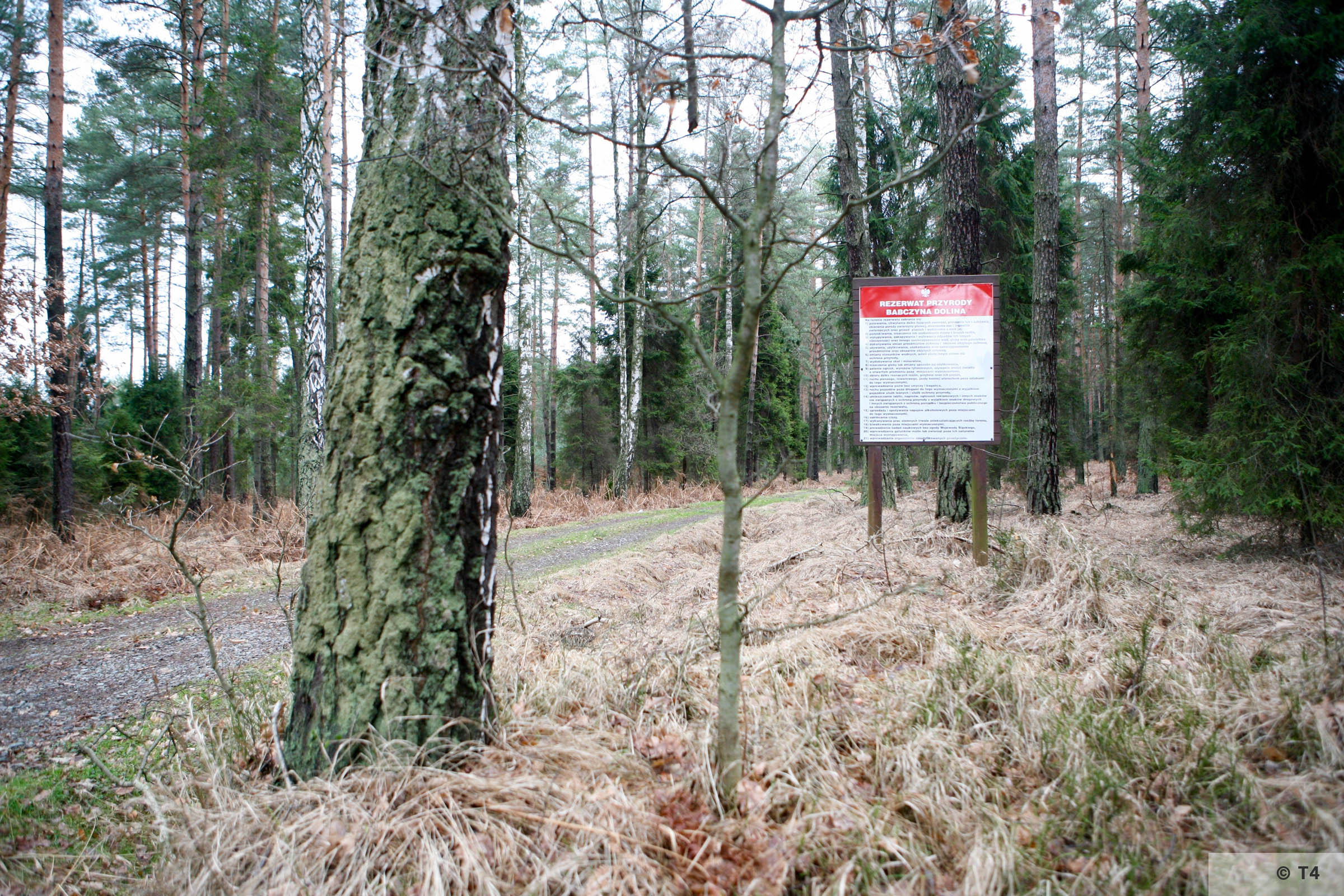 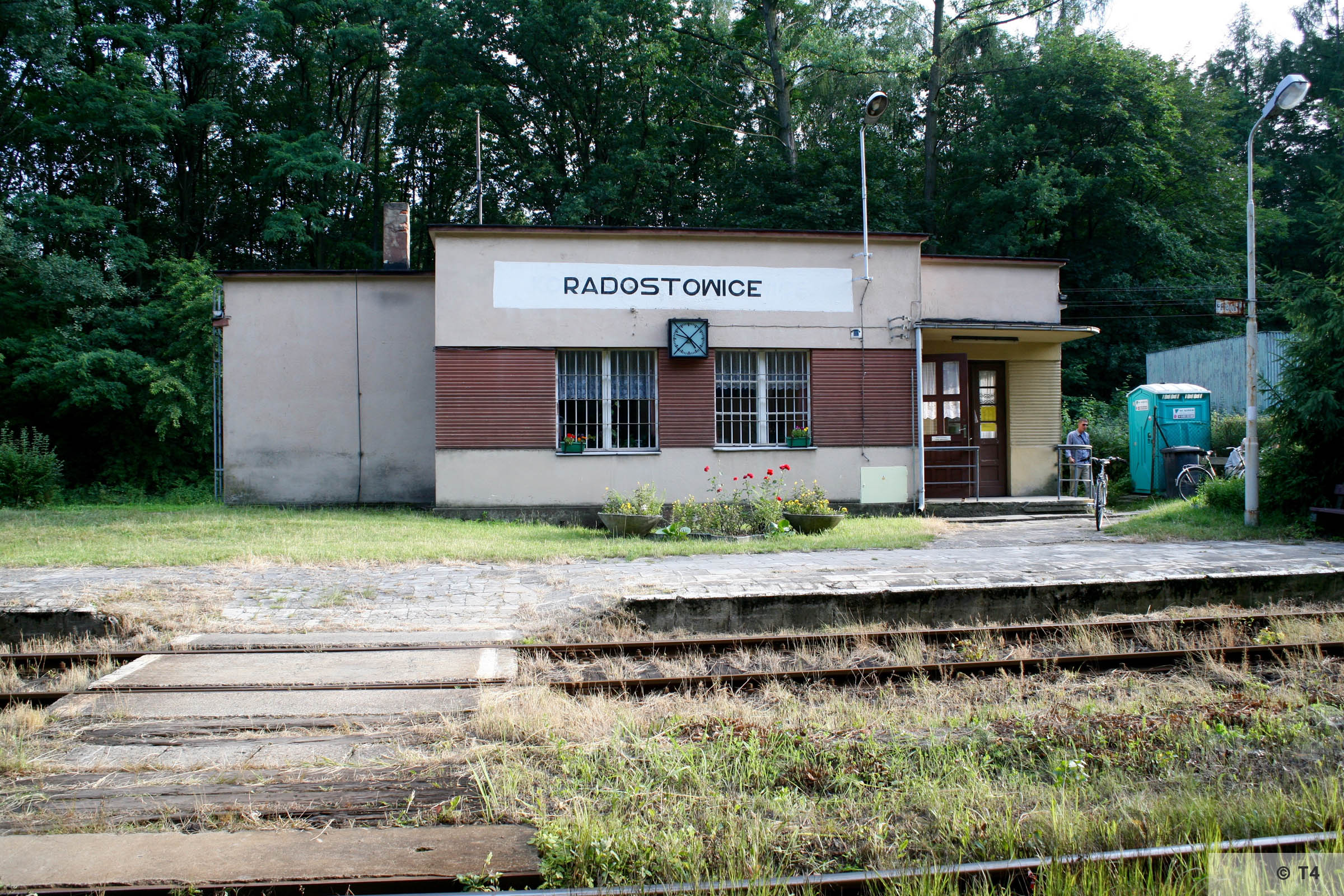 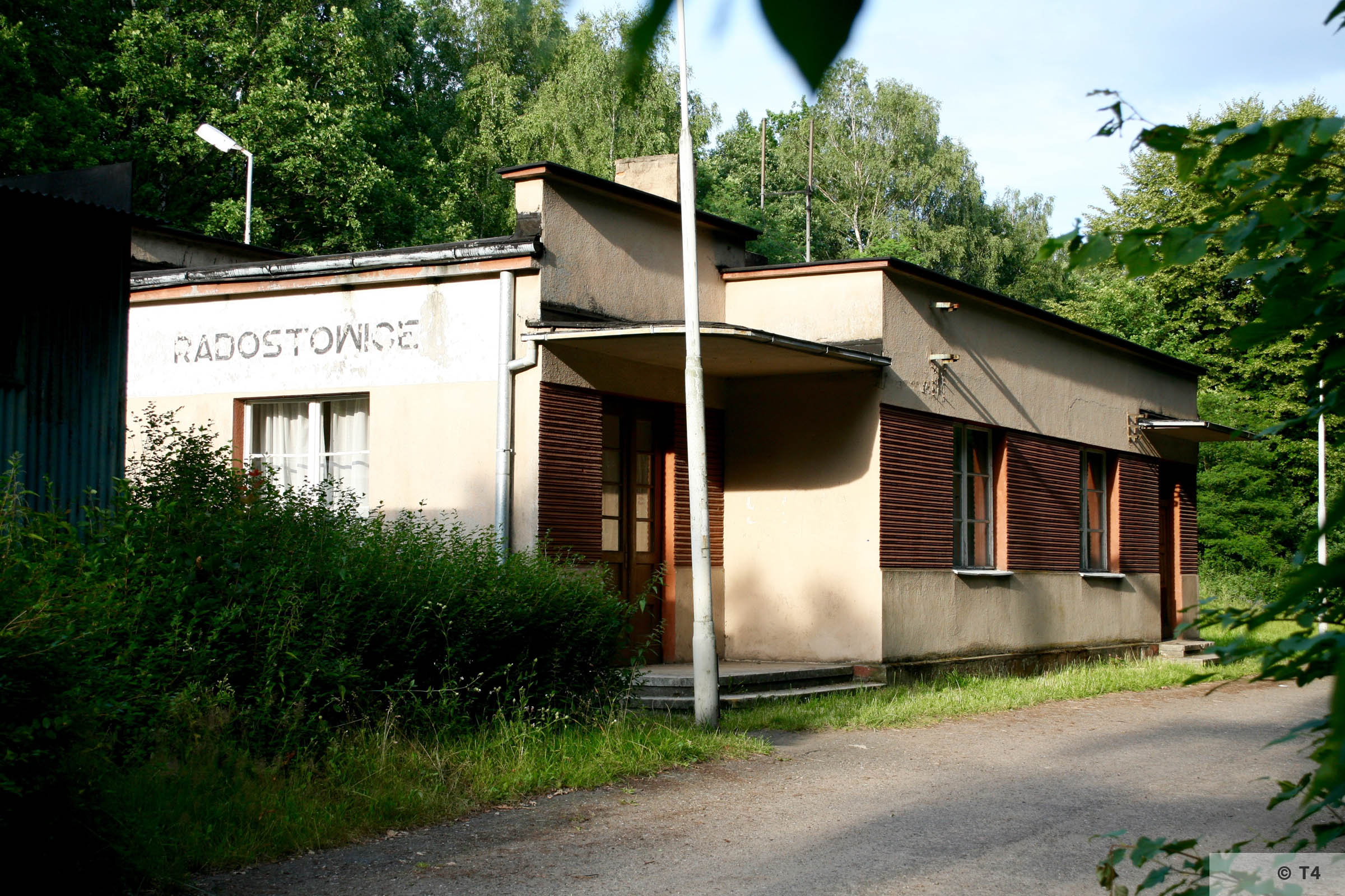 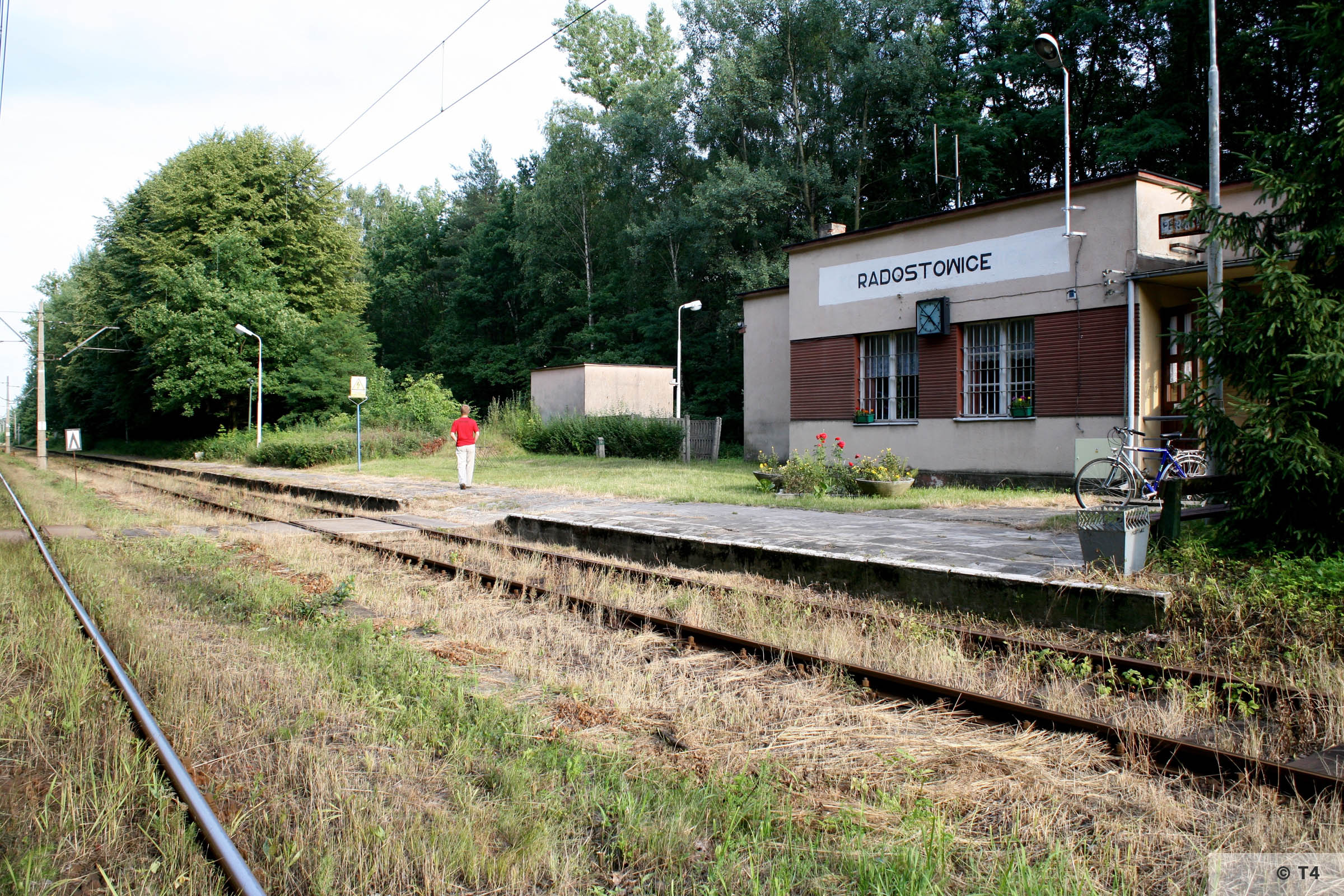 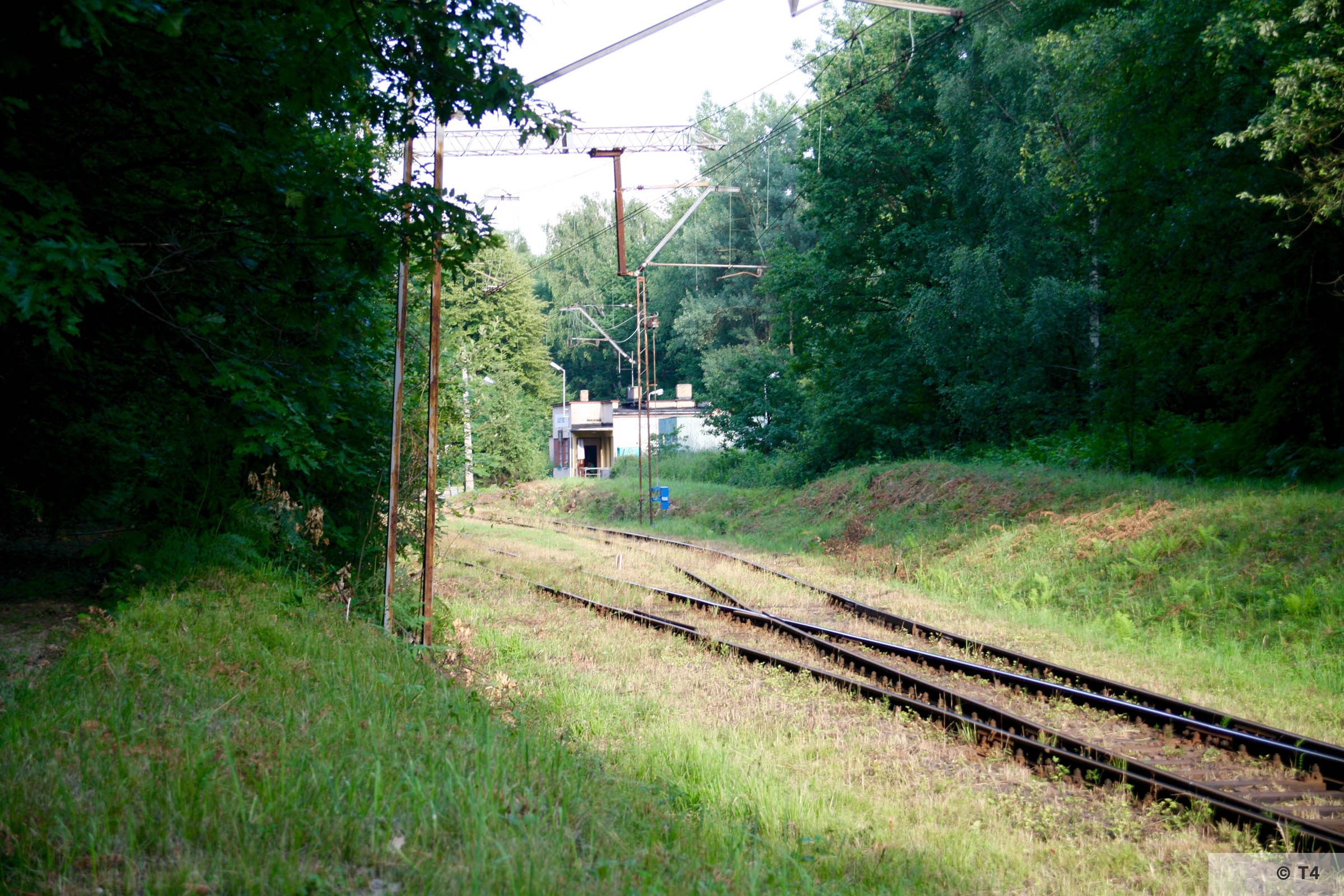 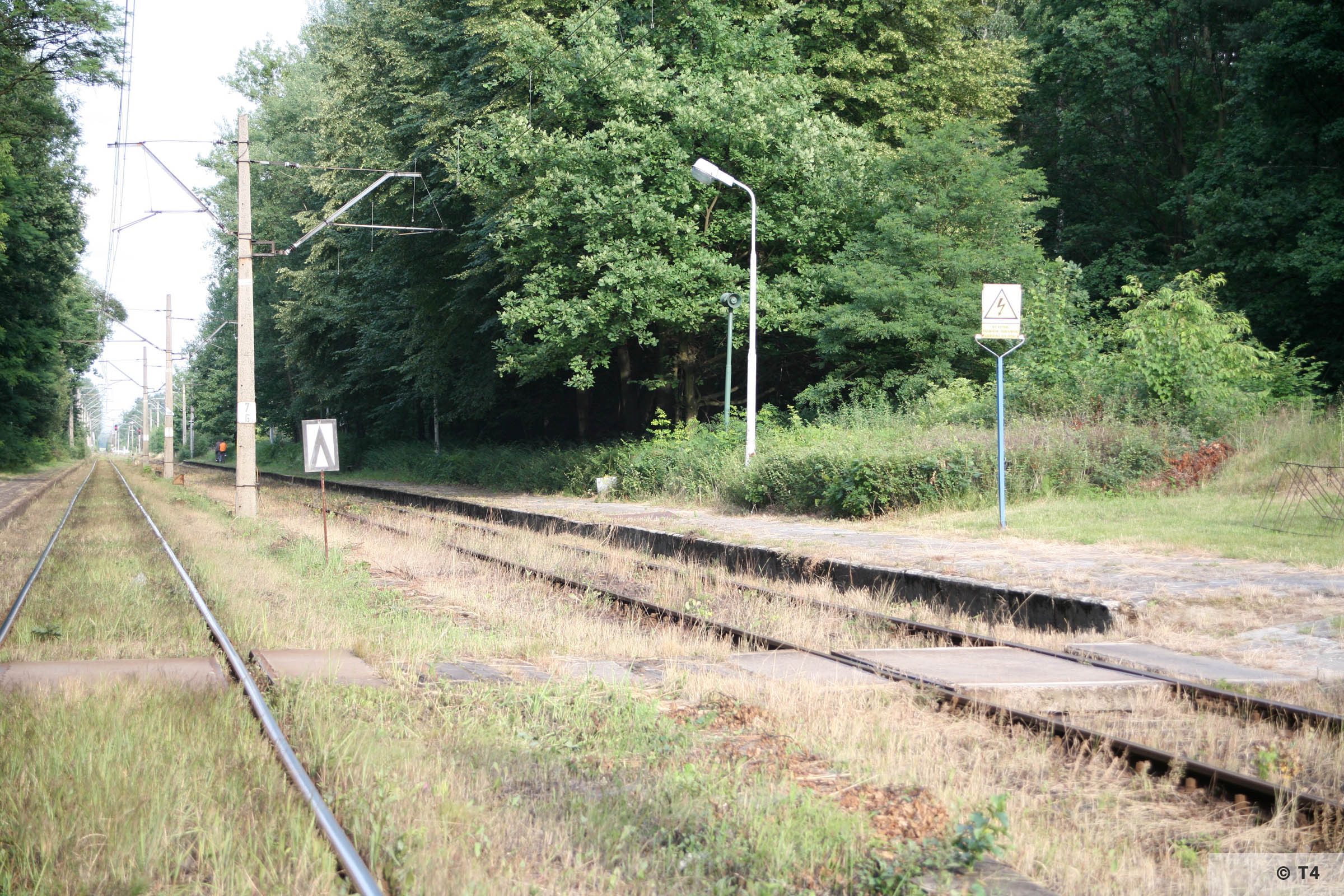 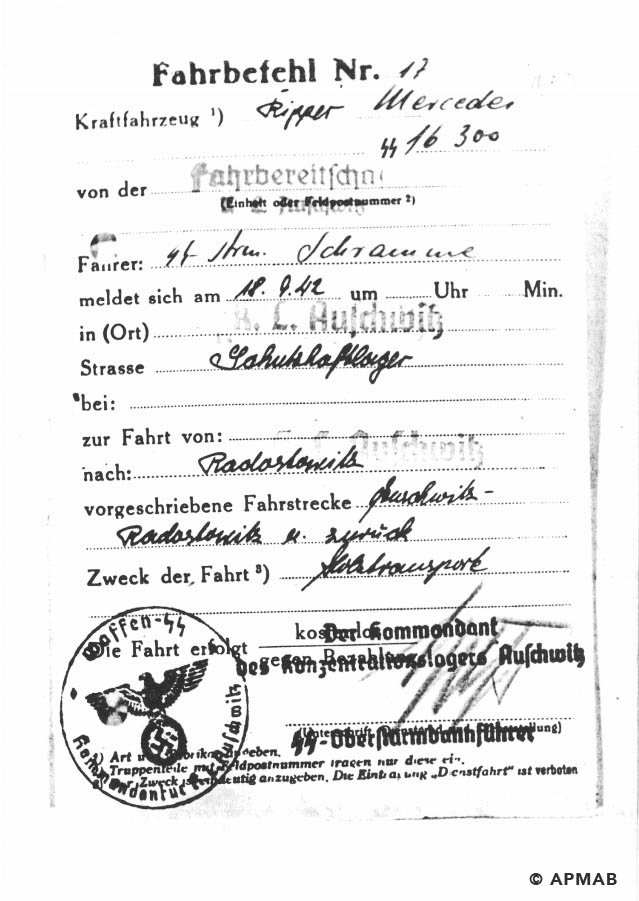 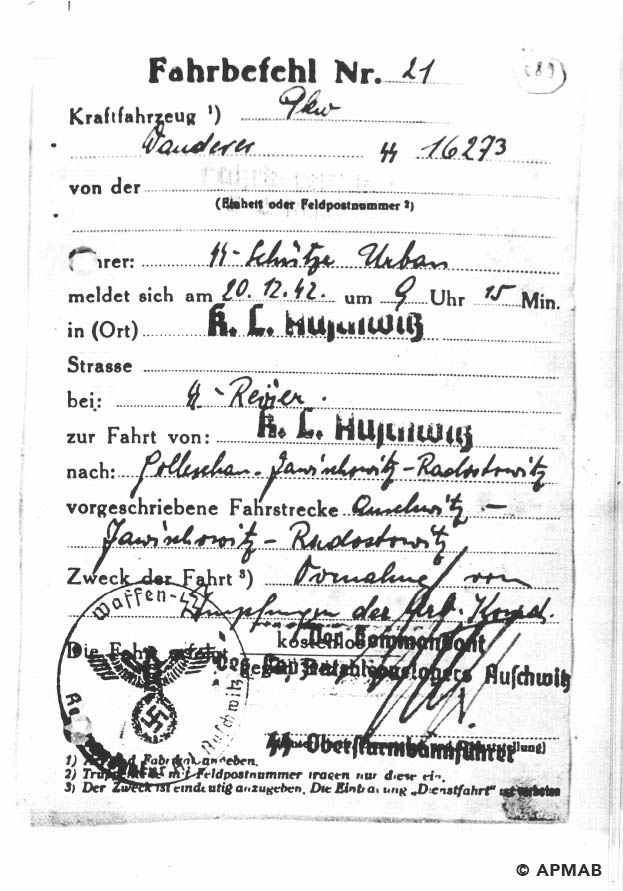