20 to 25 SS men (Estimate from former prisoner testimonies is probably too high). Estimate 10.

Other: Renovation of an office building previously the Central Jewish Communities Headquarters

The prisoners were accommodated in the former Judenrat building which they renovated.

The majority of prisoners were non-Jewish Poles but there were also French and Polish Jews and German prisoners employed as Kapos.

On 19-21 February 1944 the remaining prisoners were transferred to the Lagischa sub camp.

The History of the Building at 12 ul Targowa in Sosnowiec

Sosnowiec, the largest city in the Dąbrowa Basin, had a population of about 125,000 before the outbreak of World War II including approximately 28,000 Jews constituting 22% of the total population. [1]

During the Nazi occupation, the rabbi’s house at ul. Targowa 12 became the seat of the Central Jewish Communities Headquarters, responsible for the Jews in the area of the Dąbrowski Basin and neighbouring Upper Silesia. It was headed by Moses Merin. He oversaw thirty four Jewish communities in East Upper Silesia and was responsible for over 100,000 Jews. As late as 1943 over 30,000 Jews still resided in the region.[3] In June 1943 the Germans made the decision to expel all of the remaining Jews in Upper Silesia and this was completed by August 1943.[4] Most were subsequently murdered. The Central Jewish Communities Headquarters ceased to exist and the building at ul. Targowa 12 was taken over by the by the local Sosnowiec town administration.

[2] Already on the first day of the occupation, all Jews living on ul Ostrogórska and ul Chłodna were shot. From the rabbi’s house on ul Targowa, the pious Jews were gathered, and ordered to run around the city streets with outstretched arms. The next day (September 5, 1939), the Germans ordered hairdressers to shave the beards and heads of all Jews. Finally, on September 9 in the evening, the Germans set fire to the synagogue at 16 ul Dektera, and the following day forced the Jews to clean up the rubble and the site of the fire. Natan Eliasz Szternifinkiel, Zagłada Żydów Sosnowca, Katowice 1946,

The History of the Sub Camp Sosnowitz I

The sub camp Sosnowitz I was created in August 1943 to renovate 12 ul Targowa in Sosnowiec the former Central Jewish Communities Headquarters.

The name Sosnowitz I was not the official name of this sub camp. This designation was given to the sub camp in order to distinguish it from the second Auschwitz sub camp established in Sosnowiec in May 1944 now known as Sosnowitz II. The nomenclature was proposed by the Polish Historian Dr. Franciszek Piper from the Auschwitz-Birkenau State Museum whilst working on the history of the sub camps in Sosnowiec. The designations Sosnowitz I and Sosnowitz II sub camps are the accepted nomenclature in professional literature.[1]

The first time, information about the founding of the sub camp in Sosnowiec appears in surviving camp documentation is August 13, 1943. SS-Untersturmführer Max Selel head of the employment department in Auschwitz sent a memo to the Auschwitz concentration camp administration informing them that in the coming weeks more sub camps would be created, amongst others Sosnowitz for 100 prisoners. It was therefore necessary to undertake the appropriate planning. [2]

This decision was undoubtedly the result of the efforts of the Employment Office (Arbeitseinsatz) in Sosnowiec, the company Reiniers and Dr. Krüger (Oberbereichsleiter NSDAP) from Będzin to secure the employment of Auschwitz prisoners in Sosnowiec.

The prisoners were involved in renovating the former Central Jewish Communities Headquarters in Sosnowiec, converting it into offices. [3]

The prisoners were accommodated in two of the rooms of the former Central Jewish Communities Headquarters and the SS guards in other rooms. Inside the building at work the prisoners were overseen by civilian workers. The SS guarded the outside of the building. [4] One of the civilian workers helped the prisoners,“I worked on the installation of the switchboard, together with other prisoners, supervised by a civilian, an engineer from Aachen, whose name I cannot remember. This engineer treated us very benevolently and was even ready, through him to secretly send letters from prisoners, including me to our families. After some time came the Gestapo to the switchboard where we and the engineer worked…” The engineer managed to explain away the fact that a letter had been received in the General Government from a prisoner in Sosnowice. [5]

The majority of prisoners were non-Jewish Poles but there were also French and Polish Jews and German prisoners employed as Kapos. [6]

There was no facilities for the ill and sick prisoners; they were transported back to Monowitz. [7] Roll calls were held in a courtyard measuring 20 by 30 meters at the rear of the building. [8]

By December 1943, renovation works in the building at ul Targowa were already advanced enough that it was unreasonable to keep such a large number of prisoners there. Consequently, it was decided to transfer half of the prisoners to the newly established Lagischa sub camp in Będzin-Łagisza.

By February 1944, the prisoners had finished the renovation works and it was decided to dissolve the sub camp. The remaining prisoners, as with the previous group who had left Sosnowitz I, were transferred to the Lagischa sub camp between February 19-21 1944. [9]

[9] These dates were calculated by Dr. Franciszek Piper from the Auschwitz-Birkenau State Museum on the basis of an analysis of the files of Mauthausen concentration camp prisoners.

The first Lagerführer was SS-Rottenführer (?) Lehman. He was stripped of his position because of drunkenness [1] and replaced by SS-Unterscharführer Horst Czerwinski who had previously been the Postenführer in the sub camp. The SS guard unit was made up of around 20 to 25 SS men. [2] Horst Czerwinski was sentenced on 26 May 1989 to life imprisonment for crimes committed at the Auschwitz sub camp Lagischa.[3]

According to the former prisoner Stanislaw Lapinksi, Czerwinski treated the prisoners well. They were not beaten, and once when one of the Kapos, Linek beat a prisoner, Czerwinski beat the Kapo. [4] There were two Kapos in the sub camp, the Austrian Linek, and Rudolf Nawratil from Graz, who were both criminal prisoners. [5]

The former Central Jewish Communities Headquarters building still stands on the corner of ul Targowa and ul Modrzejewska. It is currently a residential building.

The building is still standing on the corner of ul Targowa and ul Modrzejewska. It is currently a residential building. Tiergartenstrasse4Association did not carry out any inspections inside the building.

As far as we are aware the Auschwitz-Birkenau State Museum had not visited the site of the former sub camp at 12 ul Targowa.

Topography of the Sub Camp Sosnowitz I 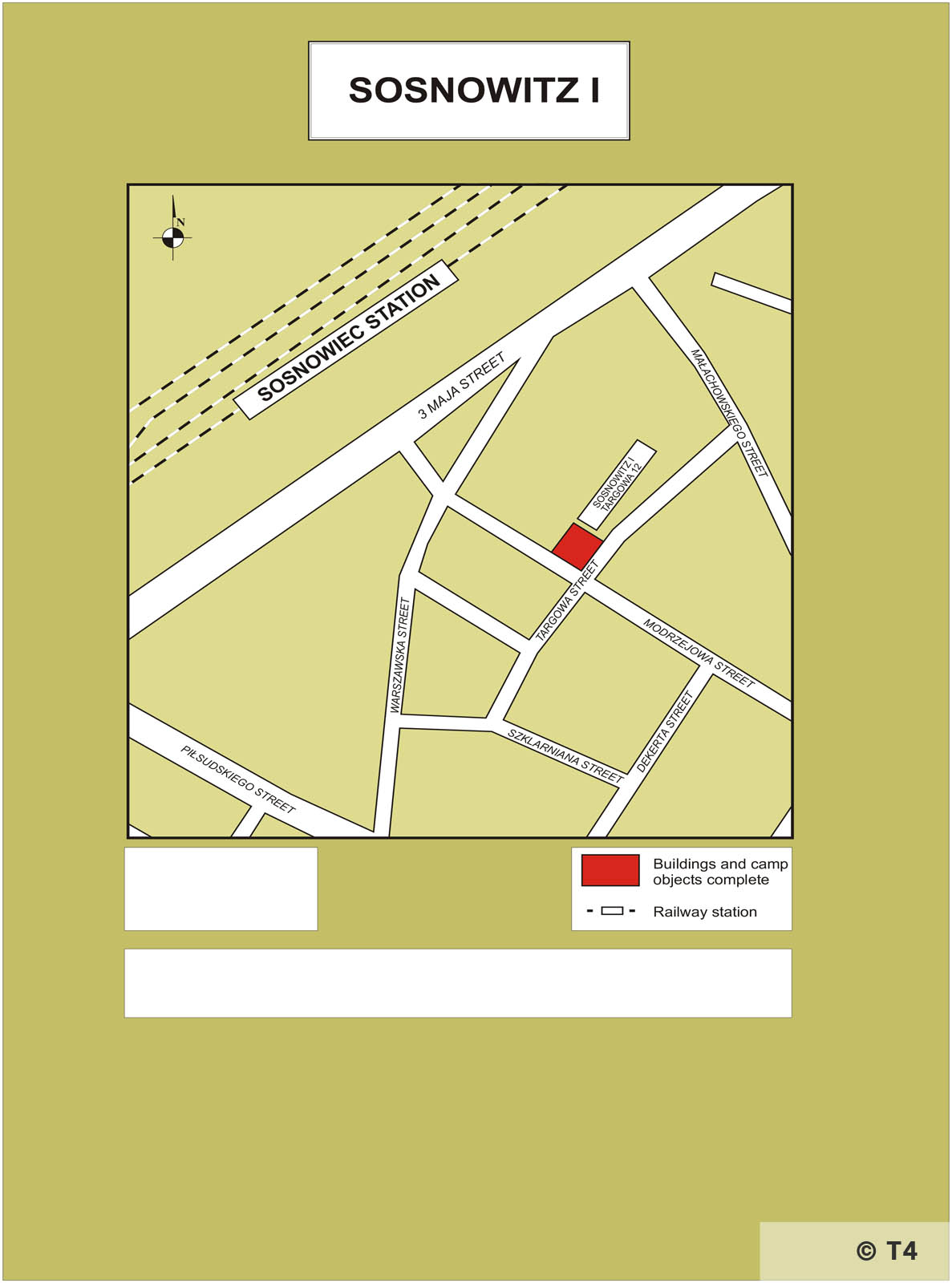 Location of the Sub Camp Sosnowitz I 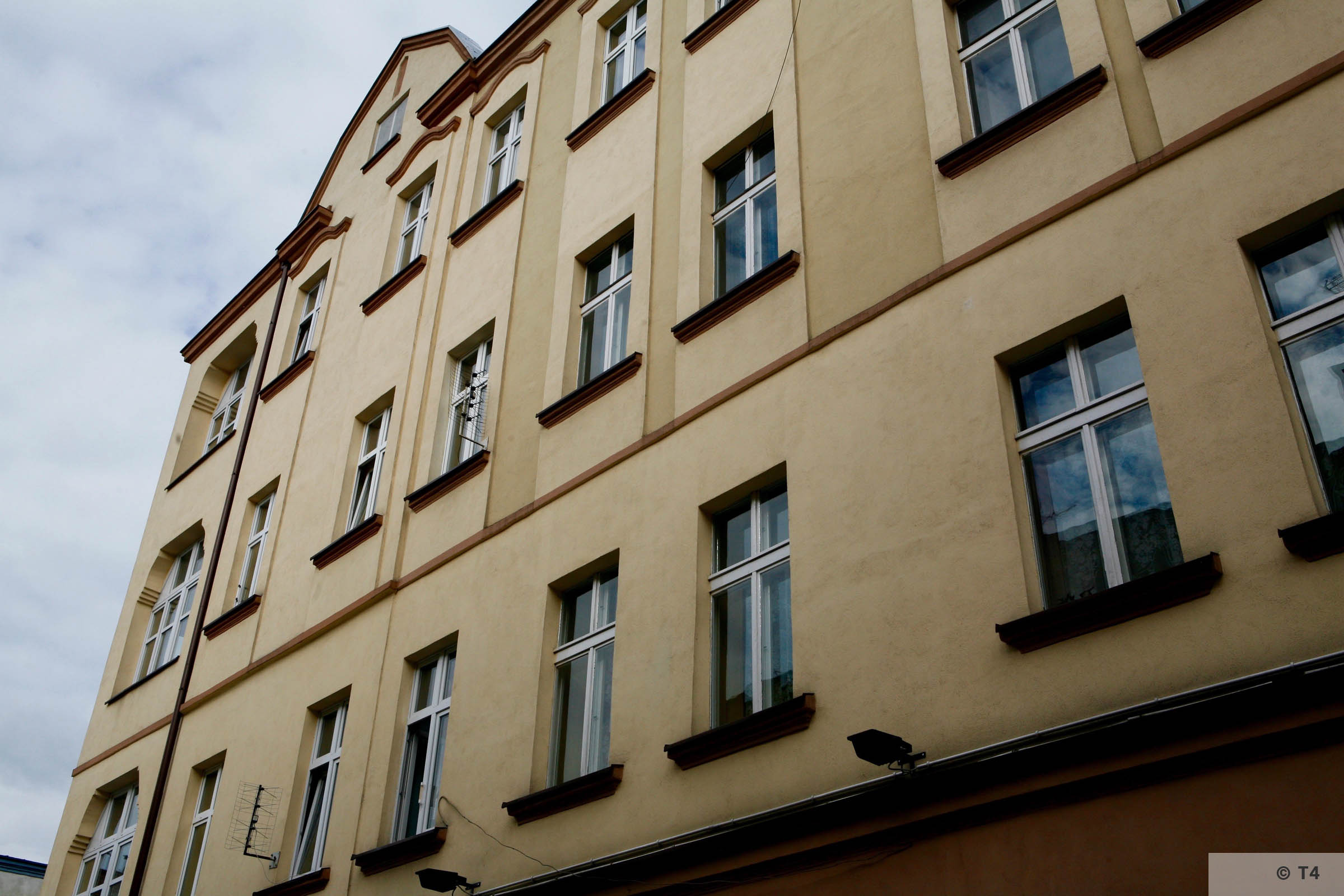 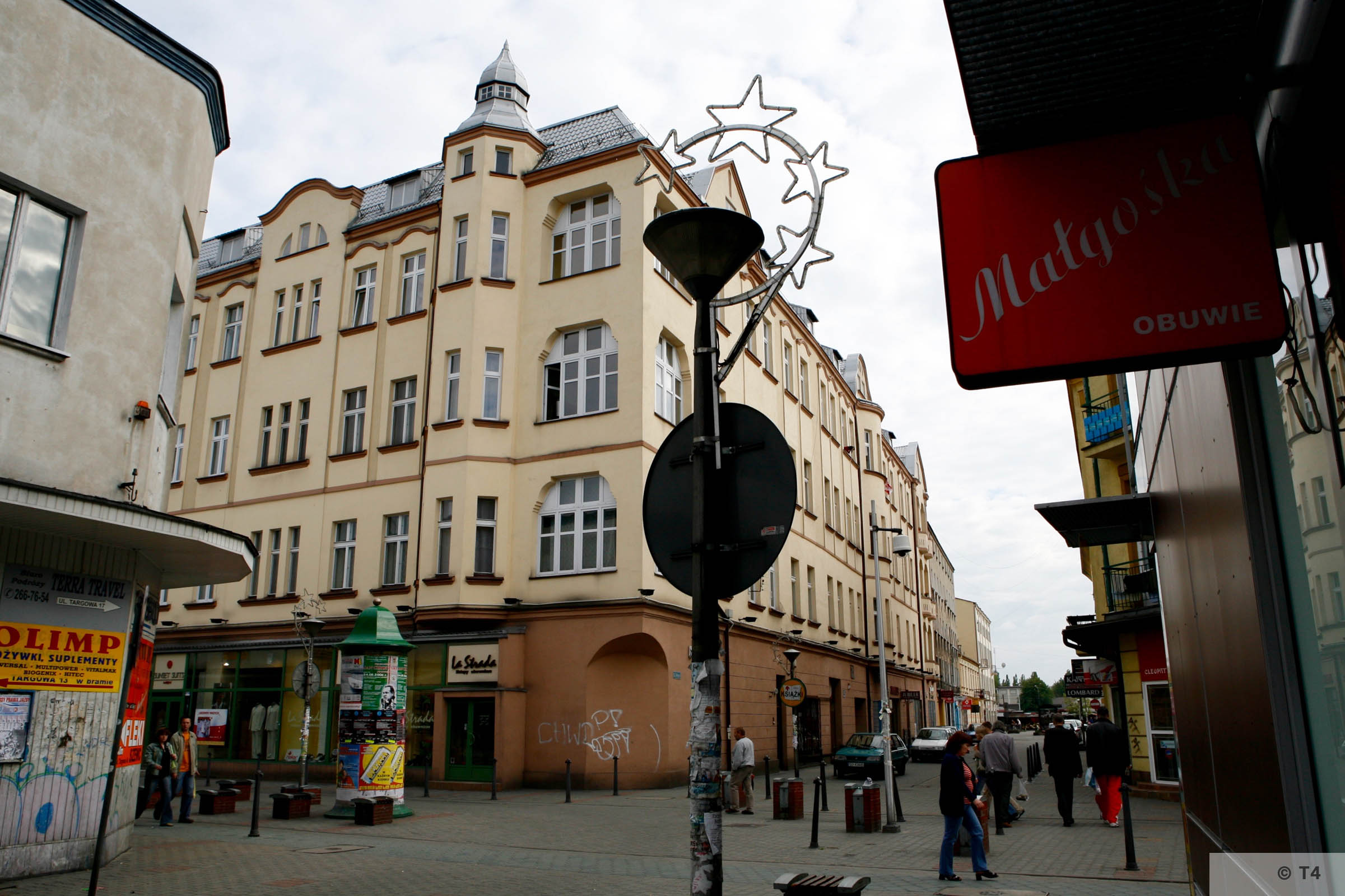 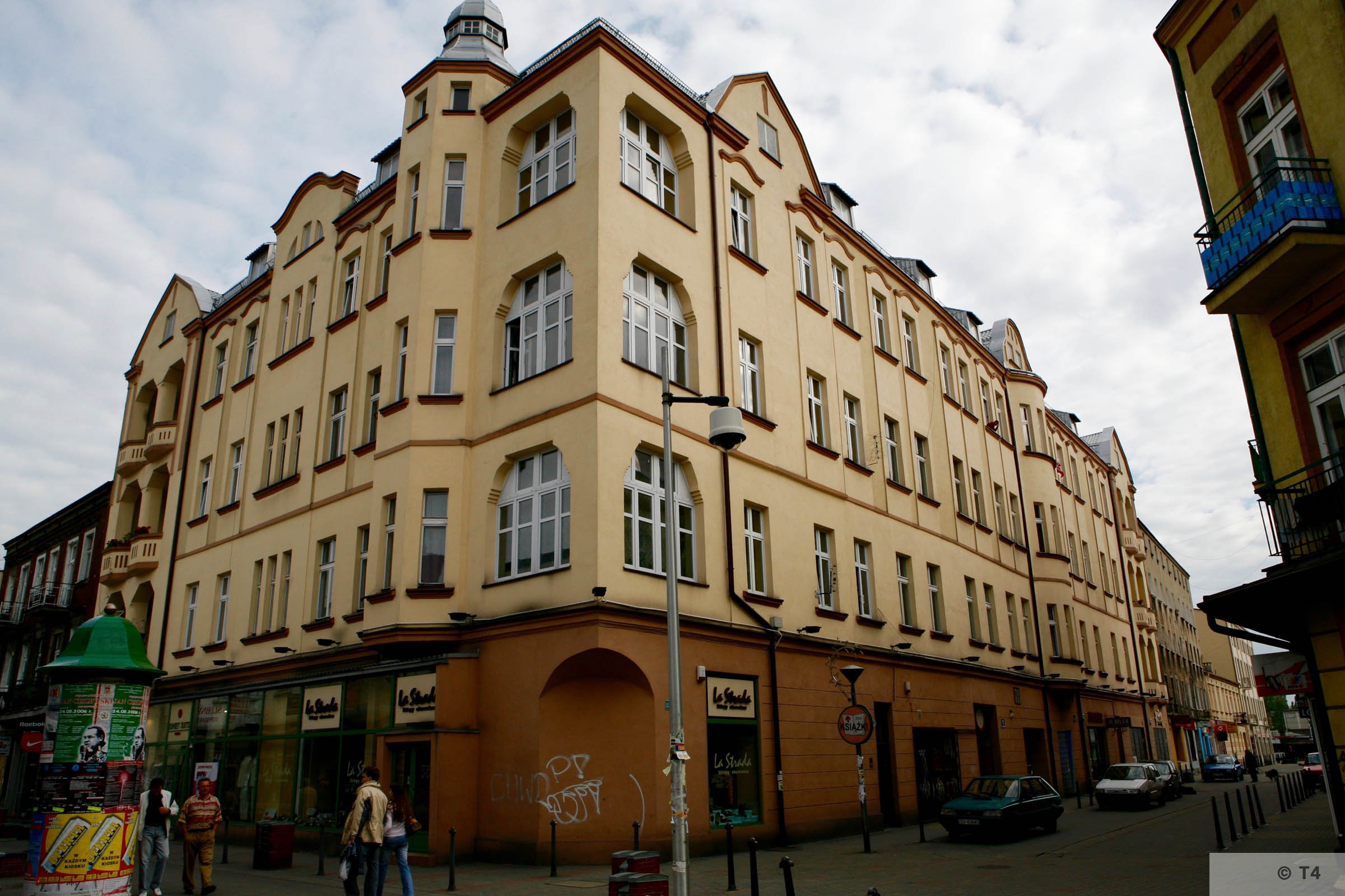 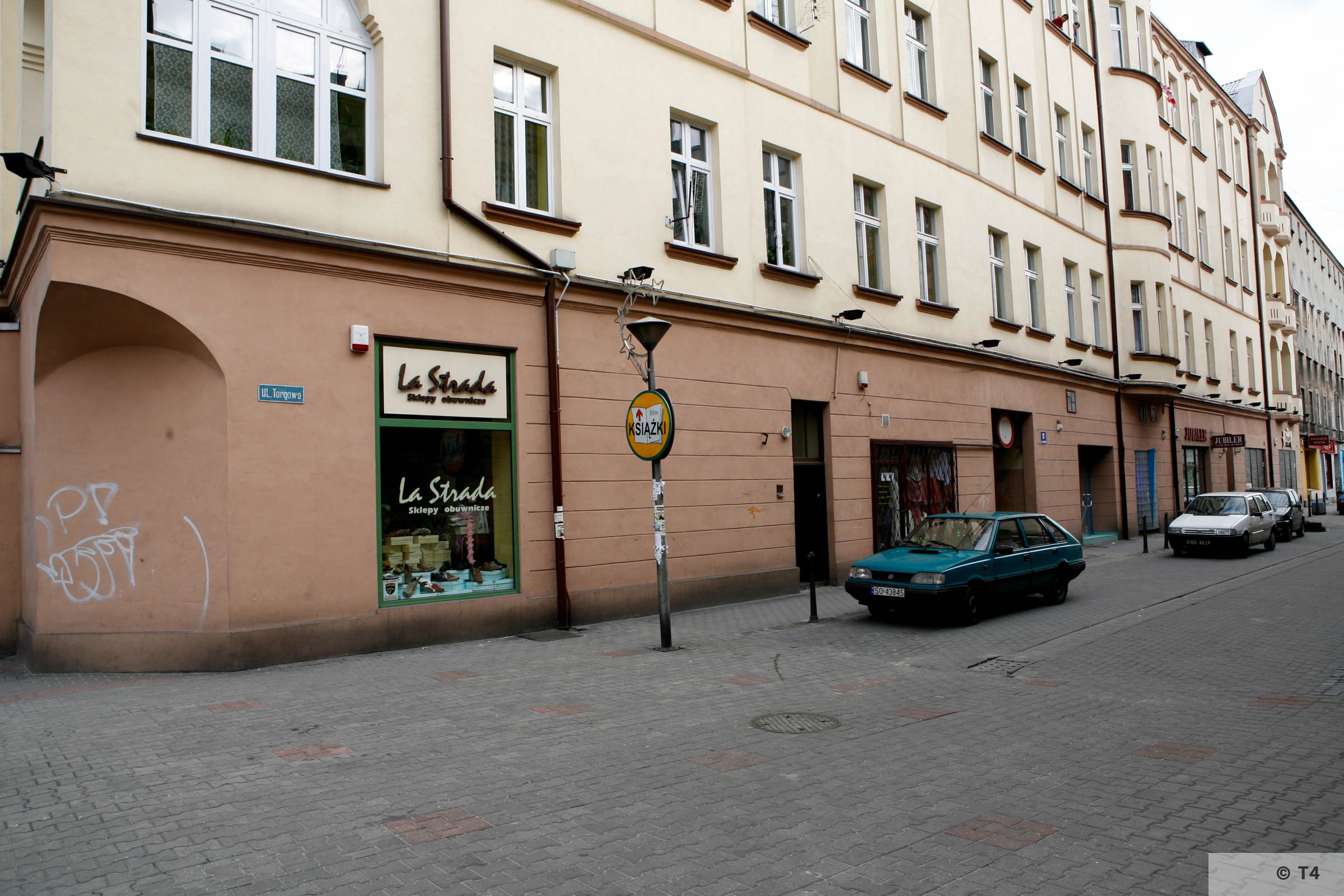 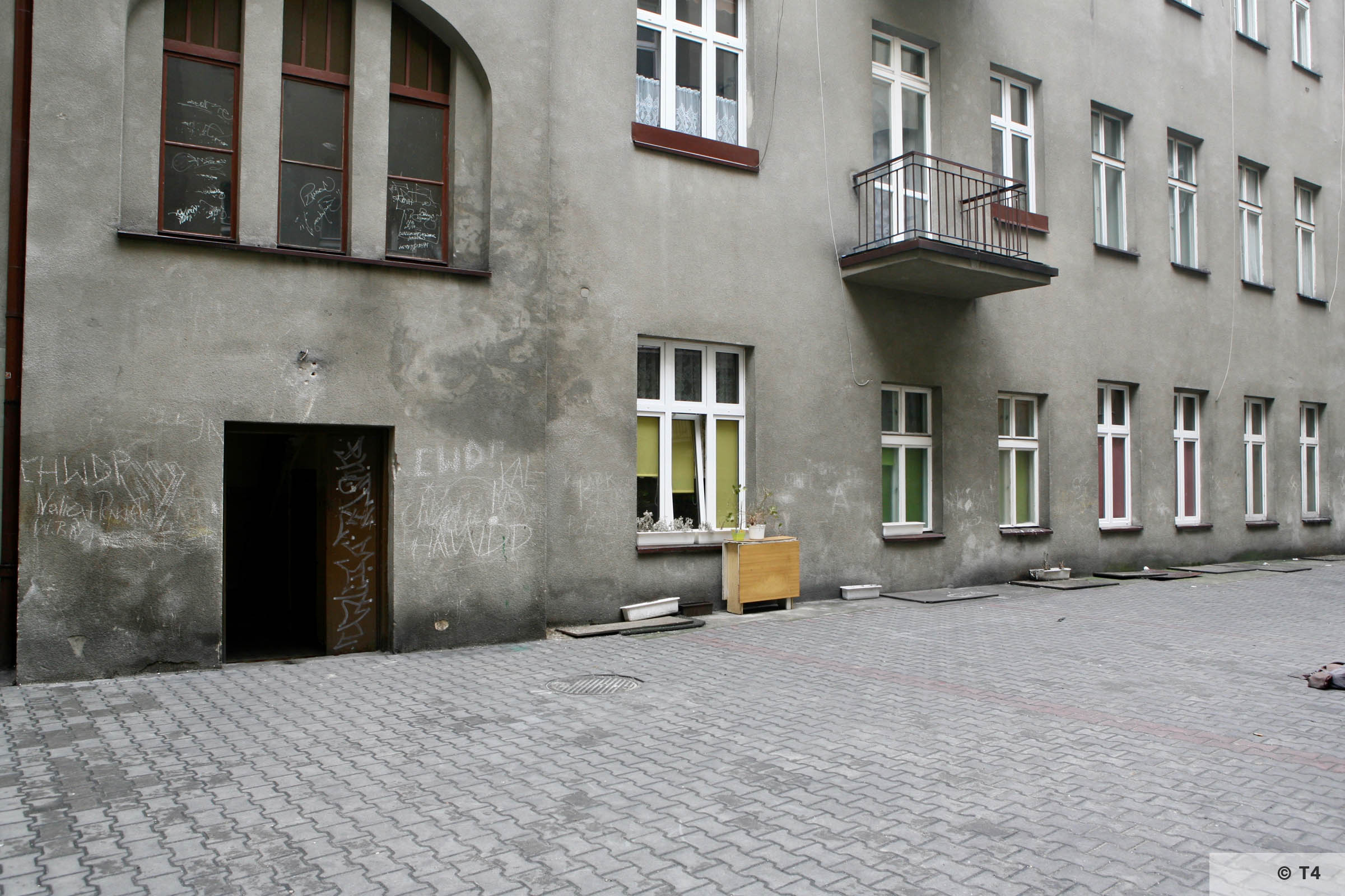 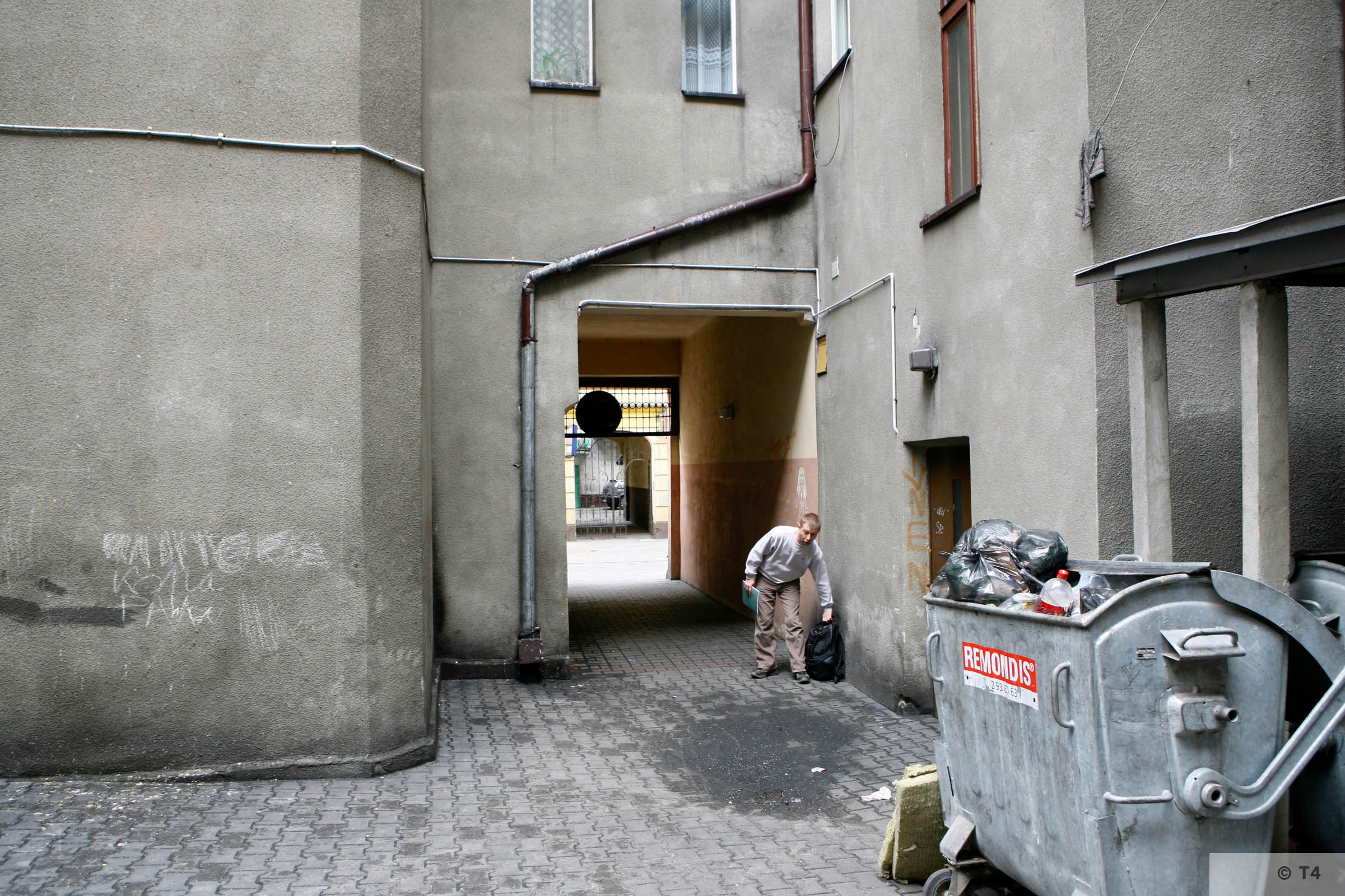 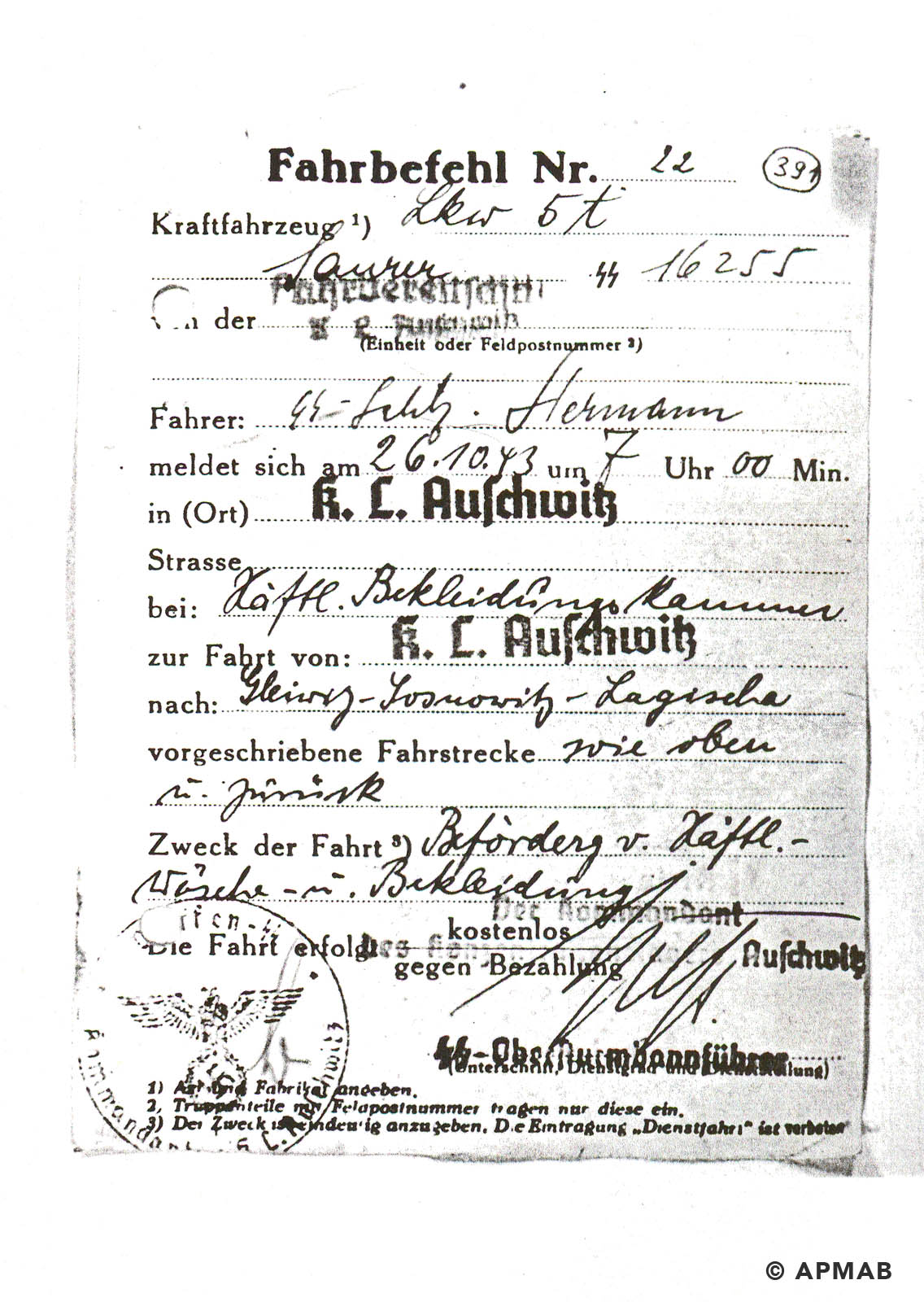