The Guard unit consisted of local German police. The only SS man from Auschwitz was the Lagerführer. Estimated 20 in 1943 and 5 in 1945.

The prisoners were accommodated on one floor of the Technische Akademie der SS und Polizei.

Of the original 251 prisoners, most were Poles from Warsaw, Krakow, Lublin, Poznań and other concentration camps.

The unfinished building of the Technische Akademie der SS und Polizei was designed before the war as a seminary. It was taken over by the SS on the occupation of Czechoslovakia.

Today, the former building of the SS and Police Technical Academy is the Biskupská Gymnasium Brno (Episcopal High School in Brno) while a part is also a radio station.

The History of Sub Camp Brünn

Brünn was the sub camp located furthest away from the main Auschwitz camp at about a distance of 210 km, in the Czech city of Brno.

It is not known exactly who initiated the creation of sub camp Brünn. Some clues are given by Auschwitz concentration camp commandant Rudolf Höss, when he testified: “Camp Brünn (Czechoslovakia) was founded to expand the police academy. It had about 100 prisoners. I do not remember who the Kommandoführer was.” [1]

Based on the testimonies of former prisoners the sub camp Brünn was probably established in late September or October 1943. In late September 1943 in Auschwitz I, some prisoners were brought to Block 8 for a week’s quarantine. Most of them were convinced that they would be transferred to another camp; only a few of them knew that they would be transported to Czechoslovakia. [2]

On September 30, 1943, 251 prisoners from quarantine in Block 8 were taken to the camp bathhouse, where, after bathing and disinfection they received new clothes, leather shoes, two blankets, a bowl and utensils for eating. In addition, each of them received a loaf of bread, a cube of margarine, sausages and a portion of a bottle or a mess-tin of coffee. [3]

The building was unfinished and had been built before the war for use as a seminary. It had a main entrance building and two side wings. The area around the building was surrounded by a high wooden fence hung with barbed wire and wooden guard towers.

In the sub camp Brünn were originally 251 prisoners, most of whom were Poles from Warsaw, Krakow, Lublin, Poznań and concentration camps.

They were quartered in the halls on the second floor of a wing of the  building, where the windows were barred. The rooms contained metal beds with mattresses and blankets. The prisoners did not have to share bunks. On the same floor there were also baths with showers and toilets. The accommodation and conditions were much better than at the main Auschwitz camps.

However, the prisoners complained about the food, which was of poor quality and delivered in small quantities; they suffered from severe hunger. Józef Kołodziejak a former prisoner testified: “The food was very bad consisting of potatoes. Also, we were given a packed lunch of bread and margarine. Where the food came from I do not know, at least in our accommodation there was no store of food or a kitchen. Meals we received three times a day. Morning coffee and a portion of about 300 grams of bread, soup at noon – mostly water with a little overcooked turnips, turnip or other weeds and in the evening sometimes the soup and a slice of bread. Those who received some soup last – had the opportunity to obtain from the bottom thicker portions of the soup than could be taken at the beginning – who received basically water. Sometimes, but these were rare occasions, there was thicker soup with noodles and peas. After a few days stay in Brno I began to feel hungry and so it was until my departure. The civilian workers working with us did not provide any help and it was not possible to acquire food in any other way (…). One day the foreman from Czechoslovakia, watching us work at the cement mixer, brought a few loaves of bread and each of us took one. We started to move the bread to our living accommodation. When I carried my bread, Palitzsch met me in the hallway, near which on the floor lay a few loaves of bread, which had been taken away from my friends. Palitzsch stopped me and asked where I got the bread. I replied that everyone working on the cement mixer got bread from the supervisor. He let me keep the bread because I had told the truth. The rest of the prisoners lied as to where they had got the bread from and their bread was taken.” [4]

Prisoners worked mainly on finishing the building. They were divided into separate work groups based on their specializations. Working groups were set up for: carpenters, masons, glaziers, locksmiths, painters and electricians. In addition, there were gangs of unskilled laborers who performed work in the grounds around the academy building.

After two months on 1 December 1943, 100 mostly sick and exhausted prisoners were transferred back to Auschwitz. They were subsequently transferred to the Auschwitz sub camp Jawischowitz.

Another group of about 100 prisoners were transported back to Monowitz on May 1, 1944.

In Brno remained between 28 and 36 prisoners who were transferred to a wooden barrack outside of the main academy building. These prisoners performed a variety of finishing and cleaning tasks in the academy building, until the liberation.

The guards of the Brünn sub camp were officials from the local German police. Only the Lagerführer of the sub camp was  assigned from the Auschwitz garrison.

From the establishment of the sub camp until the beginning of November 1943 SS-Hauptscharführer Gerhard Palitzsch was the Lagerführer. He attached great importance to the organisation and discipline of the sub camp. He often organised inspections of the prisoner accommodation, their personal hygiene, their clothes and also their personal items – bowls, etc. Usually, Palitzsch undertook his review on Sunday mornings and the prisoners had to gather for the roll call at 6.00 hrs, while Palitzsch usually didn’t arrive until 11.00 hrs. During this time the prisoners were not allowed to leave the roll call square.

Palitzsch was accused of “Race Defilement” and theft and was arrested, and sent back to Auschwitz. He was incarcerated in Block 11 and sentenced to death, but was reprieved and instead sent to a penal unit.

The Evacuation of the Sub Camp Brünn

Preparations for the evacuation of the subcamp Brünn began in late April 1945. Jan Hyla a former prisoner gave testimony on these preparations and the evacuation after the war: “First we had to dismantle all the equipment (machines) which we loaded onto the trucks, which were taken to the train station. There they were loaded onto wagons. When we were finished with this, we were also loaded onto wagons. The journey lasted quite a long time. During the air raids which took place on route, the SS men in such moments, jumped out of their cars and hid in ditches- their weapons trained pointing towards the wagons. We were not allowed to leave the wagons. During the journey a prisoner named Olszewski died. In Brno, he held the position Schreiber (…). on the transport there were about 30 prisoners. The rest had earlier been deported to the camp of Monowice (Monowitz). The evacuation train stopped in Bergen (upper Bavaria at the foot of the Alps), near Traunstein. It was probably on May 1, 1945. For two days we unloaded the train and trucks and delivered (the machines and equipment) to the factory in Bergen (this factory had a foundry and other workshops)…..There was no time for proper segregation and security. This work was not completed. On May 3, 1945, we learned that we would be shot. This order was received by an SS man who came with us from Brno – and who was part of the SS guard in Auschwitz concentration camp. When the prisoners of Germany learned about it, they went to him (I do not remember his name), asking him to at least spare them as Germans…” [1]

The Post War History of the Former Sub Camp Brünn

Today, the former building of the SS and Police Technical Academy is the Biskupskę Gymnasium Brno (Episcopal High School in Brno) and a part is also a radio station.

The Preservation Status of the Former Sub Camp Brünn

The former sub camp Brünn is located on a hill between two streets, Rezkova street and Barvičowa in Brno. The main building of the former SS and Police Technical Academy has four floors (ground, first, second and third) and the two wings of the building have three floors (ground, first and second). From Barvičova street you can see a high tower, which resembles a bell tower. Perhaps this tower survived from the original building which was intended for use as a seminary.

As already indicated the prisoners not only worked but also lived in the building. A room on the second floor of one of the wings was adapted for their use. Unfortunately, we failed to determine in which wing of the building the prisoners lived. In spite of modernization the building retains its original shape.

Today, the former building of the SS and Police Technical Academy is the Biskupská Gymnasium Brno (Episcopal High School in Brno) and a part is also a radio station. In the vicinity there is no information in the form of a bulletin board, memorial, or plaque that indicates the existence here of a sub camp of Auschwitz.

The other place associated with the sub camp Brünn is the railway station in Brno, where on one side of the tracks stopped the convoys of prisoners from Auschwitz.

In the Auschwitz-Birkenau State Museum archive there are a series of photographs of prisoners at work taken during the existence of the sub camp:

There are also a series of photographs of the prisoners of the sub camp Brünn after liberation:

Topography of the Sub Camp Brünn

Location of the Sub Camp Brünn 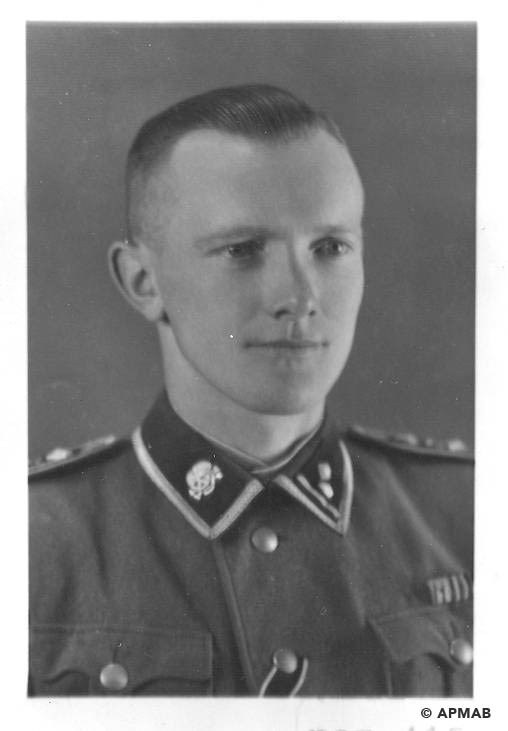 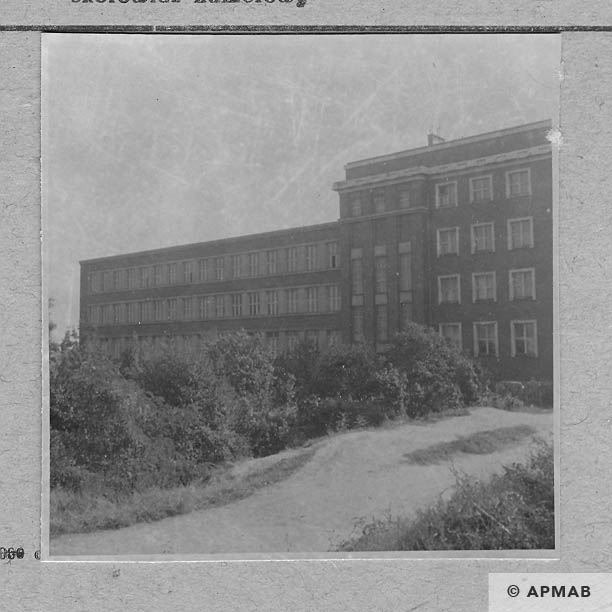 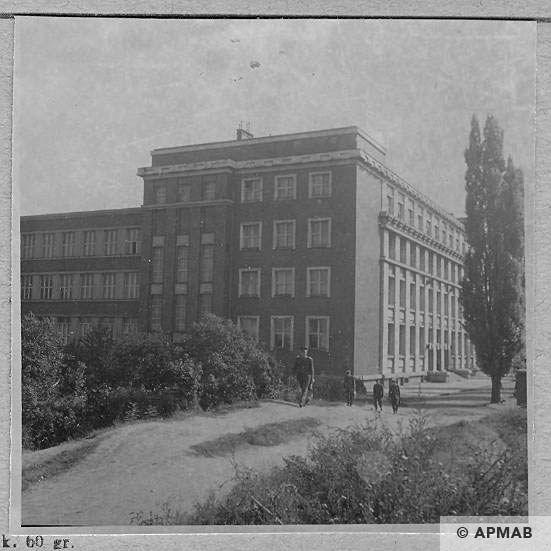 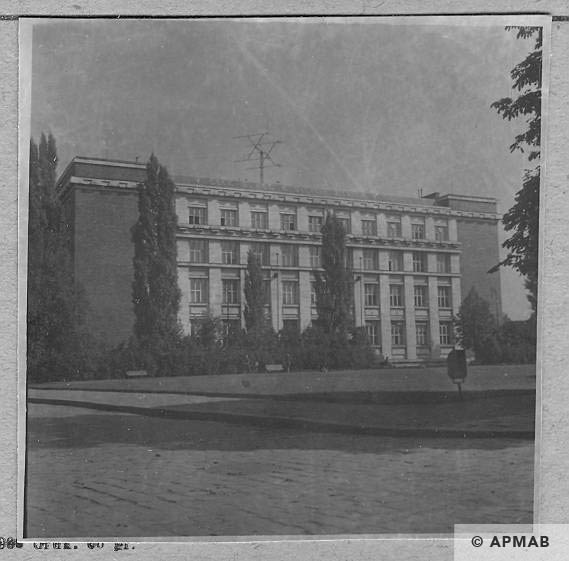 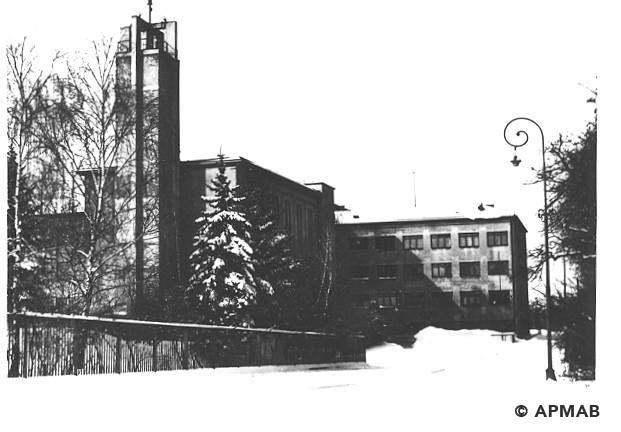 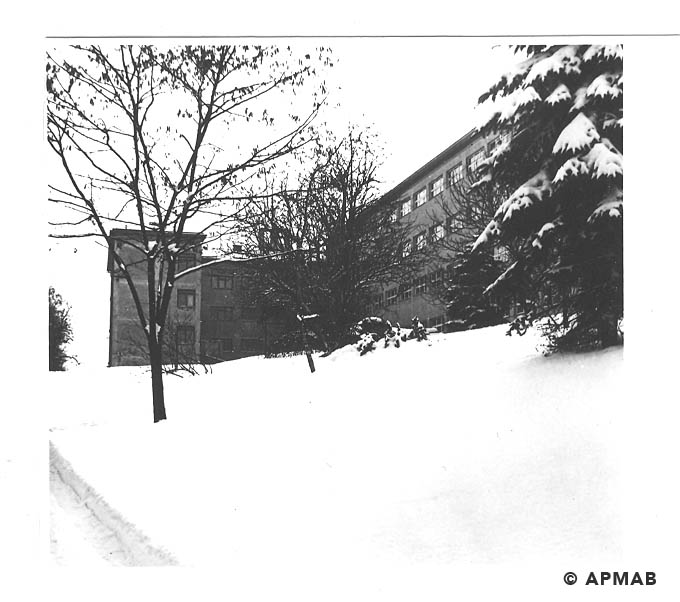 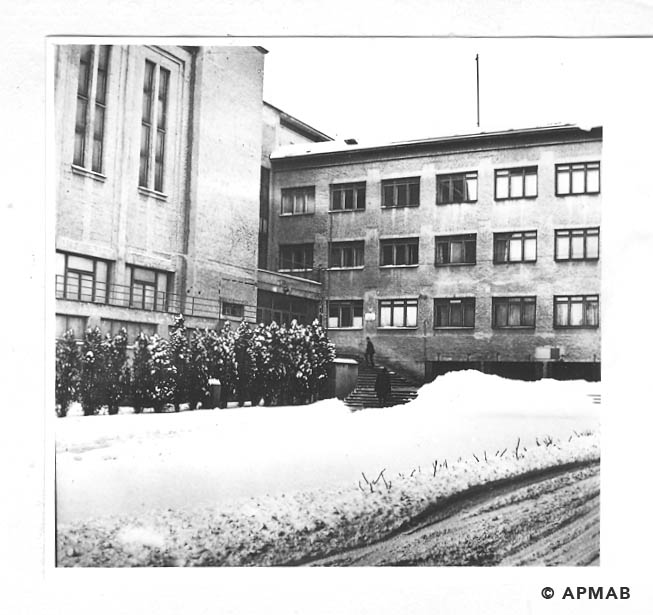 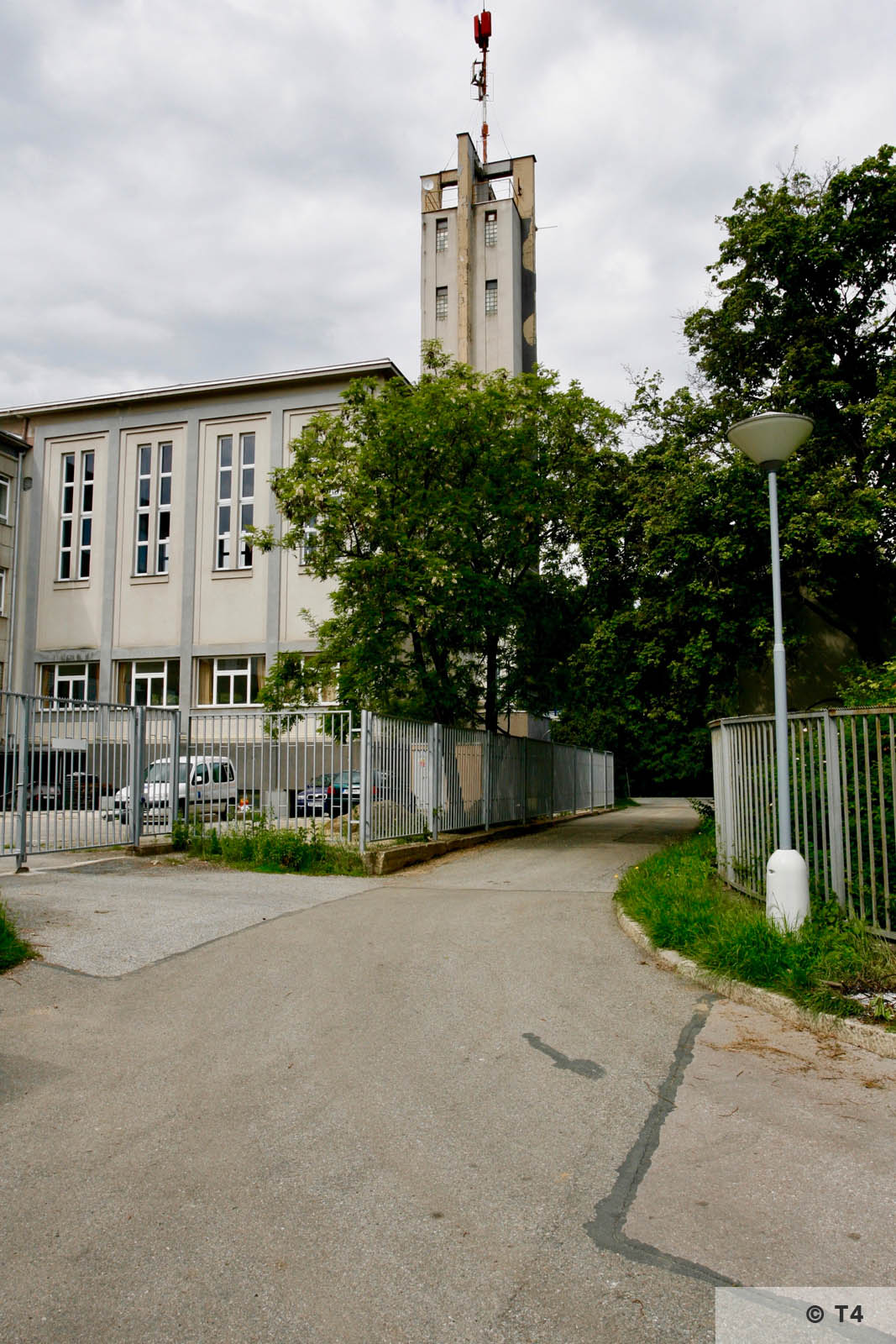 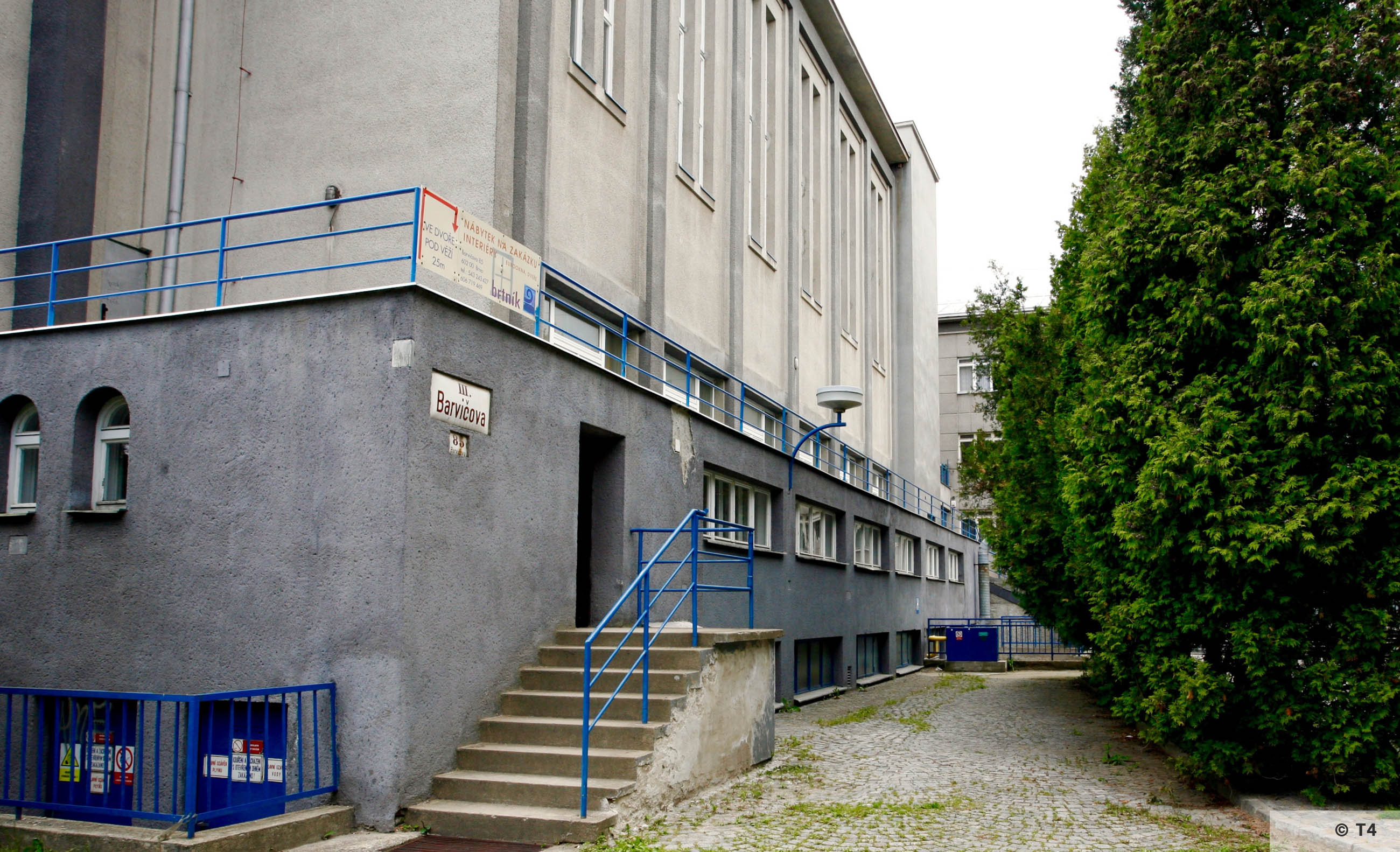 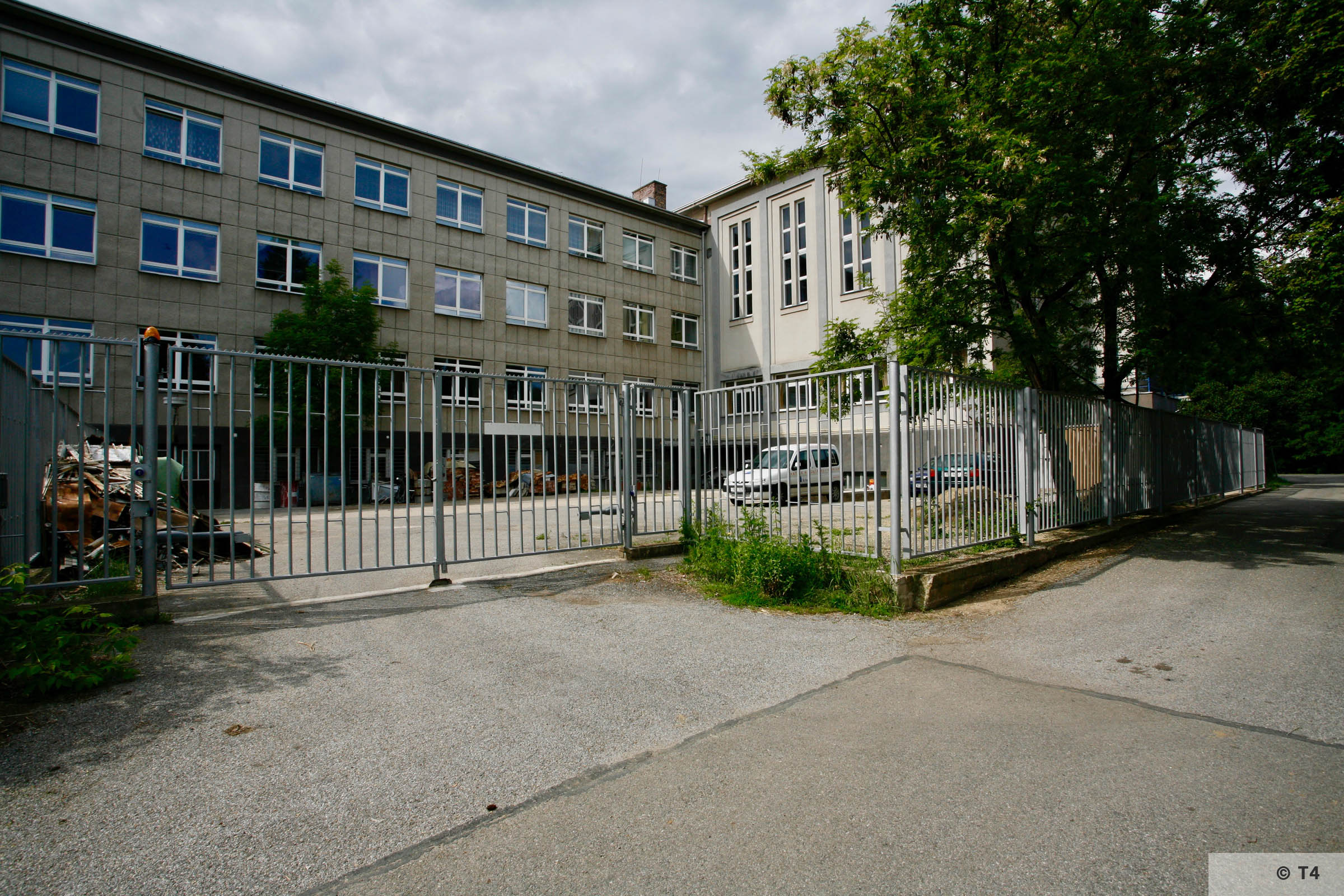 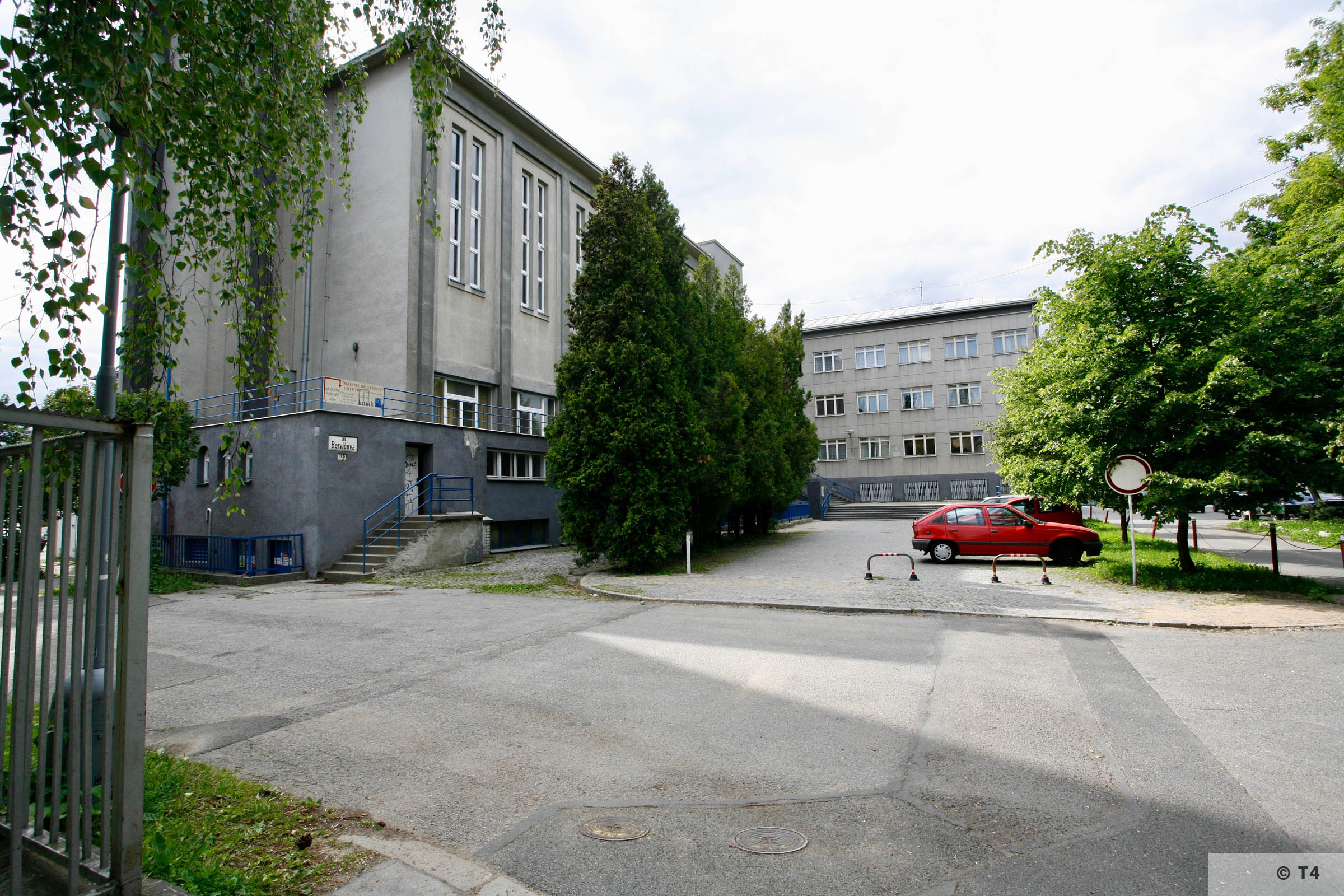 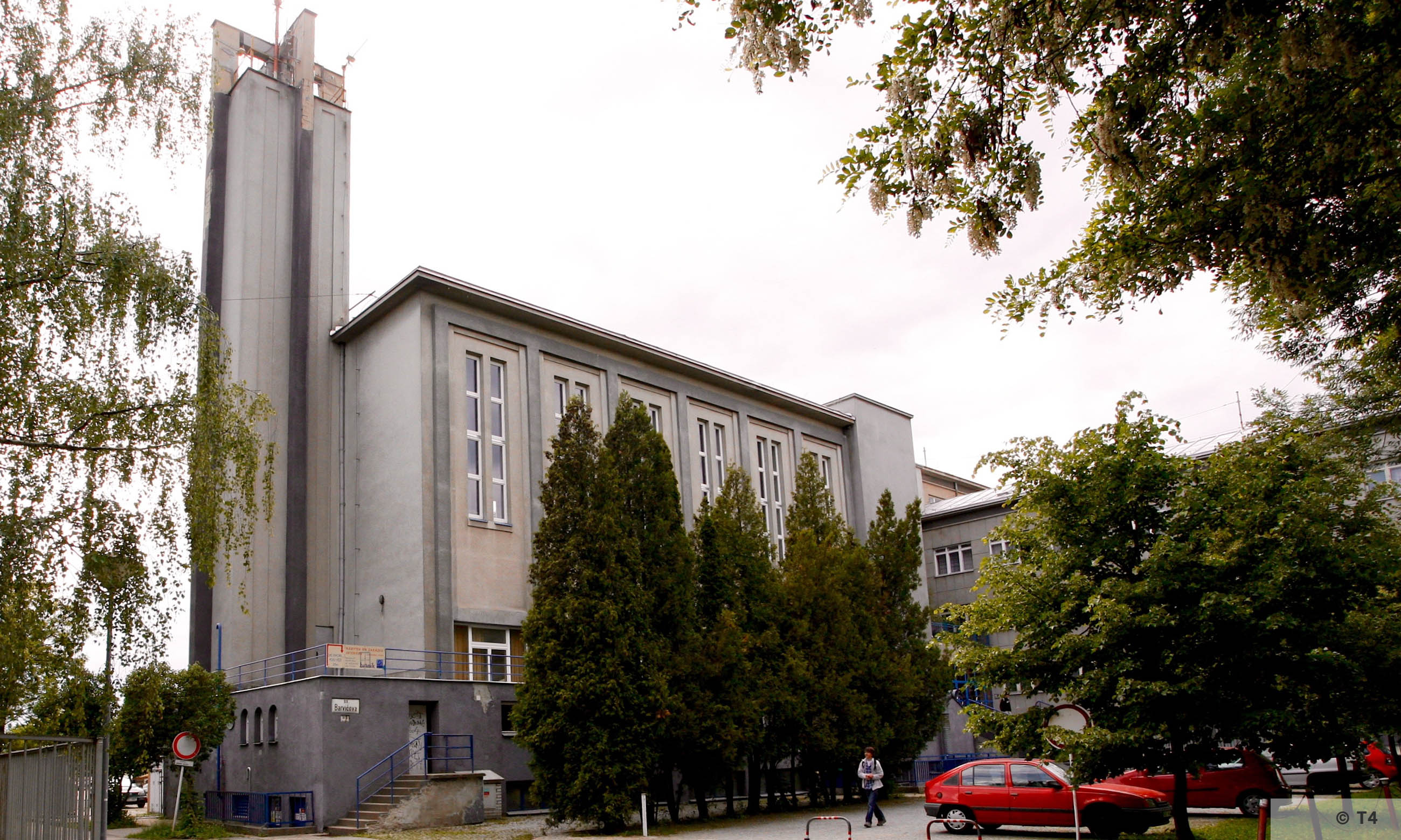 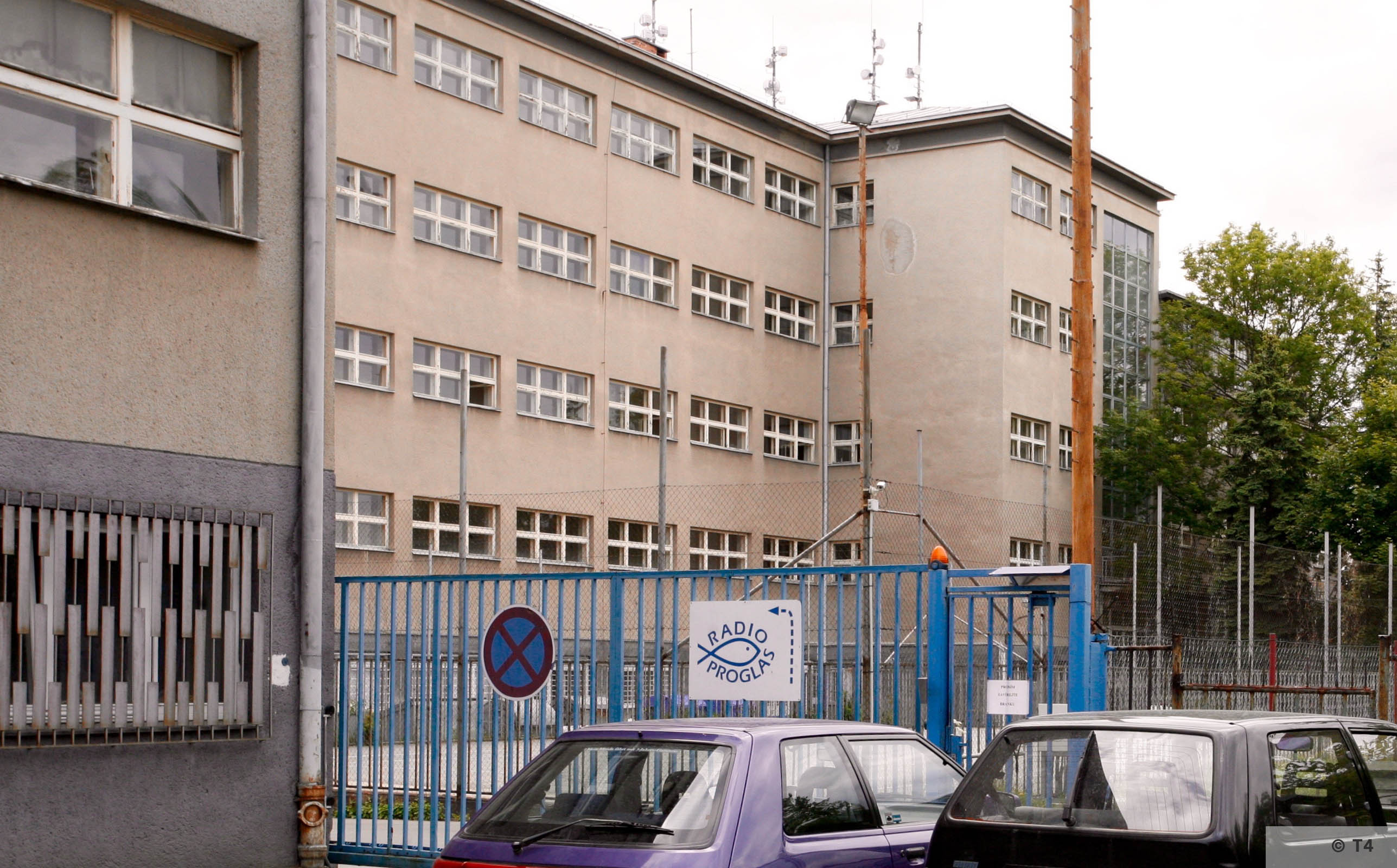 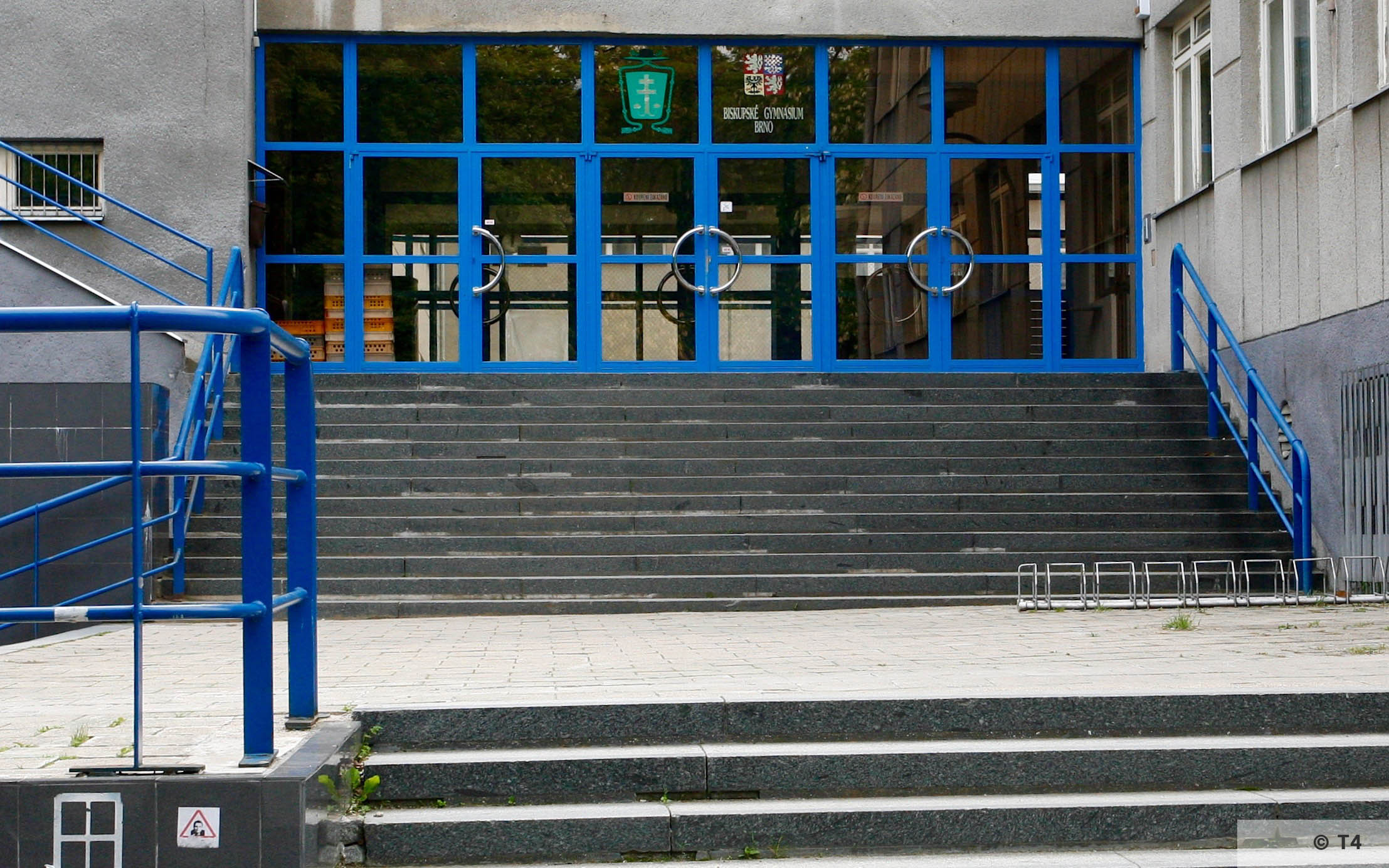 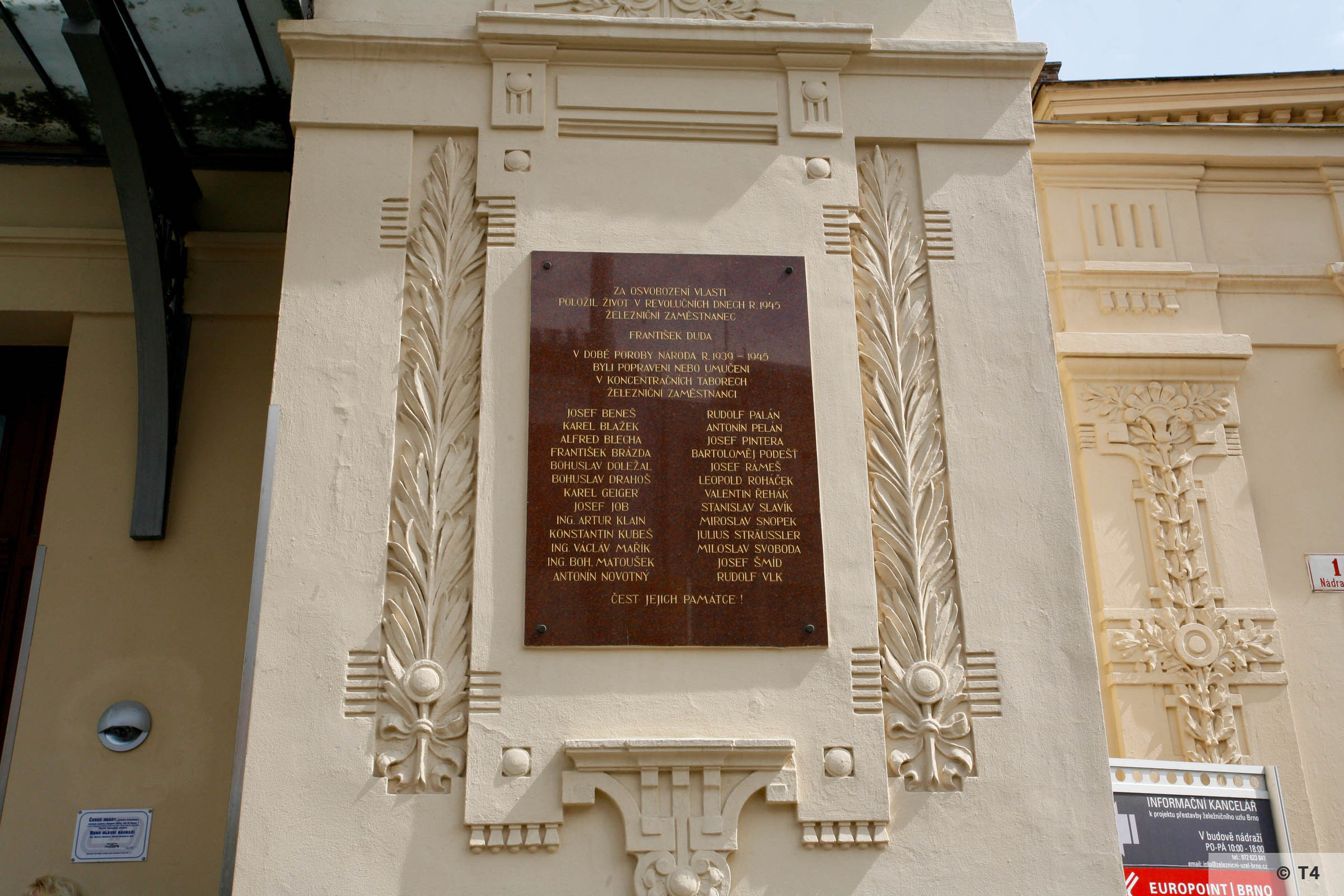 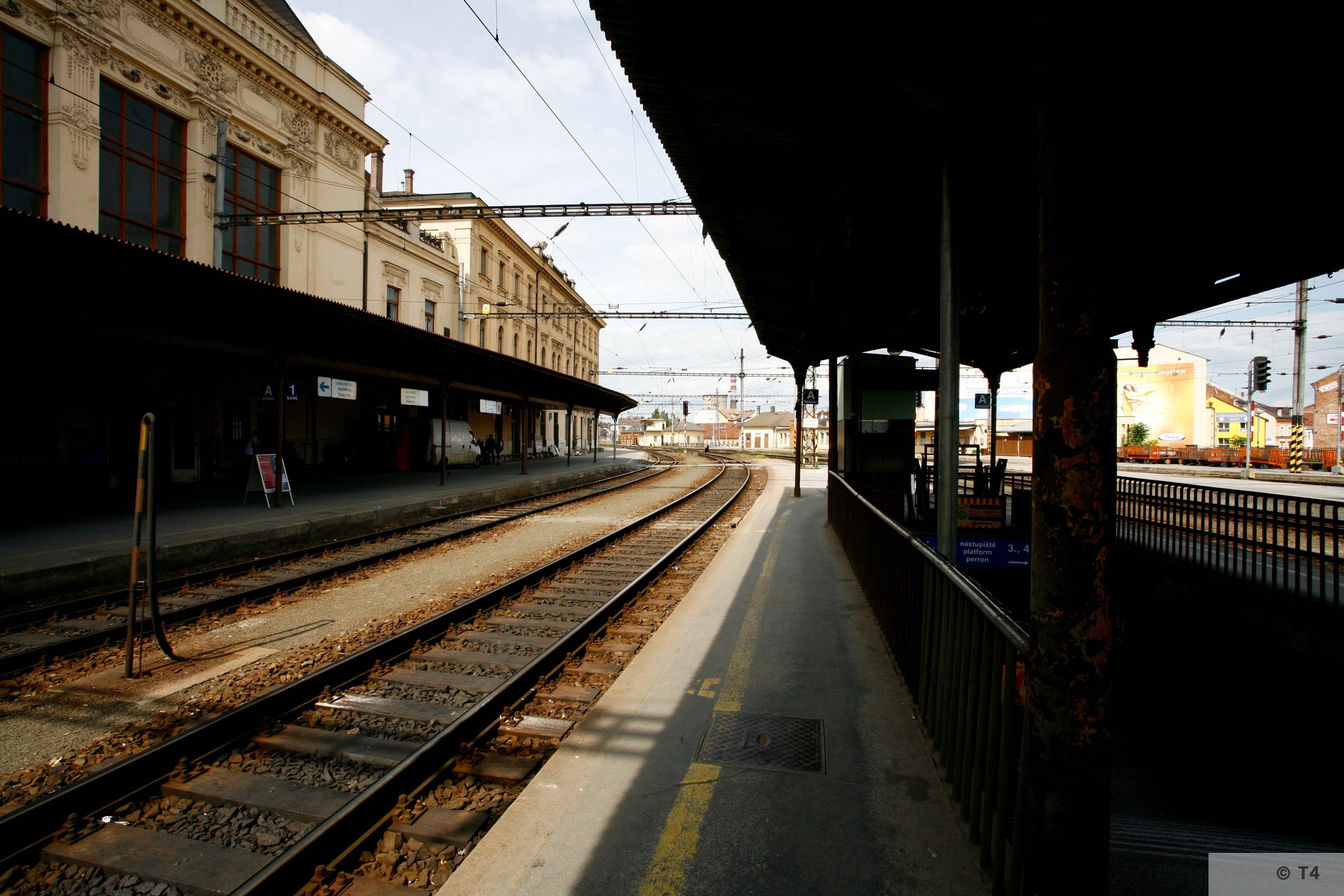 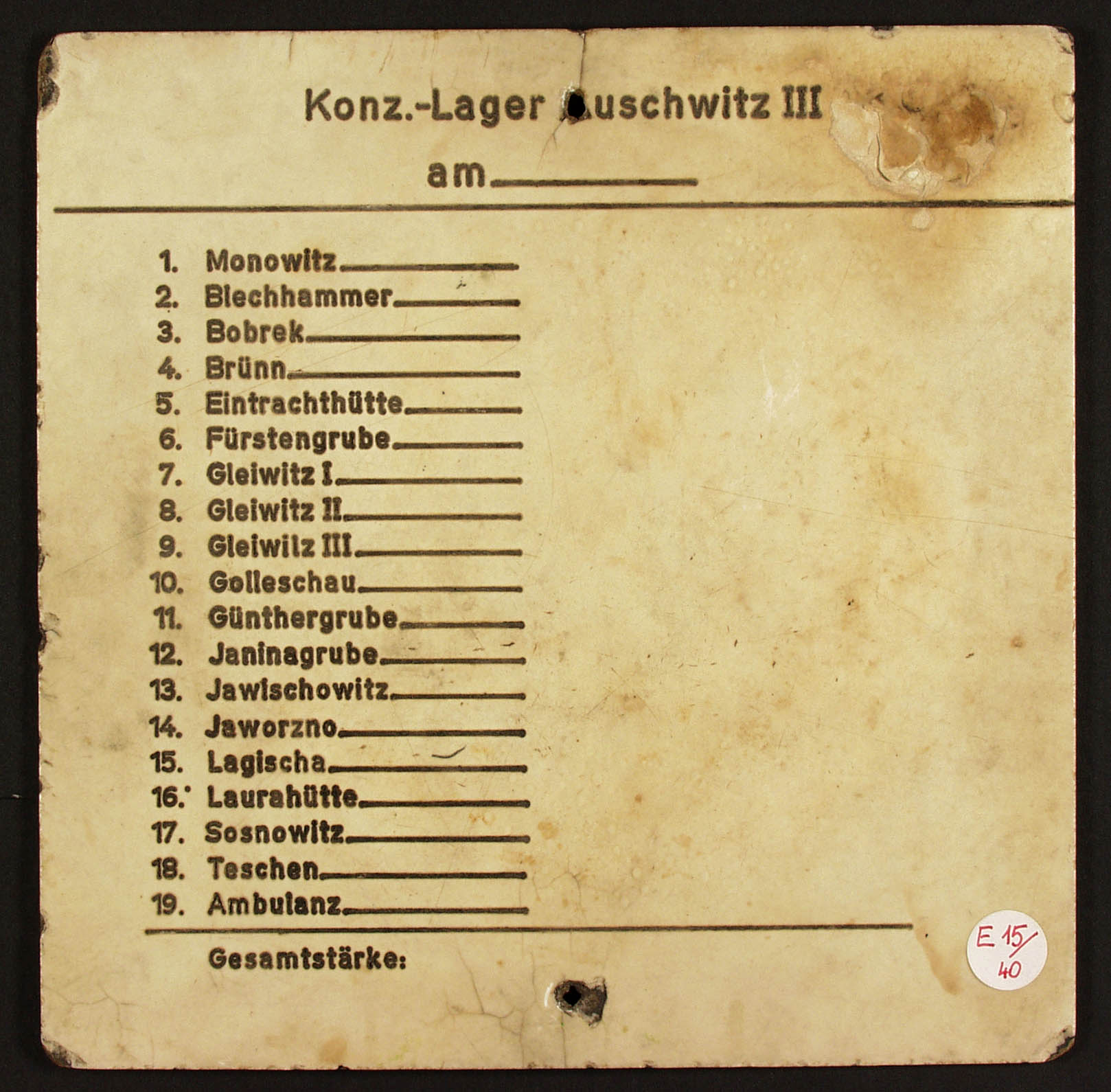